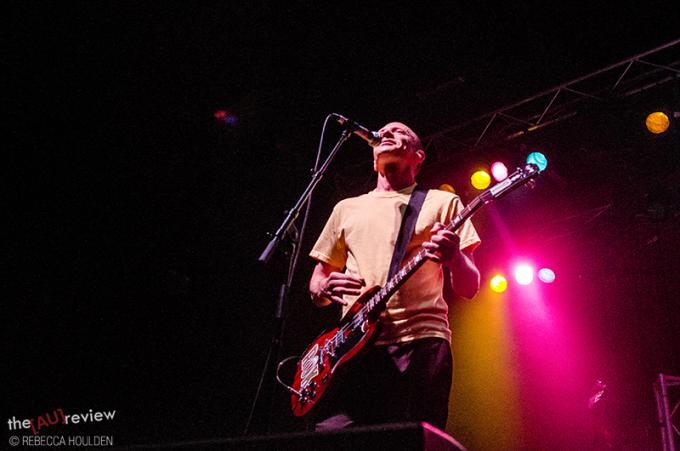 Do you remember when The Presidents of the United States of America took over the world with their self titled debut record back in 1995? I was ten years old when I saw the clip for ‘Lump’ on Rage and instantly fell in love with the band and their ridiculous punk tunes and bassitars.

All of my school books were contacted with magazine clippings of P.U.S.A. II is the first album I ever bought and whilst my taste in music has changed dramatically since then I’ve never forgotten the bliss I found with my first favourite band whose records still have pride of place in my collection. Naturally the nostalgia was running high at HQ where a massive crowd waited for the chance to reconnect with their childhood heroes and the atmosphere was electric.

Warming the stage was Brisbane band Hey Geronimo! who play inoffensive pop that seems tailor made to appeal to the Triple J crowd (which I am not a part of). They are a fun band who played well, they have a good energy, their harmonies were spot on and their cover of ‘Burning Down The House’ was executed with much enthusiasm but given my aversion to their sound I didn’t care for their set.

The lights went down and a voice came over the PA recalling a time when band’s played rock the way it should be played and the room erupted in flailing limbs and screams as Chris Ballew, Jason Finn and newer recruit Andrew McKeag bounced on stage and launched straight into ‘Tiki God’. I went from being a composed adult to a wild hyperactive child in less then 30 seconds happily thrashing around with everyone else in the mosh to the music which shaped my pre-pubescent years. The first half of the set consisted mainly of material from the noughties part of their career which was a delight to the hardcore fans in the crowd. It was after a cracking performance of ‘Mach 5’ that Ballew made all of my kiddie dreams come true as he announced ‘and now we’re going to play the first record in full’ and the punters went mental as they ploughed into the opening chords of ‘Kitty’.

P.U.S.A’s live show is even more hectic and energetic than their studio work and they powered through a sweaty hour and a half of moshing, crowd surfers, mirror balls and one incredibly intoxicated stage invader falling over the amps in a very fun fashion, constantly cracking jokes and jumping around like crazy. They paused the madness for a second to bring out a cake for their biggest fan who follows them on tour and got the room to sing ‘happy 75th President’s gig’ to her and invited us all to eat some later at the merch table. The vibe of the night was a very happy one as the entire audience sang along to every song they played, pulling their lighters out and waving them high for ‘Candy’, and losing their shit entirely during ‘Naked and Famous’, being completely immersed in the awesomeness of the moment.

P.U.S.A encored with a dedication to a dearly departed friend ‘Ghosts Are Everywhere’ and teased us with a cover medley asking cheekily ‘what cover should we play?’ as they went through the opening lines from some of their favourite songs before finally launching into ‘Video Killed the Radio Star’, ending the night on a high with a few chords of ‘Ace of Spades’ before bidding us a final farewell.

Thank you P.U.S.A for a rad night out. Your show was too, too good and it made my ten year old self feel complete. I hope you’ll kick out the jams forever and ever.