Summer may be long gone but Perth’s Factory Summer Festival has been rolling the past few weeks, delayed due to the WA government’s restrictions, with The Presets the latest to grace the stage at Metro City.

Factory has traditionally attracted a younger crowd with its inviting outdoor set-up and trendy image, so this year’s forced move to the mostly indoor Metro City combined with The Presets’ following created a vastly mixed audience from teenagers to oldsters.

It’s easy to forget the Sydney electronic duo have been entrenched in the Australian music scene since 2003 and a lot of their diehards were out for Thursday night’s show ahead of the Easter long weekend.

The masses had piled in at Metro City for The Presets’ 10:40pm start time and were aided by support act Shann, who dropped plenty of pop hits to warm up the crowd before finishing with Empire Of The Sun‘s ‘We Are The People’.

There was a false start before The Presets entered to the cinematic ‘Talk Like That’, with vocalist Julian Hamilton adorned in a red long sleeve tee, alongside his scruffy drummer-keyboardist Kim Moyes. 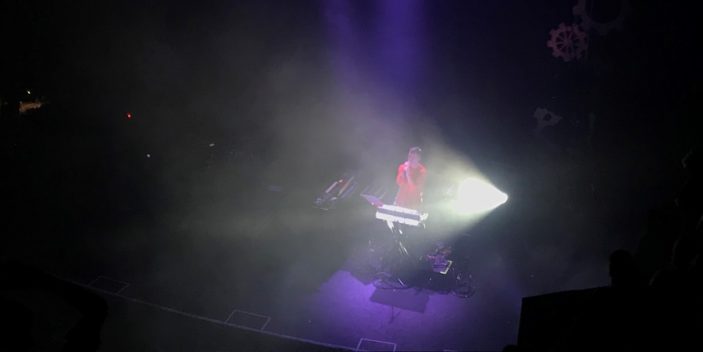 The more recent danceable single ‘Martini’ followed along with 2012 hit ‘Ghosts’, with the quirky video backdrops and lighting a feature.

Julian has never been one to offer much between-song small talk, so the duo kept rolling out the bangers in a fervent nightclub set with heavy bass suiting the tiered venue, later timeslot and frenzied crowd, who felt eager to let loose to start a four-day weekend.

Arguably the highlight of the show was their drawn-out and theatrical version of 2008 ARIA Gold winning single ‘This Boy’s In Love’, which climactically had the crowd lift off.

‘My People’ is a guaranteed party starter too and that didn’t disappoint with the venue jumping under red lights.

After farewelling the crowd as midnight approached, Julian convinced event staff to allow them to play one more, concluding with cult slow-burn hit ‘Anywhere’.

They may both be in their 40s now, so their energy levels aren’t quite what they used to be but the Presets still deliver the hits and deliver them well, with a subdued theatre. It’s hard not to dance at their shows and that’s always a good thing.