I’ve only seen The Killers once before, probably the last time the band toured extensively in Australia – that Big Day Out tour off the back of Battle Born. A lot of fans pooh poohed that album but I embraced the Triple M-ready likes of “Runaways” and “The Way It Was” just as much as I attached myself to “Mr. Brightside” and “All These Things I’ve Done” when Hot Fuss came out in 2004.

Bands need to evolve with their own changing musical influences and tastes. The Killers found their rhythm in the throes of stadium rock euphoria of the early to mid-2000s and here we are now, almost 15 years after the release of their debut album, watching a band – who is most definitely a different entity – thrive on a great fusion of nostalgia and a hunger for the new.

Which is just what their latest album, Wonderful Wonderful is. The essence of The Killers hasn’t waned; Brandon Flowers‘ range for executing anthemic-level vocals is still remarkable, while Ronnie Vannucci Jr.‘s mastery of percussion continues to anchor these massive sounds The Killers have made their own. 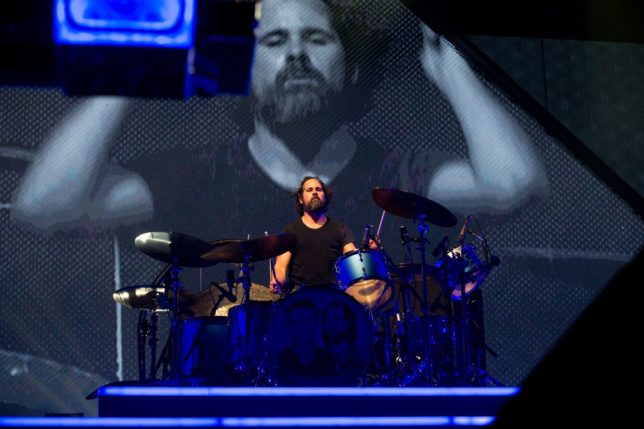 The first night of their three-date run at Melbourne’s Hisense Arena would prove to be a show full of the glitz and sheen, one that had the 10,000+ crowd not missing a beat as lyrics were sung back to the band in force. It reminded me what it felt like to be at a rock concert such as this, and how long it had been since I had been at one on this scale.

“Glamorous indie rock and roll is what I want,” Flowers declared for the first time back in 2004. Watching The Killers shower the arena with confetti early during “The Man”, as Flowers strutted his way across the stage though, it was clear that those dreams have most definitely been transcended.

The megawatt grin rarely leaves Flowers’ face as he ensures each side of the arena floor gets ample time and views of him; it’s quite impressive considering the amount of belting-out of lyrics he does show after show. Flowers may be drenched in sweat, but never does one piece of styled hair move out of place, nor does his embroidered suit jacket (at least, right until the set closer of “All These Things I’ve Done”). A consummate frontman, it’s like Flowers’ job tonight was to assure anyone doubting the new line up’s ability to deliver those same gut punching moments of live music, originally courtesy of Flowers/Vannucci Jr/Stoermer/Keuning, that they were in safe hands. 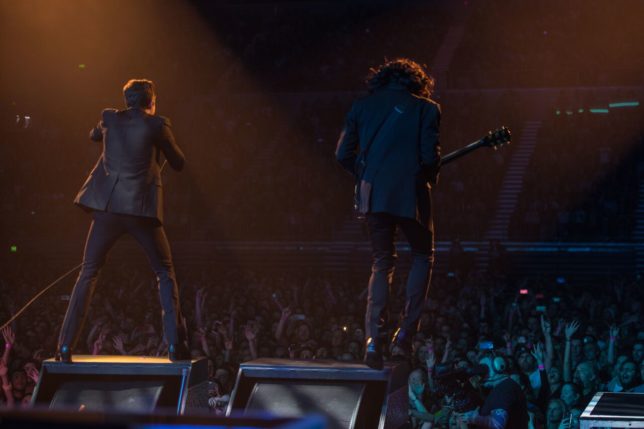 21 songs took the crowd through the classics; from “Somebody Told Me” to “For Reasons Unknown”, the “Shot At The Night” days and back to “A Dustland Fairytale”. The Wonderful Wonderful era was given due time in the spotlight, with the title track, “The Man” and “Tyson vs. Douglas” making appearances to positive responses.

The encore though, was where we all knew the show would properly apex. Though “All These Things” I’ve done is always going to do the job, there’s no way the energy raised throughout the song is going to be quick to dissipate. Returning to the stage in a glittery gold suit (boots included), and donning a pair of aviators, Flowers jumped deep into Elvis territory for “The Calling”.

The three song run finishes with a double whammy of “When You Were Young” and of course, “Mr. Brightside”, which has Hisense Arena peaking. Laser lights and visuals from on stage make the show closer feel like a rave more than a rock show and as I’m sure the band are used to by now, leaving most of the singing to the thousands of people below was the perfect way to tie things up.

The stage soon empty, Vannucci Jr. takes to a microphone centre stage as the crowd continues to holler and applaud. The drummer stands alone, taking a moment for himself. On the screens, it’s clear to see that these moments are why bands like The Killers obviously still thrive as a live unit. He thanks the crowd and it almost sounds like he’s whispering, compared to the bombastic nature of Flowers’ presence over the last hour or so.

With Adelaide (and a secret gig in Sydney) marking the final live shows of this tour, The Killers made up for time spent away and they made sure the crowd left with more than enough to keep them going until we see them next.

The reviewer attended this show on May 4th. Photos by Rob Loud.

Head here to find out how you can see The Killers in Sydney!