While it is often true that Wednesday nights are relegated to early evenings or an easy night in at home, those who ventured from the safety of these homes were rewarded earlier in the week by a mammoth live performance of nostalgia and music with some of modern music’s famous artists spanning the course of half a century stepped into the Melbourne’s music scene culminating with a genre defining group; The Jacksons.

Starting in the early evening with a budding crowd, The Sounds of The Supremes opened at the Sidney Myer Music bowl, the women led group hailing from the sixties and seventies were envoked righteously by the talented tribute band, referencing the group’s many hits. Unfortunately, they only covered an incredibly short set as there was much to come in the evening. The set was completed through a famous rendition of their chart topping “Stop In The Name of Love” single of 1965. For many it was an early dose of nostalgia; the first for the night.

The Sounds of the Supremes were quickly followed by Sister Sledge, still hailing from the U.S. with their original members and a couple of family additions, Sister Sledge were a treat to behold on the stage. The sheer talent of the family quickly becoming apparent, as a band known for their powerful harmonies and catchy hooks, Sister Sledge brought the pop and funk to the bowl.

Village People brought a set of fun to the bowl with their energetic music and disco vibes; While much of the face of the band had changed the original vocalist, Victor Willis still fronted the group. They were a hotpot of jazz, classic disco, funk and r’n’b all mixed into one group alongside the outrageous dancing of their backing singers better known as the costumed members with the Native American, GI Joe, Leather Man, Construction Worker and Cowboy all picking up the backing vocal roles.

Much like the other artists of the performance, it was the tracks people grew up with that made Village People’s set memorable as they pulled out “In The Navy”, an early set rendition of “Macho Man” and a closing run with “Y.M.C.A” that frenzied the crowd as they sung and action-ed along with the track.

The Pointer Sisters held their own against the mammoth lineup of the night, with the group, now made up of the newer family members of Ruth Pointer’s lineage were still able to breathe a little of the magic held by the original trio. The trio’s early R’n’B styling weren’t lost on a crowd attending for a dose of seventies recording nostalgia sang wholeheartedly with The Pointer Sister’s tracks.
The sister’s themselves had an excellent set, manoeuvring through some of the famous tracks that the early trio released with “Jump” and “He’s So Shy”, making a fun atmosphere amongst the crowd before their truly heart stopping fan favourite, “I’m So Excited” closed out their set.

Kool & The Gang were the lucky lot to hold the main opening position for The Jacksons. Their set was exciting and it was easy for anyone in the crowd to tell the band was having just as much fun as the punters standing in their seats.
Holding out on stage for near on an hour, Kool & The Gang’s set once again activated that large sense of nostalgia which was a constant presence through the night, their set was tight, as the band with members new and old played with a heavy sense of experience and a good vibe. “Get Down On It”, “Jungle Boogie” and “Hollywood Swinging” were just a few of the band’s long list of hits that made it to their set list, making it a list of strong horn filled tracks capturing the full essence of the band.

Kool & The Gang closed on one of their most well known party numbers, “Celebration”, the track used on movie soundtracks and an obvious karaoke choice closed the set with a win. The reaction from the crowd for the song emulated its title, with what could only be called a celebration occurring in the sea of people up on the Sidney Myer Music Bowl’s lawn area, while a large congregation of fans pressed their luck at the barricade.

Finally, it was time to see what many had solely come for; The Jackson’s once one of the largest disco/pop powerhouses of the seventies and still easily in the front of mind for many arrived on the Melbourne stage. 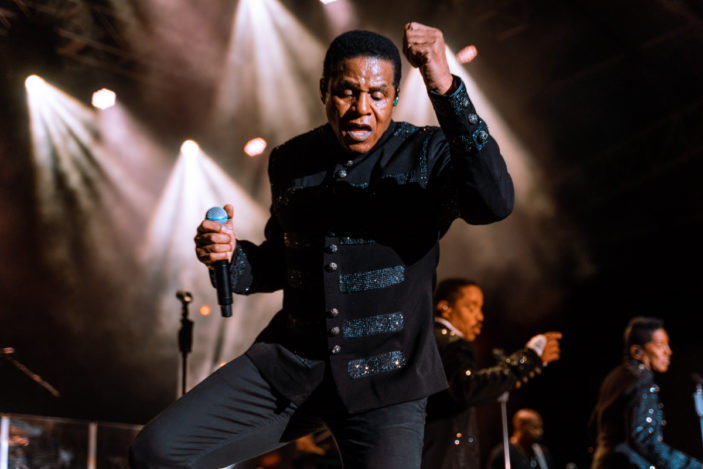 With the early inclusion of “ABC” one of their chart toppers in the groups heyday, it was easy to see the party restart after the break between them and Kool & The Gang. The Jackson’s had clear stage presence easily controlling the sway of the crowd. Even after near fifty years of touring, the coordinated dancing, their smooth vocals and brilliant harmonisation seemed to have not lost a beat and worked to create a perfect show which could be a once in a lifetime chance for much of the punters eager to see them.

The four brothers, Jermaine, Jackie, Tito and Marlon were sublime, with their set list especially chosen to show off their synchronised styling as well as each brother’s individual strength. “Got To Be Starting Something”, “Can’t Let Her Get Away”, a tribute to late brother Michael, “Heartbreak Hotel” and a thrilling Jackson Five medley were all massive inclusions to the groups set and made for an enjoyable hour set.

The foursome and their band closed on “Shake Your Body Down (To The Ground)” off of the groups Destiny album back in 1978. It was a wonderful closing salvo, with Marlon rallying the crowd to follow along with the song dancing and singing to help the group close out the evening.

Tags: Four Stars, Kool and the Gang, Sister Sledge, Sounds of the Supremes, The Jacksons, The Pointer Sisters, Village People