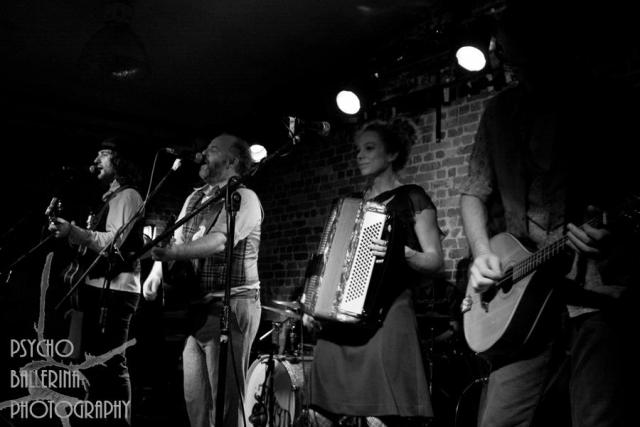 Things looked a little sombre at the Sando to begin with. Normally it’s the rain, but tonight it seemed to be the heat keeping the punters away. I thought I had turned up slightly late, but the lady at the door eased my mind when she told me the opening act had not yet commenced.

Turns out that zucchini roll at Saray was well and truly justified. After briefly introducing myself to the headliners, who were enjoying hamburgers from the milk bar next door with great gusto, it was time for the opening act.

John Kennedy can most easily be described as a syncopated Blues Balladeer with a wide ranging East Coast appeal. Older generations would of course be familiar with his output from the 80s onwards, though I am somewhat embarrassed to admit I had not yet come across his material. Ah well, it’s never too late. At first he described most of his songs as being about “leaving Brisbane”. This may be true to a certain extent, but there was also plenty of inner west appeal with kudos given to Newtown in “King Street”, and “Ghost of Newtown”, the latter being written in St. Stephen’s Cemetery while contemplating the eternal. “Miracle in Marrickville” also struck the heartstrings of a lad who grew up in and around the now increasingly trendy suburb. Midway through Kennedy’s set the crowd built up to a more heartening number.

When Belly Ache Ben and the Steamgrass Boys took to the stage, it was evident they had undergone somewhat of a personnel change since they supported the Rumjacks at the Townie. Despite the addition of a banjo and double bass player, I knew I would not be disappointed. The double bass adds that additional thunk that seemed to be missing with the old resonator bassist who was nonetheless a genius player. Luke, the new banjo player attacks the instrument in clawhammer style, which as Ben explained after the show suits their sound to a tee.

Having a penchant for traditional classics, the boys outdid themselves with the Gospel number, “Wade in Water”, as well as providing a comic edge with the original, “Mother Got the Morphine, Daddy Got the Car”. The four part harmonies are as strong as ever, making it paramount for every good music-loving citizen to see this band live at least once. Although I could have watched Ben and the boys play all night, the on stage rapport for which I fell in love with The Good Ship immediately jogged my memory as to why I had attended the evening. The first single, “Seven Seas”, off their recent album O’ Exquisite Corpse was played early into the set.

Geoff, the ship’s multi instrumentalist and self-appointed hype man began running around the audience, wildly clanging a ship’s bell in time with the music, effectively transferring the on-stage excitement to the punters. Later in the set he produced a Lagerphone, which like the bell, needed absolutely no amplification.

The story behind the new single, “Sin City Sweetheart”, which was being promoted on the night is something rather unique, as well as something I have experienced first hand. Although I never picked up on it from listening to the album. When walking through the Strip in Las Vegas, diminutive Hispanic hustlers incessantly flick what appear to be collector cards in the faces of passersby. On closer inspection these turn out to be business cards featuring various prostitutes, who as the song points out, have nothing to do with the final product which visits you in your hotel room.

I noticed this when one of the ladies featured on a card I was given in 2009 was the same as a model from a 1992 issue of Penthouse I had acquired in my misspent youth. Needless to say I didn’t go there. Other highlights of the set were the resourceful “Somebody Took My Baby”, as well as “Powder Monkey”, and “Glory” with its catch phrase of “Now who’s fucking who?” The coup de grace came in the final medley, which worked in various lyrics from the Spice Girls “Wannabe”, to Vanilla Ice’s “Ice Ice Baby”. Oh so wrong, but oh so right.