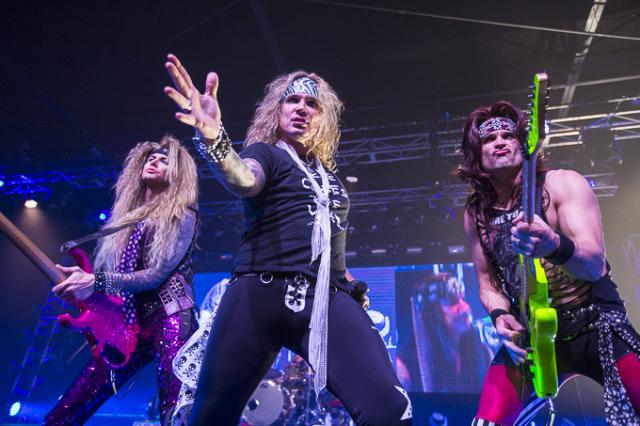 When you name your tour Spreading The Disease and feature some of America’s leading acts to deliver big riffs and big vocals and big hair, you can expect nothing less than a hilariously stellar rock show.

Our openers Fozzy have been around for 14 years but have only ever toured Australian shores twice. Considering the sizeable audience already inside the Hordern to see them, those times obviously impressed them enough to make their way in early to see the Georgian metal rockers. Lead singer and sometimes professional wrestler Chris Jericho riled up the crowd with a hearty ‘Fozzy Fozzy Fozzy, Oi Oi Oi’ chant and tracks like “She’s My Addiction” and “Sin And Bones” and “Enemy” were clearly well received. It’s immense, ballsy metal and a great way to start the night.

Next up Buckcherry who are that middle ground between our openers and our headliners. Their songs are a bit more melodic and structured than Fozzy but lyrically they’re quite similar to Steel Panther with the occasional questionably offensive subject matter popping up in the songs. As somebody who hasn’t heard either of the supports, I enjoyed Buckcherry’s performance a little more. Most likely because they’re a little easier to dance to and their songs are catchy. “Lit Up” and “All Night Long” and “Gluttony” have an equal balance of big electric guitars mashed up with a thumping drum beat. Whilst tracks “Everything” and “Sorry” showcase their power ballad side, it’s still commanding but with a softer touch and the latter in particular gives the crowd a chance to raise their lighters or mobile phones in solidarity. They rounded out their set with one of their biggest hits “Crazy Bitch” and with lyrics like “Hey, you’re crazy bitch but you f*ck so good I’m on top of it, when I dream I’m doing you all night” it’s a near perfect segue into our headliner’s performance.

So if you’re not familiar with Steel Panther these guys are basically a parody glam rock band with some of the most profane or offensive songs about women, sex, drugs and rock and roll you could think of. It’s important to remember though, it’s all fun and games and everybody knows it’s done tongue-in-cheek, mainly because it’s kinda hard to take a bunch of 40+ year old men wearing sparkly tights, leopard print bandannas and guyliner seriously.

They kick things off in a big way with “Eyes Of A Panther” and back it up immediately with more big sounds in “Tomorrow Night”, the latter featuring hilariously cobbled together images on the video screen to match the lyrics about a grand party that will happen the next night but until then it’s all Angry Birds and masturbation in the meantime. The ridiculous video montages kept coming with “Asian Hooker” featuring geisha girls giving blow jobs and sushi shaped like penis, hilariously racist but if you’re not moshing along to the enormous beats delivered by drummer extraordinaire Stix Zadinia then you’re just not having a good time.

Another highlight was “Let Me Come In” with an epic face melting electric guitar solo from Satchel that had the crowd screaming for more. We were even treated to a brand new track “Party Like Tomorrow’s The End Of The World” from forthcoming record All You Can Eat and if you missed seeing bassist Lexxi Foxx swanning about in his fuchsia pink leopard print pants, or letting his hair be blown by the onstage fan or touching up his lip gloss you missed something fabulous.

Songs like “It Won’t Suck Itself” and “Death To All But Metal” showcase the reasons why the band is so popular, they’re both entertaining and ridiculously adept at playing their respective instruments, and manage to seamlessly combine both effortlessly. Though when you’re watching Stix Zadinia playing a grand piano, and Michael Starr crooning softly about a “weenie ride”, you can’t help but laugh your ass off. There were even moments during the show when the band took time out to throw some banter in, it was like being let into the backstage dressing room as they bitch about each other or discuss the merits of Australian women as potential sex partners.

The closing three tracks in the encore , “Community Property”, “Party All Day’” and “17 Girls In A Row’” really bring everything to a proverbial head. With a bunch of topless girls running around onstage that had been invited up out of the audience it’s loud, brash and full of testosterone fuelled bravado and drives the audience crazy. If you didn’t walk out of the show with a smile on your face, then you’re dead inside.