Live Review: Snowtunes was a mega festival in a winter wonderland where Aussie acts shined

It dropped to 4 degrees both nights of Snowtunes 2018, so what did the organisers do to combat the crowd getting frozen? They assembled a lineup that would be sure to have the audience dancing, rocking and partying for hours on end. With pyro and Co2 cannons for nearly every set and boasting the likes of Rudimental (DJ set), Hockey Dad, Violent Soho, The Smith Street Band, Meg Mac, Confidence Man, Slumberjack, Ducky, Bec Sandridge, Set Mo, Miss Blanks, Carmada, 4B and Thundamentals to name a few, Snowtunes cemented why they should be at the top of your destination-festival trips. 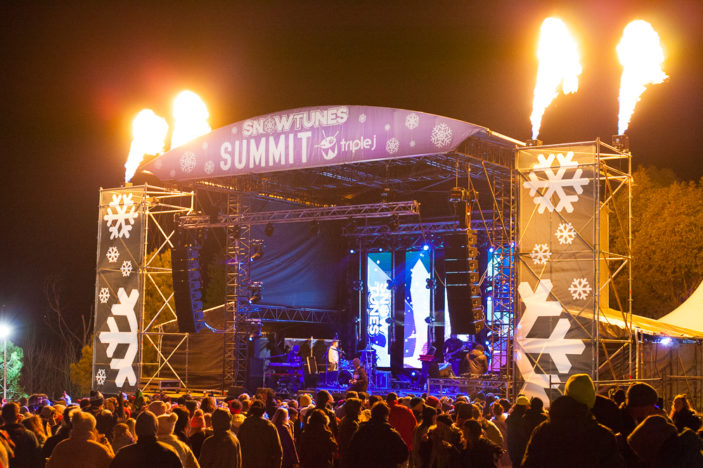 Located in Jindabyne (20 minutes from the Perisher ski tube and 40 minutes from Thredbo) the clean, crisp and gum-tree scented air was cold but never uncomfortable; it made for a completely unique festival experience. Parkas, scarves, gloves, beanies and retro snow-gear was the fashion of the weekend. 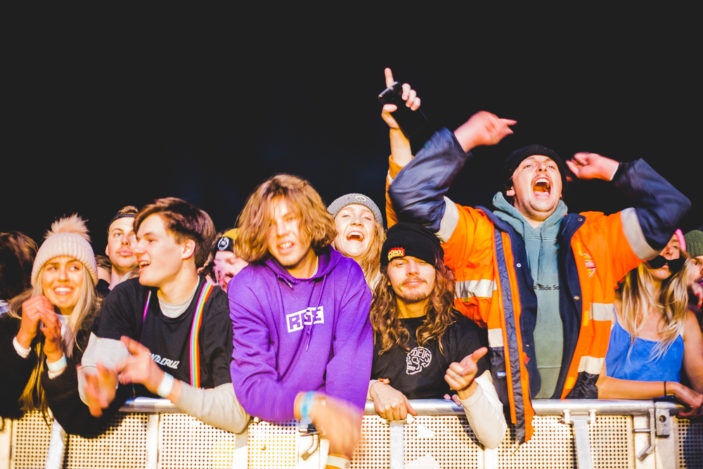 Canberra’s BentSpoke Brewing Co. hosted a snowboard rail comp on both days that saw the crowd 6 people deep on all sides of the mini-slope. 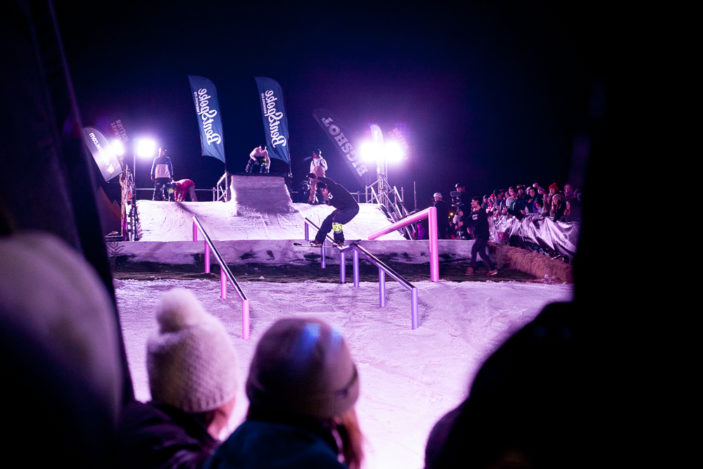 Friday had a heavier rock presence versus the electronically charged Saturday. Accompanied by just a drummer and adorned in a purple coat, Bec Sandridge swaggered and strutted through “In The Fog, In the Flame” as the frantic drums complemented the jogging patrons who were now heavily flowing through the gates and immediately joining the mosh. “I Belong Here” was naturally a welcomed, raving success for Set Mo who warmed up the stage for Las Vegas dubstep master Ducky. She was a pure fireball of energy and her set of filthy and heavy drops created the rowdiest crowd of the night. Wollongong duo Hockey Dad proved why they’re one of Australia’s best acts as they rocketed between “I Need a Woman”, “I Wanna Be Everybody”, “Seaweed” and “Join The Club.” 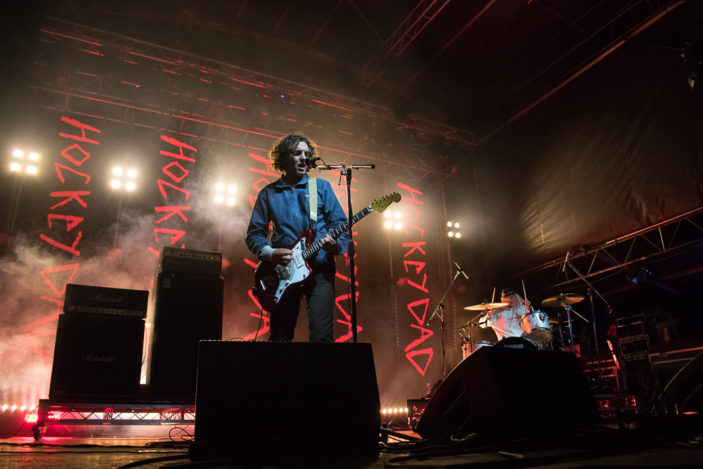 Unfortunately, the mix for The Smith Street Band was poor and lead singer Wil Wagner could barely be heard for most of the set. “You can’t hear my vocals? Yeah, everything’s fucked up back here, we don’t know what’s going on,” Wagner said after the crowd cried for his vocals to be increased. 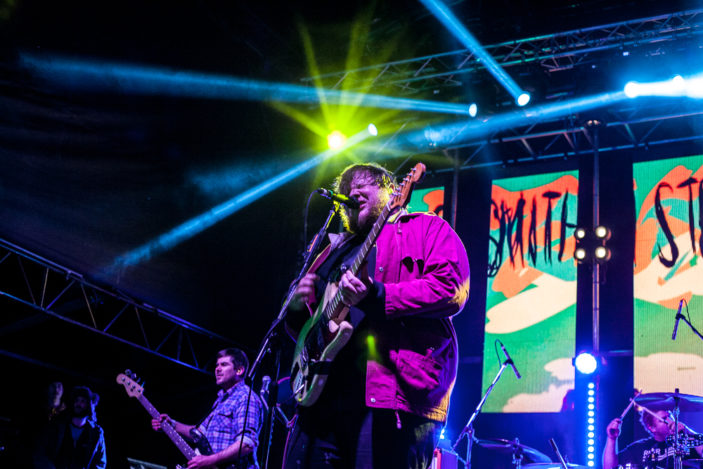 Slumberjack’s cover of Outkast’s “Ms. Jackson” and original’s “RA” and set-closer “Fracture” were partnered with flames from the top of the stage and Co2 cannons for the core-pulsing drops. Thundamentals made numerous impassioned please for love and peace in the world and dusted off their six year-old Like A Version cover of Matt Corby’s “Brother”.

Over the course of a few hours the temperature had dropped from 7 degrees to 5 but that wasn’t enough to make Violent Soho lose any of their electricity. Lead singer Luke Boerdam furiously flung himself in and out of the microphone through set-opener “Viceroy” and “Like Soda.” The Jindabyne crowd thrashed and head-banged for their entire 75-minute set. American DJ 4B closed out day one with more orchestrated builds and drops where originals “Pop Dat” and “Whistle” pulsed raging vibrancy.

Two fire stations and a range of food trucks were spread around the festival grounds to keep patrons warm and fed. 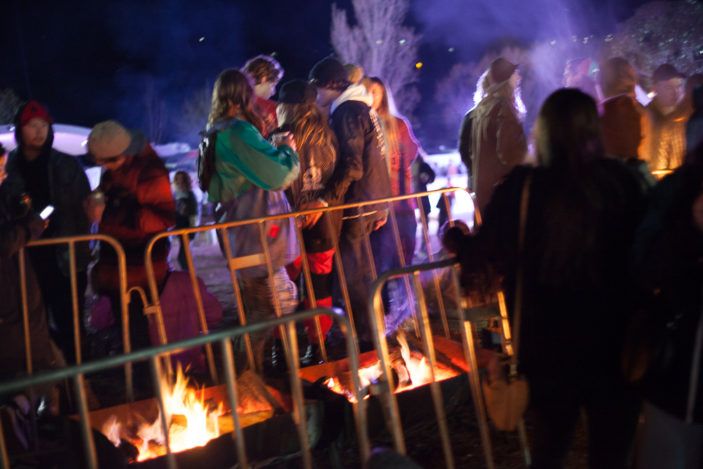 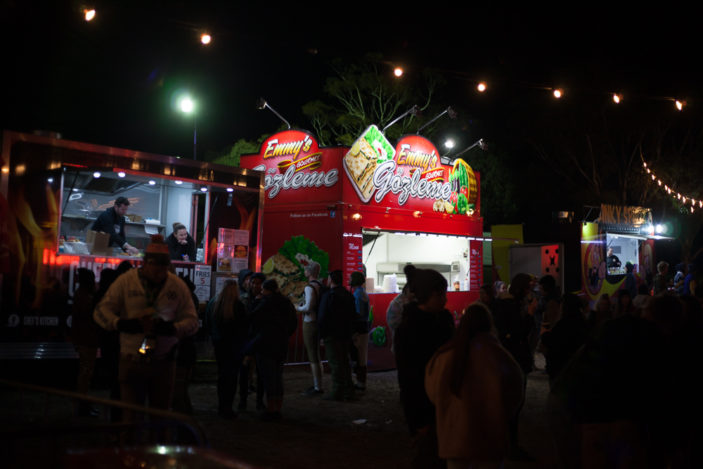 Silky beats that are impressive enough to stand alone and be played by a DJ lay beneath Miss Blanks‘ contagious flow. Meg Mac was continuously graceful and effortlessly floated through 2017’s “Low Blows”, “Roll Up Your Sleeves”, “Grace Gold” and “Maybe It’s My First Time” to a swooning crowd. Yahtzel began his set by giving a “fuck you to Virgin Australia” for messing his “shit up” and forcing him to take the stage an hour late. But that hiccup did nothing to impede on the crowd’s love for him as the beanie wearing DJ tore into his Peking Duk remix of “High” as well as original “High With Me” where he performed on his drum pad for most of his set. Confidence Man‘s dance routines were lovingly adored by the crowd as the duo’s never ending energy was transferred into the mosh.

Aussie DJ duo Carmada, who were a special addition to the festival last month, opened with Fatboy Slim’s “Right Here, Right Now” and transitioned into Fisher’s “Losing It” which was also played by Rudimental during the opening of their DJ set.

A single trumpet player accompanied the DJ set, but without the full band the headline mix felt empty, especially when Rudimental songs were played and it was realised how perfect a full-band live performance of the songs could have been. 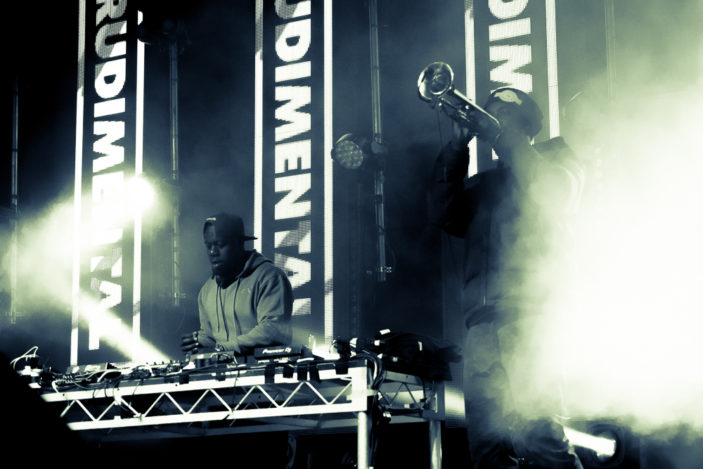 There was a healthy mix of rock and electronic artists and the heroes of the festival were undoubtedly Australian acts who filled out the majority of the lineup; Snowtunes 2018 had a lineup that could rival any major festival in a capital city. It’s distance from major cities should not be seen as a deterrent, but instead it added charm and uniqueness to what has undoubtedly, and deservedly, become one of the countries premier road-trip music festivals.

Snowtunes took place in Jindabyne, NSW, on August 31st and September 1st, 2018. The event will return in 2019 and for more information you can head HERE. Photos by the author.