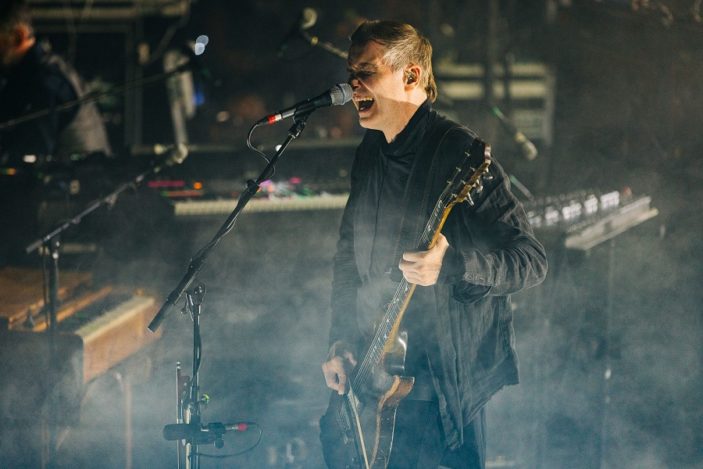 It’s really not fair that Sigur Ros lives over there, and not over here. The iconic Icelandic band is still one of the most unique live acts in the world, regularly spurring these incredible live performances that are forever stamped all across YouTube above an invariably adoring comment section built with praise like “life-changing” and “pure art”. The live videos attract these comments not because Sigur Ros is the head of some sycophantic fandom, but because the songs they bring to life on stage really gets at the notion of how powerful music really is.

I said this often. Art helps you speak to yourself in ways you wouldn’t otherwise know how. The profound impact music can have is perfectly demonstrated each time you listen to something like “Festival” or “Star Alfur” – contemplative, haunting and poignant works of art that are, importantly, not able to be understood from a lyrical point of view. And this is a crucial point. Because lead singer Jonsi floats over tracks in Icelandic (or Hopelandic in some cases), he gives listeners a palate on which they can truly express themselves and their own thoughts. Intelligible lyrics tell you what to think; unintelligible (to anyone who doesn’t understand Icelandic, of course) lyrics let you think.

Eternally, this has been a constant theme throughout Sigur Ros’ incredible body of work and it’s why the band is still held in such high regard amongst music fans around the world. Rocking up to their one show at the Aware Super Theatre in Sydney’s Darling Harbour, I shouldn’t have been surprised by just how crowded it was. But I was, even as the show came to a close with around 9,000 people leaping from their seats in a long, well-deserved standing ovation.

Sigur Ros hasn’t been nearly as prolific as they once were, and yet this was clearly a capacity crowd, packing into the theatre that is beautifully built to offer the acoustics necessary for such a concert. Each and every one of those people would have walked away completely satisfied (unless you wanted to hear “Hoppipolla” or “Star Alfur”) – Sigur Ros gave us almost three hours, split into two parts with a very beautiful intermission. Yes, even the intermission was beautiful.

The first act – mostly full of Sigur Ros’ softer moments coupled with a few pops of maniacal industrial noise but always spun together beautifully by a light and visual show that aligns with the ethereal quality of their music. This was a true audio-visual experience, on par with some of the greatest live bands that I’ve seen in my lifetime. It was certainly more elaborate and considered than the two previous times that I’ve seen Sigur Ros live.

And with the visual in-tact, you had Jonsi front-centre – screeching, moaning and clawing his way through songs like “Ny Batteri” and “Svefn-g-englar,” well-loved Sigur Ros songs that were stretched and reshaped to offer deeper, darker textures. Bass isn’t something I readily associate with Sigur Ros, and yet as sub-bass rolled around the theatre I could feel it in my chest, deeply impactful in a way not even the most contemporary pop or hip hop act could manage.

That was a constant theme throughout the concert – rebirth. A lot of these songs were killed off and brought back to life with a grand sense of theatre. Even something as studio-faithful as “Sæglópur” sounded bigger, more urgent – Jonsi’s nomadic voice thrown across the theatre, bouncing off the walls and hitting us from all sides.

The concert was impressive enough, especially with the furious finale of “Popplagið” – a truly breathtaking build-up and release that would have Thom Yorke seething with jealousy – but what really made this night special was how the band’s defining trait still came through. That is, the sense of place that’s caked into their music, bringing us to the otherworldly landscape of Iceland and making us feel the elements as strongly as we felt our own emotions.

That’s no assumption on my behalf either. Sigur Ros has a way of destroying you and rebuilding you all at once. As I looked around – people embracing each other, holding hands, rocking mindlessly, I’m reminded of just how powerful music is. Again, it’s not fair that Sigur Ros is not based in Australia. This is something we should be witnessing regularly, and here’s to hoping the band returns sooner rather than later.

Sigur Ros performed in Sydney at the Aware Super Theatre in Sydney on the 12th of August 2022. For tour dates in Singapore this week and beyond, head HERE.