It’s only been two months since Fremantle indie-poppers San Cisco released their fourth studio album Between You And Me and for the past fortnight they’ve been making hay while the sun shines with WA’s relaxed restrictions with a series of the shows, the latest on Saturday night at Freo Social.

Saturday night’s gig was actually San Cisco’s fifth (all sold out) of the tour having performed the previous two weekends back-to-back outdoors at the gorgeous Fremantle Arts Centre, so on an oddly wet November evening in Perth’s dockside town it was timely to be undercover.

Supported by Stella Donnelly and Adrian Dzvuke, San Cisco unleashed a heap of their new tunes off their latest album along with their ‘old’ hits and a wonderful all-in Tears For Fears cover which stole the show. Fresh from an album release, it’s always a delicate balance to strike between the new and old, particularly on the fifth leg of a tour in the same town, albeit your hometown.

Pink-clad local fave Donnelly warmed up the punctual crowd, particularly sparkling with a costume change before a delightful cover of John Paul Young’s “Love Is In The Air”.

Stepping on to stage backed by Sheryl Crow’s “All I Wanna Do”, San Cisco launched straight into Between You And Me’s INXS-like opener “Skin” and popular 2018 non-album single “When I Dream”.

Lead singer Jordi Davieson, looking like Freddie Mercury with his tight, tucked-in white singlet, slick hair and gyrating dance moves, greeted the crowd after two tracks, graciously acknowledging “how lucky we have it in WA” to be playing live again.

After blasting out Gracetown hit “About You”, quietly spoken guitarist Josh Biondillo and bassist Mitchell Benson took a seat, with lead vocalist Davieson left alone for the emotion-charged “Flaws”, which showcased his range as he reflected on his first lost love.

Drummer Scarlett Stevens, who along with Davieson worked the crowd in between songs, took centre stage to lead the poppy “Messages” much to the crowd’s delight, before reverting to the backseat again.

There’s a sweet innocence about Stevens, while as a lead Davieson swoons around on stage with confidence but lost the crowd at times between songs, albeit attempting to explain the background behind certain songs. Meanwhile, Biondillo is a reserved master of his craft in his own world on guitar. Essentially as a three-piece, their idiosyncrasies make for an unusual dynamic. 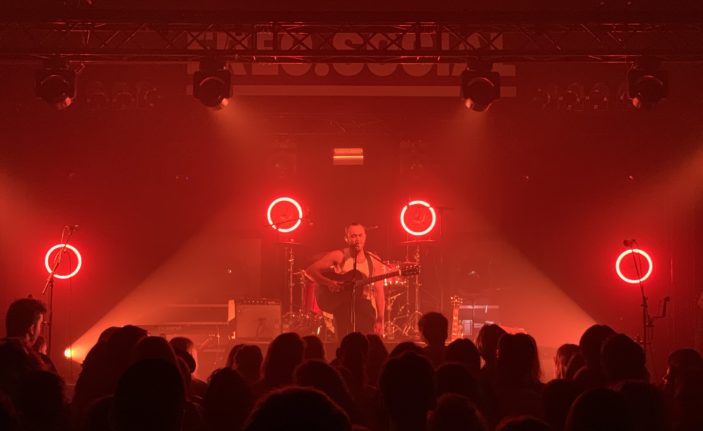 The show lifted off past the midway point as Davieson dumped the guitar for the tamborine and traded vocals with Stevens for hugely popular 2011 hit “Awkward”, which has enjoyed a resurgence lately via a KFC ad.

Arguably the high point was when Davieson brought all the support acts on stage at once for a wonderful rendition of “Everybody Wants To Rule The World” where both Donnelly and Dzvuke led choruses. With almost a dozen people on stage enjoying themselves, it felt like the party had started inside the Freo Social hall and that energy was infectious for the crowd.

After Davieson showed off his one-handed guitar skills alone to start the encore, San Cisco sent the crowd home happy finishing a pair of their older favourites ‘Fred Astaire’ and ‘Too Much Time Together’.

THREE AND A HALF STARS