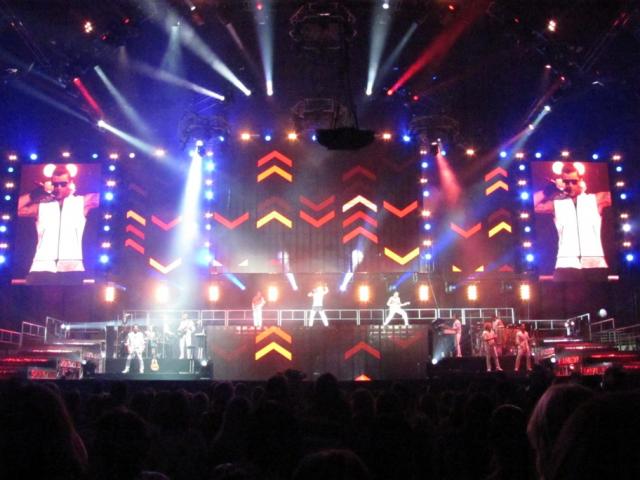 Sometimes you forget that Ricky Martin has been a stalwart of the entertainment industry for the last near 30 years. He’s an accomplished and successful singer, songwriter, actor and even an author. Tonight he’d be showcasing his greatest hits which have put him on the map as an entertainer and I don’t think there was a single audience member that didn’t get up and shake their hips a little at least once over the course of the night.

Originally, we were supposed to have been treated to Timomatic as the opener however, due to unforeseen circumstances, this wouldn’t be the case. I was indeed a little disappointed at this, since DJ Kid Massive was the fill-in and probably barely registered amongst the crowd. It was a shame really, as he was cranking out a bunch of notable Top 40 hits that were mixed well and blended in seamlessly together. But it just all seemed like the backing music they were playing before he even came onstage, and after he even finished his set, and just felt a little pointless.

Once the house lights went down, the giant curtain dropped and our man Ricky Martin strutted out onto the stage to his brand new single “Come With Me” with his backing dancers, everybody donned in white except, for Martin’s black fingerless leather gloves. It was interesting to see Martin swagger about the stage; he was clearly conserving energy as he let his dancers do most of the OTT dance moves whilst he executed his singing. He keeps the room on their feet with “Shake Your Bon-Bon” and “Loaded” which even gave him enough time to sneak in a quick semi-costume change by ditching his jacket and throwing on a pair of Ray-Bans. I suspect the next song was “El Amor De Me Vida” as my Spanish is a little too rusty to catch all the lyrics. Nonetheless, we were treated to Martin’s smooth sensual vocals as he crooned the ballad and the audience collectively swooned. Though I have to say I was a bit perturbed by the weird lighting truss that looked like an alien shuttle hovering over him, and as he descended by a trapdoor in the floor into the stage we were left wondering what would hit us next.

The energy got turned up again as a 1920’s jazz number with some Gatsby-like art-deco visuals on the projection introduced “Livin La Vida Loca” and then that lead straight into “She Bangs” where Martin’s female dancers got the opportunity to gyrate and thrust all over him and probably had every single lady in the audience feeling like they wish they were his dancers.

As part of Martin’s extensive resume he took up the mantle of coach on this year’s season of reality-talent-quest The Voiceand two of his proteges ended up joining him onstage. Firstly, Luke Kennedy, who took the lead in a duet of “She’s All I Ever Had” which was quickly followed up by a medley of “Come To Me” and “Private Emotion” where Miss Murphy also joined the two gentlemen, they then wrapped up the trio’s sing-a-long with “Nobody Wants To Be Lonely”. Where Miss Murphy’s soulful voice melts together with Kennedy’s and Martin’s tenor’s and it’s clear that the audience is enjoying the three of them onstage together, as the rapturous applause thanks them and they all collectively descend dramatically via trapdoors in the stage to disappear.
Martin returns to then perform a few numbers in his native Spanish, and even though most of the audience may not know the words, there’s still plenty of hip shaking like they’re all wearing hula hoops. His backing band consists of a backing singer, bass guitarist, drummer, keyboardist, guitarist, percussionist and three piece brass section. That’s a lot of bodies onstage and not even including his eight backing dancers, all of whom are just as full of energy and fervour as our main man who has definitely kicked things up a few notches since the opening number.

As we reach the closing numbers it’s clear to see that Martin focuses his energy on his more uptempo numbers and the crowd loves him for it. Any time he would wiggle his hips or his shirt would lift up to reveal a bit of midriff, the ladies in the crowd would go wild. He’s almost constantly smiling and as he belts out “The Cup Of Life” to close the night, it becomes a true party atmosphere and everybody gets to walk out of the arena with smiles on their faces too.