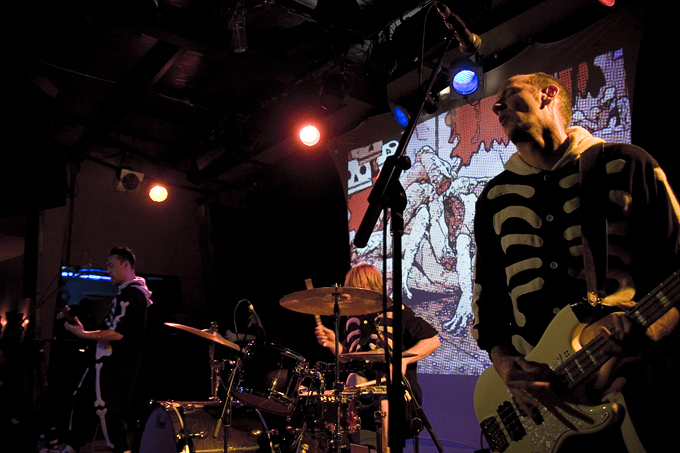 It was just bad luck that the night I was set to see Brisbane Oz music princes, Regurgitator play the Gov was the same night I chose to eat some bad chinese.The irony was not lost on me, as I took a seat in the dimly lit and still sparsely populated venue, determined not to let the waves of nausea ruin my evening. Tonights bill was a full one, as Regurgitator tour in promotion of their new album SuperHappyFunTimesFriends, accompanied by three support acts.

Adelaide outfit The BottleRockets were the opening act for the evening. They started the festivities off by spinning some Dee Lite and Salt’n’Pepa just to warm up the slowly-forming crowd. Like many mid-week gigs on chilly nights in Adelaide, the punters were still making their way into the venue, via the bar, at this early stage of the evening. The duo didn’t seem too put-off by the empty dance floor, and played a set that seemed to be suffering from ADHD, shifting between electro-dance numbers with flourishes of hip hop, accompanied by bass and guitar. Their off-beat lyrics have a bit of the Bloodhound Gang about them, with lines like: “listen up ladies, if you wanna have these babies.” They were clearly thrilled to be supporting Regurgitator and were giving this gig their all, behaving like they were the headlining act at a festival. Even climbing on top of amps. THis is a good thing, and how every support act should behave, really.

Boys Boys Boys! a six-piece act from Perth, were next to the stage. There were three girls and three guys on the stage, yet the fellas seem to slink shyly to the back when faced with the ultra-bright smiles and outfits of their female counterparts. These kids love pop-music, they make this perfectly clear. They also love to dance, often in union, perhaps reliving those preteen years of making up routines to Backstreet Boys numbers, when hairbrushes were microphones. Their Triple J Unearthed profile lists their influences as CSS, B52’s and Le Tigre (who are one of my favorites, also). Their sound does have a slightly Riot Grrrl-cross-60’s pop thing going on. Their songs are catchy, their vibe is lively and they looked like they were having the absolute time of their lives.

The last of the “fun times friends” was up next: one of New Zealands’ premier electronic artist Luke Rowell, aka Disasteradio. I’ll admit that I mistook Rowell for a roady momentarily, as he unceremoniously took to the stage, flanked on both side by keyboards and soundboards. Carving out a niche for himself in his homeland, Disasteradio’s 2010 album Charismahas been very well received. Although this is dance party music at its finest, with numbers like ‘Awesome Feeling’ and ‘Gravy Rainbow,’ it is hard to take him with anything other than with a pinch of salt. Playing his “sexy” jam called ‘Charisma’ (which consisted of Rowell moaning that word through a vocoder over and over again), watching Disasteradio felt like seeing the “comic book guy” from the Simpsons dancing to Daft Punk in his parents basement. He was breaking out some of his best Gaga moves like no one was watching. Yet Disasteradio does make syth-tastic tunes that are nothing if not a call to arms for those punters still not yet in the dancing mood. This was the perfect warm-up for the main act to come.

There was a lengthy lull, soundtracked by some cringe-worthy smooth eighties jazz, before the band everyone was here to see finally appeared. Regurgitator’s Quan Yeomans, Ben Ely and Peter Kostic entered the stage to a hearty roar from the crowd. The three were dressed in hooded, skeleton-bone onesies and were armed with smiles.

Regurgitator have built a solid back catalogue of albums, each with a unique and timely sound, yet still distinctly ‘Gurge-ish. Their appreciation of popular culture has sent their distinctively late-nineties, hip-hop influenced sound through the ironic-pop blender, which has spat out some truly exceptional alternative pop. Each song was supported by colorful animations projected behind band, both low-tech and geeky, which kinda sums up Regurgitator up.

The set was punctuated by older material off of their first and second albums, with ‘I Sucked a Lot of Cock to Get Where I Am’ inducing an enthusiastic reaction from the crowd. With such a back-catalogue of popular singles, it would have been difficult to disappoint, yet the best reception was for tunes such as “Black Bugs” and “Polyester Girl” off of the 1997 album Unit. Despite revisiting the “classics,” there was a still healthy serving of new material off of SuperHappyFunTimesFriends, including the new single “One Day”. Disappointingly, the bands fantastic first ever single ‘Blubber Boy’ was slightly spoiled when they passed the mic to an audience member and had him up on stage for some impromptu karaoke. The poor guy looked a bit uncomfortable about half way through, but Yeomans wasn’t letting him off the hook that easily.

Regurgitator finished up their set with “! the Song Formally Known As”, which caused every able bodied member of the audience to po-go simultaneously into the air. The lads broke it down and danced all over it. Ending the night on this high note, the band graciously left the stage, thanking their audience. Despite being not in the best shape for a night of compulsive dancing, it was such a satisfyingly silly, fun and nostalgic gig that it was impossible not to have a good time.