Perth surfie punk-rock trio Pretty Uglys have been generating lots of hype lately, fueled by popular new single “Your Shade” prompting a strong turnout to their Saturday night show in their hometown.

Add to that a youthful, yearning and intoxicated Jack Rabbit Slim’s crowd, stirred up by support acts Spici Water, Flower Fiction and Ra Ra Viper (the latter who produced an invigorating Arctic Monkeys cover), and you had the recipe for a wild show.

Accompanied by Benny Benassi‘s “Satisfaction”, the three-piece waltzed out on to stage with some swag, bursting into “Emergency Room” from March EP Party Friends which immediately led to a mosh pit from the riled-up audience and a crowd surfer for their second song.

It was clear the band members had hydrated well to settle their nerves pre-show as they attempted some banter between songs; Rusty-shirt wearing bassist Jean-Luc Mason goofily conceding he was out of key the entire first song, while drummer Jack Mitchell declared it was a night for everyone to rip their shirts off which, to be fair, in his case wasn’t unreasonable ahead of a non-stop sweaty shift on the skins.

Keeping things on track was down to vocalist Jaxon Alp who appeared the most sober, in his laidback surfer manner, between belting out another crowd-pleaser “Dreamland Delusion”. 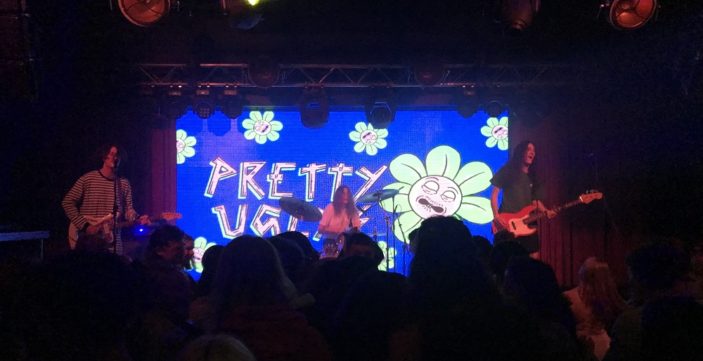 The crowd’s brash energy threatened to spill over as a circle pit formed which Alp did an admirable job in containing, disarmingly remarking that “someone might hurt my mum and dad” who he’d tenderly previously noted were making a rare appearance at one of their gigs.

But the band’s energy, with hair flying around everywhere and Mason bouncing around the stage at every opportunity, translates infectiously to the audience.

With a short back catalogue, Pretty Uglys threw in a cover of The Cure‘s “Boys Don’t Cry”, although Alp may not have known all the words, but the chorus worked well enough.

New single “Your Shade” created delirium, meaning there was no let-up in energy, summed up perfectly when a crowd-member jumped on stage and put Alp on his shoulders. It wasn’t easy but he just kept playing.

For energy, the trio didn’t relent nor did the crowd. There are a few goofy kinks to iron out in their performance but there’s a lot to like about Pretty Uglys.

And the best thing is listening to their surfer-punk rock naturally makes you want to move but watching them live, with their youthful exuberance, you might just go a little mental with excitement. And that’s a good refreshing thing.

Keep an eye out for the Uglys.