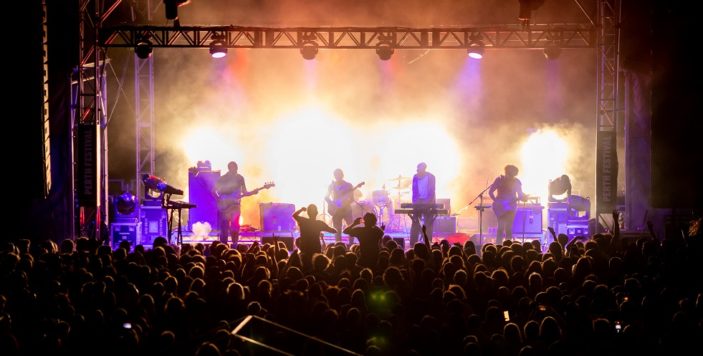 WA-based psychedelic rockers Pond opened the Perth Festival at the wondrous Fremantle Arts Centre on Friday night in front of a gig-starved audience on a glorious late summer’s evening.

Pond are much more than a Kmart version of Tame Impala and they showcased that to their tune-thirsty audience, with a fun and groovy display that includes heavy bass lines, brooding synths and funky dance moves.

Frontman Nick Allbrook gives his all to his live shows and Friday’s gig offered no let-up, with a strong presence despite his slight frame, twirling the mic cord around himself, and regularly dancing by pointing both arms into the sky as to say, ‘look at me’. He even pulled out a flute at one point.

Allbrook capitalised on the Arts Centre’s excellent lighting to good effect too, silhouetting his unique dance moves, helping to get the crowd’s hips swaying as he beckoned.

The rest of the five-piece regularly were found lost in their music, which is part of Pond’s charm, if you know their music. On the flipside, this is a band that can feel a bit inaccessible, but they dished up the grooves to avoid any of that for the uninitiated simply yearning for a live show in the isolated state.

There was a tinge of pop with Benny Benassi‘s “Satisfaction” drafted in, while popular hit “Paint Me Silver” had the girls emerging on shoulders.

Allbrook remarked it’s the first time Pond had “played live for ages” but there was no semblance of rust, nor did they falter for an outdoor audience of around 1,500, which seemed to split from devotees – many adorned with Pond tees – upfront (whom Allbrook said could “baste yourself like a pigeon in the oven”) to casual onlookers enjoying the ambience from the grassy banks of afar.

Pond opened with the bouncy track “America’s Cup” from last year’s album 9, which is about how Fremantle – which offered the backdrop behind the Arts Centre stage – used to be prior to Alan Bond’s 1983 yachting success.

The heavy bass in “Sweep Me Off My Feet” was a highlight best enjoyed live, along with “Toast” where Allbrook references Broome’s Cable Beach adding to the local feel.

Pond finished arguably a tad too slow, playing epic builder “Edge of the World” for their final song in their encore but that’s a minor gripe when few would have left disappointed.