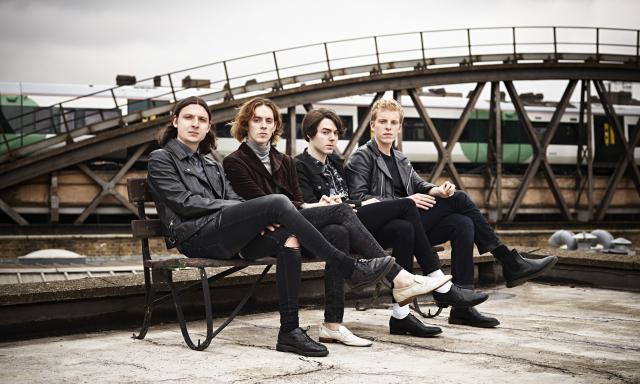 As soon as Peace took to the stage in Sydney’s underground Oxford Art Factory, the space took off with an intensity of sound that made it seem like an outdoor festival. I saw Peace play the same venue two years ago and their confidence levels are now even higher, it felt like a seasoned rock band was performing, instead of a new indie collective.

Singer Harry Koisser swayed around in a kimono over a t-shirt, guitarist Doug Castle bent down and played his guitar to the crowd. Peace played their two-album’s worth of songs with extra energy and elongated instrumental breaks. I moved around three times during the night and heard English accents all around, I think the boys had a lot of home supporters present but alongside plenty of young Aussies keen to see some music on Friday night played not from a DJ deck, but from real live instruments.

“Oh it’s Friday, on Friday I do my thing!” Harry kept his comic composure going throughout the gig but didn’t speak too much. Besides, anything he said elicited screams (female and male) from the audience. Peace have truly garnered a reputation as an exciting live act. Back to back performances of old and new tracks got the crowd excited, especially “Lovesick” into “I’m A Girl.” Their sophomore album Happy People was only released a few months ago, but the fans are all over it and even the bartenders were clapping along by the end.

Despite the festival-like energy they created in volume and pace, Peace were just as capable to slow down their set and indulge in some of their more sentimental tracks. “Perfect Skin” is one of my favourites off Happy People and probably one of the most vulnerable in terms of lyrics alongside “I’m A Girl”, which we also heard. Staring down at their instruments in utter focus like young musos in a bedroom rehearsal, the band almost lent a frenetic frustration to the lyrics, “And if I had perfect skin/ Would I feel pure within?”

The crowd was clapping of their own accord throughout and singing along just like at their last Sydney show. Dominic played an epic drum solo when introduced to the crowd and the rest of the band joined in afterwards with pedal-heavy jam. And of course they came back on for an encore performance, In Love’s “Float Forever” into Happy People’s “World Pleasure.” “We would come back in three weeks if we could!” Harry announced as finished up their encore, leaving the audience very satisfied.