The final day of Party In The Paddock was a special one, not only were there many amazing international artists to grace Tasmania for the first time, but the inclusion of a magical moment within Yungblud’s set made this year’s Party In The Paddock something the attendees will not soon forget. This, coupled with the annual parade through the festival grounds had the final day putting everything together in a wonderful mix for 2019.

The weather put a bit of a dampener on day three, with many people not turning out to some of the early morning activities to avoid the weather and to help recover from the revelry of the evening before. With long coffee lines and food lines the festival goers were welcomed back to the final day with a Melbourne act, Empire Park to distract them from a laborious wait. The indie rock outfit blended seeming elements of Gang of Youths using quick fire riffs and heartfelt lyrics to make a statement.

While day two of the festival featured wholesome lyrics and a more heartfelt look at an artist, day three looked at a different side; the power, punch and volatility of sound, using energetic artist such as local Tasmanians The Saxons, rocker’s A Swayze and the Ghosts as well as Punk rock juggernaut DZ Deathrays to help make sure the ground was packed flat by a voracious mosh pit that the slick mud thrown up from an errant thunderstorm couldn’t stop. 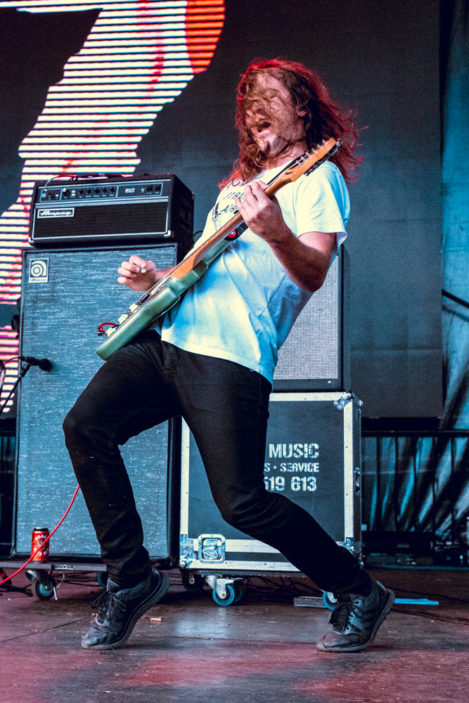 Sadly, the storm did claim a casualty, as heavy rain buffeted the stage it damaged the equipment of Alice Ivy, thus she couldn’t come on for the performance to the dismay of a waiting crowd.

The slowing of the rain coincided with the beginning of the VibesTown March, a feel good dress up parade through the entire length of the festival grounds. The congregation started at the Feel Good Church and danced, sang and cheered their way throughout the paddock, it was an important moment throughout Party In The Paddock and helped bring the mood back in after the rain dampened the atmosphere.

From the perspective of a punter many must have thought that the energy coming from The Jungle Giants mega set the night before was some of the peak power output through the festival, but nothing could have prepared the Party In The Paddock faithful for what Yungblud was going to bring during his act, quickly becoming one of the most exciting acts some would have seen. The popular UK artist was incredible with his boundless enthusiasm rubbing off on the mass of his fans in the crowd.

“I Love You, Will You Marry Me” was the highlight of Yungblud’s set, as halfway through the song, two of his longtime fans were bought out onto the stage to share an important moment with Yungblud and the festival. Something potentially seen at festivals, a beautiful same-sex marriage proposal became the headline of the weekend before the continuation of Yungblud’s set. His set was full of fan favourites with a near seven thousand strong mass of people writhing in the pit dancing to songs such as “Anarchist”, “California” and his latest single release “Loner”.

The Paddock stage was soon set alight with the tender folk/pop of Vera Blue, the Sydney artist was a perfect lead in to Lily Allen with a writing style with high emotion, yet the gravitas to deliver an exciting and tender live performance. The recently released single “Like I Remember You” was a feature against many of Vera’s other staple hits, “All The Pretty Girls” and “Lady Powers”.

Lily Allen was the major player on the main stage for the final day and a phenomenal act based on her years touring and recording around the world. Her first visit to Tasmania seemed a positive one, even though there was a minor delay during her set due to a technical difficulty. Lily’s incredible talents as a musician were on display as Lily’s set performed the evolution of her artistry. With a stronger focus on her 2018 album, No Shame. Lily’s newest track “Roll The Dice” while older classics, “Somewhere Only We Know”, “Smile” and “Fuck You” stirred up the crowd.

Party In The Paddock 2019 was a sensational time for all the attendees with food, activities and music for everyone as the Tasmanian festival sadly had to come to a close for another year.

Party In The Paddock is an annual festival held in White Hills, Tasmania over early February.