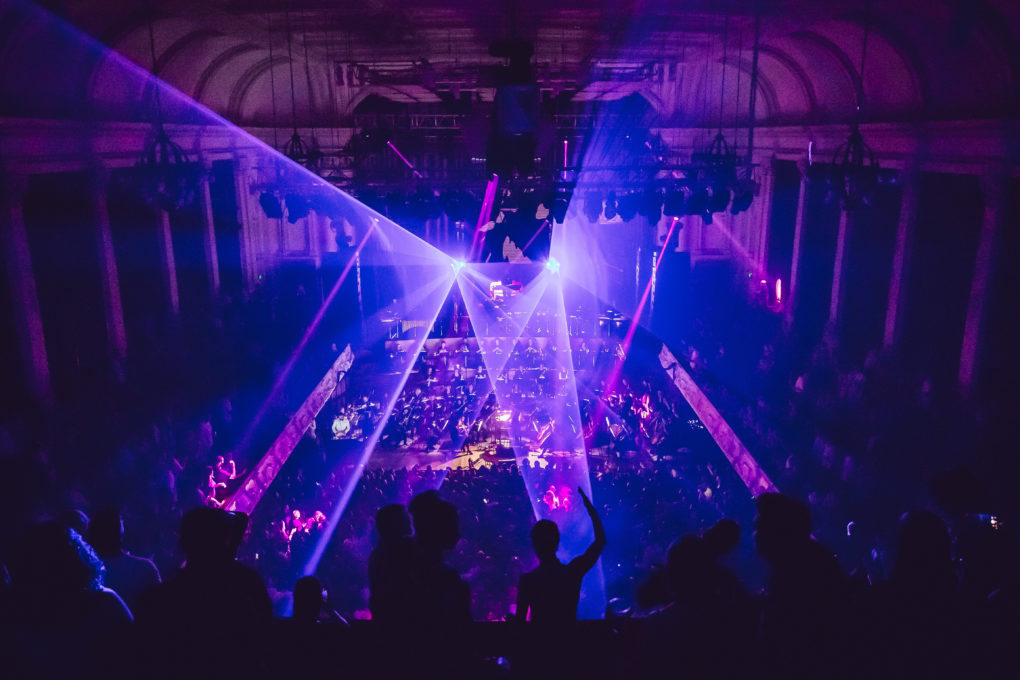 Synthony is a pretty unique concept. Bringing together local orchestras, DJs, vocalists, feature musicians, and a crowd hungry for dance music, Synthony presents some of the biggest tracks of the last thirty years, live on stage, in an energetic and exciting event. Since kicking off a couple of years ago in Auckland, Saturday night was the first time the show had set foot on Australian soil, and, if the audience response was anything to go by, it certainly won’t be the last.

It’s a curious blend for the uninitiated, not least because the historic surrounds of the beautiful Brisbane City Hall seem much more suitable for the Brisbane Philharmonic Orchestra than the rest of the gang, but as the doors open and we’re treated to a DJ set from Phil Smart, it all starts to fall into place. The venue is packed, and the dancing starts almost immediately, and by the time Mobin Master introduces the Brisbane Philharmonic, led by conductor Peter Thomas, to the stage, the audience is ready for something spectacular. And, boy, do they deliver.

The setlist for the night is a closely guarded secret, guaranteeing a fresh show for every new audience. On the Brisbane stage, tracks from the likes of Corona (complete with “Rhythm of the Night” singer Jenny B on vocals), The Potbelleez (featuring singer Ilan Kidron), and the mighty Faithless had everyone, from the dancefloor to the seated mezzanine, on their feet. Highlights also included a cover of Darude’s timeless Sandstorm, and a suprisingly emotional tribute to Avicii, with a rendition of Levels.

Complementing the outstanding arrangements is a killer light show, an exciting touch that puts the crowd firmly in the club, despite what the grand location might suggest. Indeed, the party atmosphere is so infectious that, as the Brisbane Philharmonic exit the stage, no one is ready to go home. Thankfully there’s one more trick up Synthony’s sleeve – a closing DJ set from house music legend Ron Carroll, giving the audience time to bust out a few more moves before returning, ears ringing and heart pumping, to the real world.

Synthony is an unforgettable night out, a wonderful blend of genre and performance that had everyone in the room having the time of their lives. With such an exciting Australian launch under their belts, we’ll likely be seeing the Synthony team on a few more local stages in the coming years – I’ll see you all in the ticket line!

Synthony will return to New Zealand for a series of shows in September/October. Catch them on the following dates:

Header image supplied by PR team and features a 2018 event.