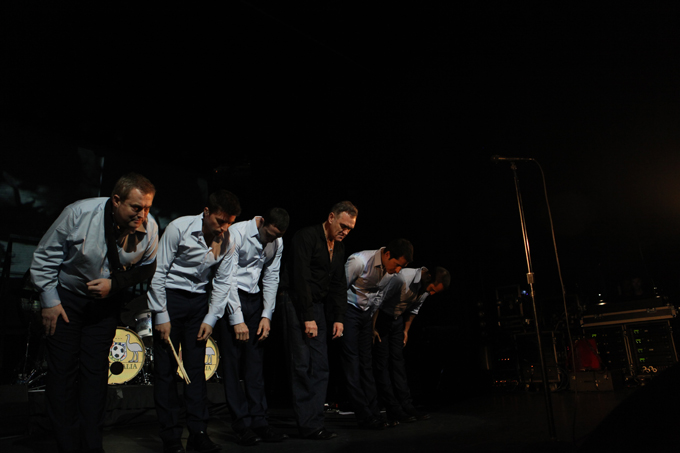 Morrissey is an artist whose music has always existed in the periphery of my mind. I wasn’t brought up on The Smiths; rather discovered their music in my late teens. His solo music, meanwhile, was something I knew from song to song, rather than album to album. This wasn’t so much indicative of any particular lack of desire to take a plunge into his back catalogue; rather, it just never came up. So in saying this I come to you as a fan of the man himself, and certainly of his legacy, but reasonably unfamiliar with the vast majority of his discography. You can run to the end of this review to hear some thoughts from someone who is much more familiar with the man than myself, but this did little from keeping me from his performance on Friday night in Sydney – his first in a decade – one which will easily rank as a highlight of the year.

Morrissey hadn’t even taken the stage before it was clear that an impressive light show would accompany his music. A spoken word piece rung out over the speakers as the lights started to flex their muscles, until Morrissey walked onto the stage with his band to a massive roar from the crowd, bowing politely and jumping straight into the usual opener, The Smiths’ “Shoplifters of the World Unite”, which brought on a great singalong from the crowd.

The rest of the set saw Morrissey move around the stage like a well tuned master of ceremonies, whipping his mic cord around and routinely moving from one song to the next; plenty of hits and plenty of “I can’t believe he’s playing this song!” moments from the surrounding crowd. He engaged well with his audience, held plenty of hands in the front row and at the end of the set, he received plenty of gifts and enjoyed the typical stage invasions which saw one girl get a hug before being shoved back into the crowd by his security, and a man get on his knees in a “I am not worthy” gesture, which even saw Morrissey crack a laugh during the set closer “First Of The Gang To Die”.

Being the night that the world was ending and all, “Everyday is like Sunday” was particularly poetic with its lyrics about the apocalypse, and introduced us to Morrissey: the theatrical performer, wiping his “sweat away” from his face during the corresponding lyrics. Later in the night he would remove his shirt at a lyric about “seeing things you despise”. A performer, a poet… Morrissey ticked many boxes through his set. My personal highlights of the night were “Ouija Board, Ouija Board”, with great energy and use of their huge gong at the end of the song, as well as “How Soon Is Now”, with spectacular drumming at the end, seeing Morrissey collapse to the floor, letting the energy of the performance wash over him.

The infamous ‘Meet Your Meat’ film was displayed during the Smiths track “Meat is Murder” which certainly serves as an interesting interlude to the set; the track ended with a cacophony of instrumental mayhem as animal slaughter was on display. I daresay I had to turn away from the screen more than once.

I couldn’t pen this review without providing a particular mention to the legendary Boz Boorer, who is taking part on this tour in spite of a broken arm – not only playing the guitar as though nothing was wrong (with the help of a stand for the guitar), but the clarinet too. Morrissey reportedly told his audience in Wellington last week that Boz “fell off a roof… as you do.” On ‘ya Boz!

Seven Smiths tracks were distributed throughout the night, as well as a Frankie Valli cover (“To Give (The Reason I Live)”), and as for his own material, it was a surprisingly even cross section of his entire back catalogue. I left the gig quite surprised I knew the majority of tracks on display. Indeed, even I muttered at the odd occasion “I can’t believe he’s playing this!”.

Not knowing what to expect from the legend, I witnessed a truly crowd pleasing set, with plenty of highlights, incredible energy from the crowd and all in all it’s not a night I’ll forget anytime soon. As my final gig for 2012, I couldn’t have picked a better way to end it. An easy highlight of the year.

Here’s hoping it doesn’t take him another decade to return.

Morrissey completes his Australian/New Zealand tour tonight with his third and final Sydney show, at the Sydney Opera House.

Some additional thoughts of the gig by Peter Dovgan:

In 1986 I was living in London and fortunate at the time to witness Manchurian Indie kings The Smiths live twice! The first gig – 23rd October 1986 at National Ballroon Kilburn – was recorded by the BBC and released in 1988 as the Rank album. The second was their 12th December 1986 gig at Brixton Academy. This concert, put together as a benefit for the Artists Against Apartheid, turned out to be the last time the Smiths were on stage together, bar a few television appearances. 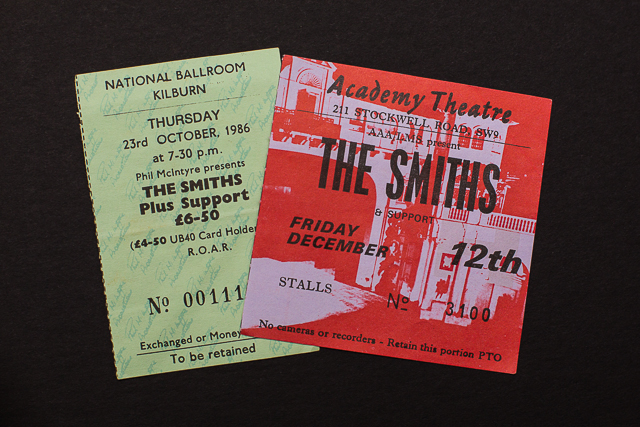 The Brixton gig is one of my all time favourite gigs, the London fans went mad singing along to Indie rock anthems and protest music of its time. I remember in the song “Panic”, Morrissey highlighted the “hang the DJ” lyric by swinging a noose around.

26 years later I find myself at the Enmore Theatre to witness Morrissey solo with band. Thankfully he played at least 7 Smiths songs and the best of his solo work. The highlight for me was “How Soon is Now” – one of the best live songs I have witnessed this year, featuring soaring intense guitars that would have made Johnny Marr proud. Morrissey charmed the crowd through out the gig, feeding the fans with some classic one liners and getting close and personal, reaching out to his screaming fans.

Encore:
First Of The Gang To Die