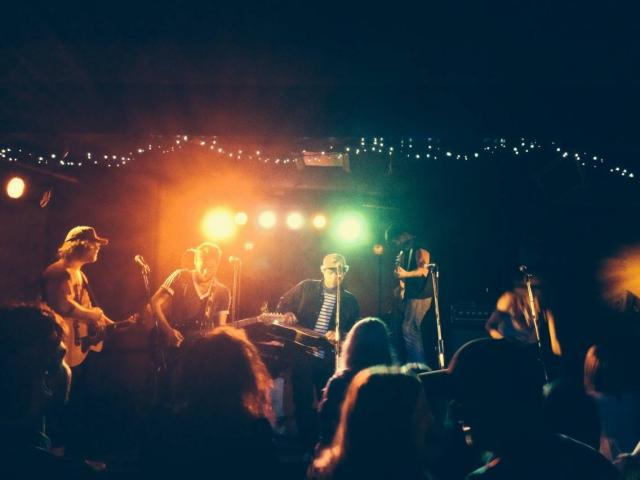 Saturday night saw Fremantle’s Mojos play host to the third and final Little Bastard show of their album launch tour through Western Australia with a large rowdy crowd braving the stormy winter weather for an evening of good times and good music.

Kick-starting it all was, the brilliantly named, Aborted Tortoise. It’s pretty safe to say they weren’t what I was expecting. Not that I really knew what to expect from a band with a name like that, punk or metal perhaps? Either way, it was a fantastic first introduction to the band. A brilliant, upbeat and raucous set – great no frills rock delivered with no small amount of swagger. The crowd certainly enjoyed it too, calling them back for onstage for just one more song.

About 2 songs into their set I remembered just how much I enjoy watching The Floors play. It was business as usual for the three-piece; rumbling through a set dominated with some quality Blues-tinged rock. The only down-side of the set was a few moments of drink-fuelled dickheadery from certain members of the crowd – culminating in one of them stumbling on stage for no reason it seemed to get a closer look at the drummer. Aside from that it was a great set, with fantastic performances from all three.

In some ways Aborted Tortoise and The Floors seem like unusual choices of supports for Little Bastard, a band that boasts a fiddle, mandolin and banjo amongst their instrument haul. But then Little Bastard isn’t your standard folk/bluegrass band. Mumford & Sons they are definitely not.

They are, however, undeniably entertaining live. With more than half the band casually switching between instruments and sharing vocal duties – all whilst inciting whole groups of people to “hoedown” badly. I think I can safely say that Saturday’s gig was one of the most fun I’ve been to in a while, and Little Bastard have quickly become one of my favourite bands in the country right now.

There is something wonderfully irreverent about the band. They don’t take themselves too seriously (nearly to the point of underselling themselves) and they certainly seem to enjoy their time on stage. Yet they are also undeniably accomplished musicians, with some quality playing on show from all members of the band.

Unsurprisingly given the nature of the tour, the set was dominated by songs from the self-titled debut album, though they did manage to slip in a cover of Beatles rarity “The Night Before”. Some of the highlights (there were many) included “Desert Roller”, “High For You” and a particularly raucous rendition of “Just Won’t Do” with the majority of the crowd joining in at the chorus.

Little Bastard are a band perhaps best experienced live. If you happen to find yourself somewhere near one of their launch shows in the coming weeks, go. You will not regret it. I just hope I don’t have to wait too long for a return visit West.