Live Review: Kings of Leon tear it up on Halloween night at Park Sounds 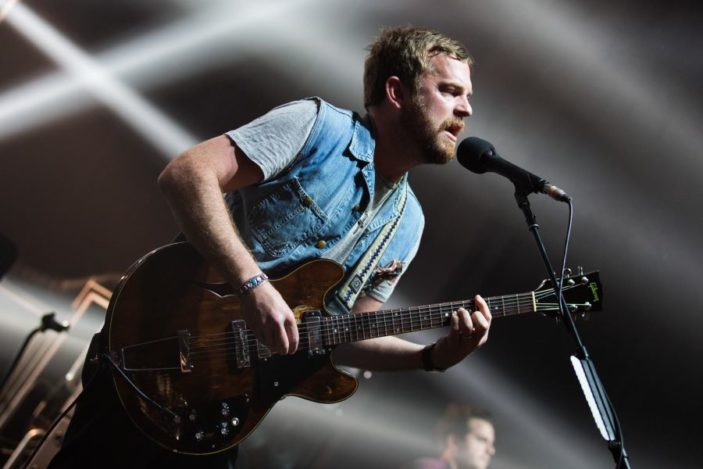 As part of Park Sounds, musicians T. Lopea & the International Men of Mystique played at the Music Box (a pop-up stage near the P1 parking at Olympic Park, closest to Qudos Bank Arena) to add to the atmosphere as patrons started shuffling in for the main event, Kings of Leon supported by The Temper Trap.

There were food trucks peppering the area, including delicious chips on sticks, banh mi, and an ice-cream van with coffees on offer. T. Lopea & the International Men of Mystique were fun and groovy, quirky, and cool, even playing a cover of “Someday” by The Strokes.

Supporting Kings of Leon in the main arena, The Temper Trap, really warmed up the crowd. They were very gracious and revealed that they would soon go back into hiding to record some fresh new music. The Temper Trap then wrapped up a short set with their most well-known song, “Sweet Disposition”, from the album Conditions (2009) which the crowd melted for.

It has been a very long wait for Australian fans to see Kings of Leon in their first full Australian tour in around a decade. In that time, they had released three new albums and made sure to cover each and every one in this full-scale arena show. It kicked off with a cute camera pan across the crowds, members of the crowd were gleefully seeing themselves on the big screens by the stage. This linked in with the new album, released in 2021, When You See Yourself. Of course, as the lights went down, the boys emerged playing the title song, “When You See Yourself, Are You Far Away”.

The boys, including clown-faced frontman Caleb Followill, applied some Halloween make-up to celebrate the evening along with the rest of the band in skeleton-style face paint: Jared, Matthew, and Nathan Followill. Of course, this day of the year is much bigger in the USA (where the boys are from, originally in Tennessee), and the Aussie crowd was happy to oblige.

With eight albums of material, it was exciting to see what kind of setlist would unfold on the night. Happily, there were songs plucked from every album, even all the way back to Youth & Young Manhood which was released in 2003. “Molly’s Chambers” went down a treat and provided a good old fashioned sing-a-long, something that Caleb requested a lot of, throughout the night. There was even a lyric display on the screen for “Milk”, coming from their second-ever album, A-Ha Shake Heartbreak (2005).

It was thrilling to see Kings of Leon cover nearly twenty years of material, reflected in the generations of fans who attended. As seasoned performers, the Followill family was spectacular to witness, and in a sense, you could see their evolution as musicians in the mapping of their music.

Arguably their most successful mainstream album (with a lot of popularity here in Australia), Only by the Night (2008) was obviously going to close the night and got the most buzz from the audience. This included “Use Somebody” played before the encore, and then finally, “Sex on Fire” which appropriately ended the show.

A personal favourite from this album, however, is “Cold Desert” which was such an emotive experience. Although a melancholic song, it connected the fans who held up their phones with torches lit. It is the final track on Only by the Night replacing ‘Trani’ (Youth and Young Manhood) as the epic rollercoaster song of the night (which they used to end their shows, a decade or so ago). Fingers crossed Aussie fans don’t have to wait too long until they return.

Park Sounds continues throughout November 2022 and will have Spotlight artists playing at the Music Box (near Qudos Bank Arena) on the night of major artists including Dua Lipa (8 and 9 November) and Flume (18 November). They play at 6pm, 7pm and then finally, at 10:40pm as everyone walks back to their cars after the big show.

Kings of Leon performed at Qudos Bank Arena in Sydney on 31 October 2022. For further tour dates across Australia, head HERE