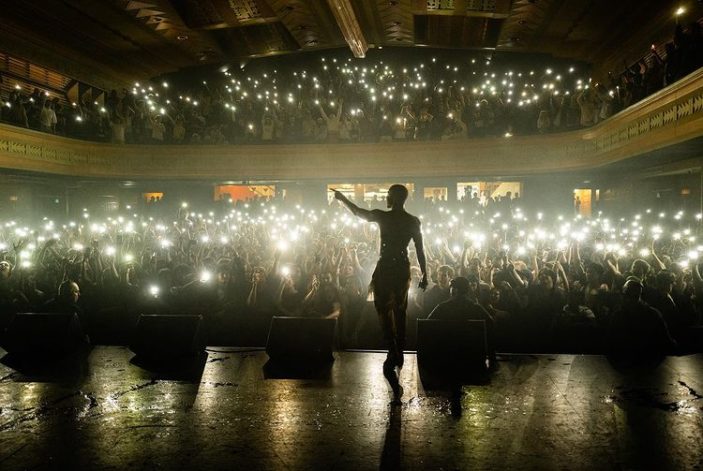 It’s crazy sometimes to see how few people seem to share your interest in your favourite smaller artists, especially when you can’t get over just how brilliant they are. This is exactly how I feel about JPEGMAFIA, a.k.a Peggy. As one of my favourite artists, I can never seem to get enough of his music. So you can guess how excited I was to be inside Enmore Theatre surrounded almost entirely by people who love Peggy as much as myself.

It was one of those nights that you look forward to months in advance, almost endlessly waiting for the day. Then just like that you’ve spent your night feverishly singing along to your favourite songs, except this time the artist – JPEGMAFIA – is just there, in front of you.

For just about everyone it can be assuredly said that this was an unforgettable night. Seeing Peggy absolutely demolish your sonic expectations and turn his most popular songs into whole new experiences is special. His performances will make you go home and play “Thug Tears” but specifically the live version. Peggy is of the breed of talented artists who just sound better live.

The night was opened by Sasha Spielberg, better known by her stage name Buzzy Lee (yes she is Steven Spielberg’s daughter, although she’s very much independent of that label). Accompanied by guitarist Ben Fletcher, she got the crowd going with a smattering of songs, including her most popular “Coolhand” and “Strange Town”. Most attendees probably knew her from her collaborations with Peggy on songs such as “DOTS FREESTYLE REMIX” and the Peggy produced, Denzel Curry song “John Wayne”. Even Buzzy Lee was excited along with everyone to see Peggy hit the stage, with just the mention of his name exciting the crowd into enthused chants.

Of course you can guess that when the lights went down and JPEGMAFIA cooly strolled out onto stage, the reaction from the crowd was deafening. Trust Peggy to go from calmly introducing himself as “JPEG motherf*****g MAFIA” straight into a scarily intense rendition of “Jesus Forgive Me, I Am A Thot”. There was no stopping him from then on out. Every song was met with a hyped reaction. Every song. Not a moment went by without Peggy tearing it up or the crowd chanting for the next song.

I was fearful that the floor would collapse just like at Genesis Owusu’s concert earlier this year in March. It only took Peggy till “BALD!”, the third song of the night before he had to remove his hoodie and jacket to deal with the sweat he was creating.

And as if Peggy’s most recent album LP! wasn’t threatening enough to the meek critics and ingenuine musicians Peggy managed to turn it up a notch. With the double middle-finger gloating of “NEMO!” and the threats of “REBOUND!”, Peggy got the crowd hyper. He pulled out a couple of favourites from his 2018 album Veteran and of course no one was caught off guard. “Baby I’m Bleeding” and “Real Nega” will always be amongst his best, most popular songs. Even deeper cuts like “Puff Daddy” and his feature on Flume‘s “How to Build a Relationship” had everyone chanting.

This night was a lesson in crowd control and hype, on-stage charisma and pure bangers. No guest artists – except for a fan invited up to sing “Free The Frail” – or fancy tricks. Raw and unfiltered, Peggy, sorry, JPEG motherf*****g MAFIA, brought it all and left it all out there on the stage. He even performed the forever famous, at least to his fans, auto-tune acapella version of Carly Rae Jepsen‘s “Call Me Maybe”. It’s exactly what everyone wanted to experience and never wanted to end.

JPEGMAFIA moves next to Auckland on 26 July 2022, then the U.S. then onto Europe. More info here.