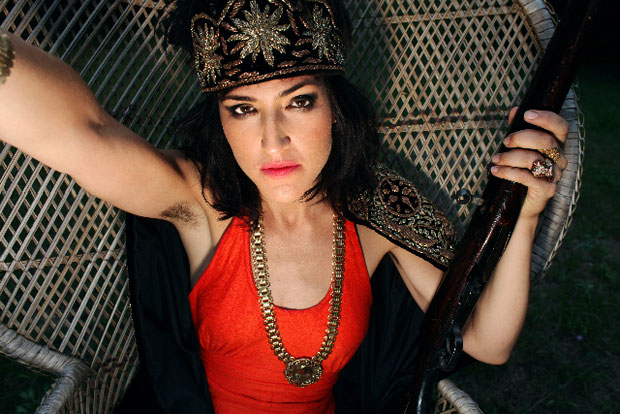 It’s always interesting when you get to see a performer for a second or third time. Tonight was my second chance to spend the evening in the company of Joan As Police Woman, the first having been on her last Australian tour: a gig that was standing room only at Jive, while she was touring her rather low key album, Real Life, with a suitably mellow set. As I walked into The Governor Hindmarsh and saw its cosy cabaret style set up of scattered tables, burning candles and open fire burning I didn’t yet know that tonight’s gig would prove to be quite different from the last.

The support act was Leeroy Lee, whose Nick Drake-ish folk sensibilities are charming and whose talent is evident. He incorporates a live sampler, banjo and harmonica into his set which is entertaining, albeit very slow. He plays a reasonably lengthy set for a support, of around forty minutes, yet the crowd seem content to listen to more of Lee’s honey-voiced folky numbers.

There is a short break before Joan Wasser takes unceremoniously to the stage. Wasser, who operates under the banner of Joan as Police Woman, released her fourth album The Deep Field earlier this year. She is joined on stage by bandmates Tyler Woods on keys and Parker Kindred on drums. Kindred has worked with Wasser on previous projects, as well as working with other artists close to Wasser’s heart such as Jeff Buckley, and Antony and the Johnsons.

Kindred’s drums kick in for the first number “Action Man”, and gets the set off to a flying start. The band then slip straight in to a lively rendition of the first single from the new album, “The Magic”, a fun song, and one of the most pop-sounding songs in Wasser’s repertoire.

It is mentioned that the show is being taped by the ABC tonight, which entices the crowd to show their appreciation a little more vocally. Wasser is a dynamic performer, and in between songs she offers us plenty of genuine laughter and casual, relaxed remarks. She takes a moment to draw the audiences attention to her flared, 70’s-style pants suit, with rainbow fluorescent trim, telling us it cost her just twenty-five dollars. She somewhat awkwardly recounts her lunch-time adventures, where she had “the best ramen” she has ever tasted in a food court in Rundle Mall, as she busily tunes her guitar. Her infectious, unassuming laughter trails off and we are in to the next song; this is a smouldering performance of “Chemmie”, another number off the new album. There are few songs sexier than this. It is the ‘Fever’ for a new generation.

One thing that sets Joan Wasser apart from many female singers who emerge from a soul legacy is not only her voice but also her immense talent both as a multi-instrumentalist and a songwriter, switching between guitar and keyboard, all played while she sings with that breath-stopping, powerful, growling voice. Witnessing the intensity of the performance of songs such as “Run for Love” which came to a close in a cacophony of howling vocals, cascading piano, and shrill organ, was incredible.

Watching Joan Wasser perform, you realise there are two clear different dimensions to her musical persona; there is the soft side, the sultry, soulful Joan and then there is this turbulent, aggressive and forceful element that bursts out at any given moment. Wasser has the ability to move from siren to seductress in the same song, and on stage she even has two microphones that enable her to shift from dulcet to distorted seamlessly, just for those Jekyll and Hyde moments.
The majority of the night’s set is taken from The Deep Field, and yet there was still great variation between the mood of each number played, which makes for an up-beat and energetic set. There is not a dull moment. The set finished with the recent single, “Nervous” which is incredible and almost psychedelic performed live. The band then follow this up with “Say Yes” which surprisingly, was relegated to being a bonus track on the latest album. This is a true rock number and a treat for the fans.

Wasser and her band leave the stage on this high note, but they do not torture the eager fans for long, Wasser returning after only a minute or so. Alone at the keyboard, she performs a chillingly beautiful rendition of “The Human Condition”. This is a quietly tender and sweet performance and suddenly I am aware of how cold it is and I wonder if the song is actually giving me shivers. Kindred and Woods return to the stage to accompany Wasser for the final number “Real Life”, the title track from Joan as Polices Woman’s first album; an exquisite finish to an amazing and dynamic set. The room stands to applaud Joan as Police Woman as the band form a line to take their final bows and Joan Wasser thanks the crowd before sidling off the stage. The night ends and the fire that had been burning is now nothing more than a low, smoldering glow. We blow out the candle on our table, and leave into the chill evening air with the feeling that we were of the privileged few lucky enough to have witnessed tonight’s truly outstanding performance.