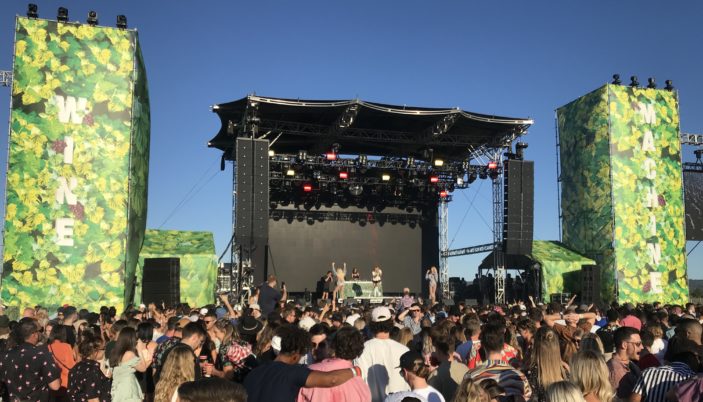 He may have admitted nerves and rustiness in the lead-up to his first live event in more than six months, but DJ Tom Loud, aka Hot Dub Time Machine has still got it when it comes to get a crowd energized.

Hot Dub was billed as the main attraction at Saturday’s sold-out Wine Machine festival in Perth’s Swan Valley wine region and he rightly stole the show in the evening with an exceptional set full of classics and surprises to cap a glorious sun-bathed day.

There was a barely a cloud in the sky as the temperature reached 27C in Perth’s east. But, that didn’t deter the punters who flocked to watch popular emerging local act Spacey Jane’s early set.

The Fremantle foursome warmed the crowd up into an excited frenzy with their garage pop. Their set finished off nicely with hot single “Good For You”, as hordes flocked into the venue on the late buses. There’s something special about these kids and despite their early billing, the crowd knew it.

The festival’s generous and vast setting at a vineyard meant there was a relaxed pre-summer feel among the crowd; so holding the centre stage didn’t always guarantee people’s eyes. But, Melbourne’s Owl Eyes delivered a tidy show, supported by two sparkling drag queens, who did their best to steal the attention from the blonde singer.

Owl Eyes is best known for the vocals in Flight Facilities’ “Heart Attack” which she performed with grace, much to the crowd’s appreciation, while she also oozed cool and restrained energy with underrated track “You And I”.

Brisbane teenager Young Franco’s DJ set kept the good vibes rolling. Although it wasn’t until he played some of his own tunes, namely unleashing 2017 single “About This Thing”, that the audience began to bounce.

As the afternoon lengthened, the largely younger crowd were beginning to loosen up around the Oakover Grounds, which included a well-placed DJ beside the lengthy toilet queues. Though it wasn’t until much later in the evening that the centrally located lake took its first victim, with a man opting to jump into drink as a retreat from chasing security guards.

WA’s quarantine rules meant Bag Raiders were restricted to a DJ set as the sun went down, this again peaked with their originals: decade-old “Starlight” and YouTube sensation “Shooting Stars”. 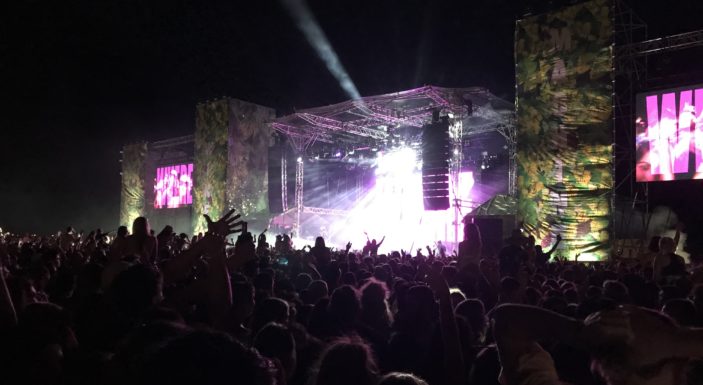 Hot Dub Time Machine stepped on with the main stage packed to its fullest all day, with an air of expectation and he didn’t disappoint. DJ Tom Loud has a wealth of musical knowledge but he’s also the master of timing and delivery, executed to perfection throughout his 90-minute set, albeit with premeditation.

The highlights included an unexpected run of Bill Withers’ “Lovely Day”, though Fleetwood Mac’s “Dreams” arguably was greeted by the biggest roar, as Owl Eyes made another cameo on stage to deliver Stevie Nicks’ high notes.

Sixpence None The Richer’s “Kiss Me”, made famous in the 90s by Dawson’s Creek, also got a popular run, showing Hot Dub’s diversity and ability to hold the crowd in the palm of his hand.

Once the main act finished, hordes starting heading for the exit to claim their place on one of the many buses for the 45-minute drive back into Perth, but Soulsby greeted those who stuck around with a trendy set of contemporary pop.

All in all, Hot Dub stole the show as expected and clearly he’s still got it despite his lengthy layover between sets, while everything else was a bonus, including the fine weather, with early starters Spacey Jane reminding all of their bright future.

Wine Machine took place in the Swan Valley, Perth on Saturday October 17th. Hot Dub Time Machine will hit the road again in 2021 for the Together Tour. Tickets can be found HERE.

All photos by Ben Somerford.