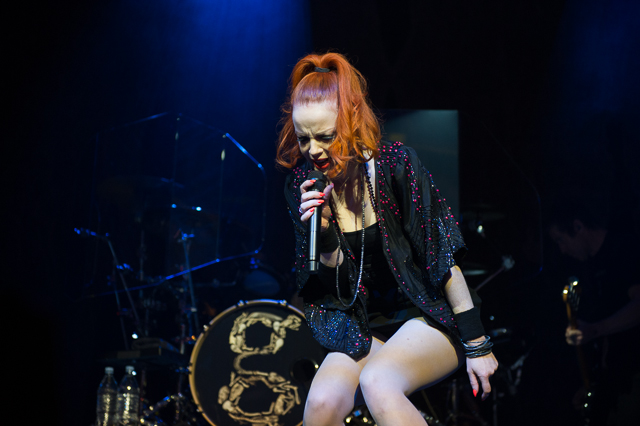 I never expected to have the privilege of seeing Garbage live. They were already on hiatus by the time my teenage self found her way to their section in the record store, so the idea of attending a show was only ever a daydream. Skip forward seven years to when it all changed. 2012 brought a new record, a new tour, and a new hope that I might one day be a part of their audience. But none of that was enough to prepare me for the spectacular experience that was finally seeing one of my favourite artists.

Most bands who have at least two albums will follow the standard setlist template — song one will be the most successful track from their latest release, and song two will be a reasonably popular track from their earlier work. Yet Garbage chose to ignore this trend. Instead, the first two songs of the setlist were “Push It” and “Queer”; two stand-outs from their second and first albums, respectively. Yes, both songs are favourites of mine, but it’s the minor details like this that reveal the level of experience and confidence they have: the band are aware their fan base know the songs well enough to be immediately hooked, so they’re perfectly comfortable playing around with the traditional set structure.

Of course, there are also more blatant indicators of their experience — like the music itself. The majority of the show comprised of the band’s hits, occasionally redone with a new twist. “Only Happy When It Rains” was stripped back and slowed down for the first verse and chorus, only to burst into its original frenzy at the second verse. Even “Vow”, the band’s debut single, was altered; transitioning into a partial cover of M.I.A.’s “Bad Girls” near the end.

As for the new songs: some have criticised the band’s most recent record (Not Your Kind Of People) for not being as strong as their earlier work, and before the show, I would have agreed. But after seeing a decent chunk of the tracks brought to life, I can honestly say that some of them will be favourites of mine. The studio recordings of “Blood For Poppies”, “Automatic Systematic Habit”, and “Man On A Wire” do not capture the songs’ blistering potential.

The band had a passionate, almost violent presence, as overwhelming as it was euphoric. Shirley Manson was at her best: prowling, twirling, skipping, kicking, falling to the floor, and using her microphone more like a weapon than an instrument. It was a sight: one minute she was stalking up to Steve on guitar, belting out the words to “Control”, and the next the song was over, and we’d glimpse the cheeky grin that passed between them in the second before the lights went down. This balance between the theatrical and the playful was invaluable, with the audience enjoying every moment.

It’s usually considered a risk for a band to take such a long break from recording and touring — their fan base could find new favourites, or the band could lose interest in the music, or they might just make the break permanent. If anything, Garbage’s impeccable two hour set is a response to that silent challenge: could they come back after so long and be even better than you ever expected? The answer is yes. In Shirley’s own words, ‘I kid you fucking not.’

Photo Credit to Johnny Au.
View the rest of the gallery here: https://www.theaureview.com/photos/garbage-the-star-event-centre-06-03-13