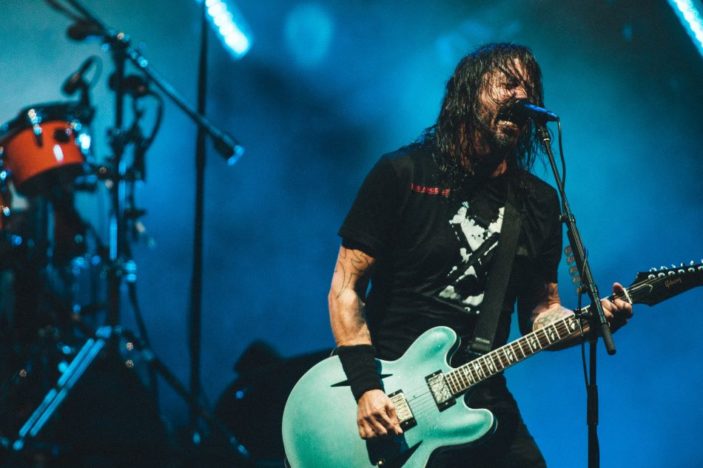 It felt like a long time coming, the Foo Fighters released both their Bee Gees inspired album, Hail Satin under the name DeeGees and released their most recent Grammy-nominated record, Medicine At Midnight. Yet, every time it felt like we may see the glimpse of an announcement that the Foo Fighters would come to tour Australia, the worst would happen. Borders would close, we’d go into lockdown and the cycle would repeat. It was something that Dave Grohl himself lamented last night at GMHBA stadium, as the world felt a little more normal as both Dave and the Foo Fighters returned to Australian soil for a one-off performance on the back of Michael Gudinski’s last big project, ‘Always Live’.

It was always going to be a big show, with the Foo Fighters feeling like the first big international act to hit our borders. They pulled out all of the stops through a two-and-a-half-hour set topped off by fireworks, but the openers really set the stage for a stellar concert, with The Meanies & Amyl & the Sniffers putting the energy into a growing crowd over the first two hours. While both of the bands put on incredible performances in front of a growing crowd, it was clear that most early arrivers were jittering with anticipation to see the Foo Fighters, even the rain which was pouring toward the end couldn’t turn the temperature down.

In near almost classic fashion, Dave came on stage to open with “Times Like These” a staple of the Foo Fighters setlists, Dave opened alone singing the opening lyrics hauntingly alongside the crowd before the rest of the band, Chris Shiflett, Nate Mendel, Taylor Hawkins, Pat Smear and Rami Jaffee brought the metaphorical roof down through the chorus.

This set the mood for the set, high energy & high crowd participation with most punters singing along to every song, even if they didn’t know the lyrics. “The Pretender” followed, before Foo Fighter essentials “Learn To Fly”, “Breakout” (sung for the older fans according to Dave), “My Hero” and “These Days” all featured. During a break, Dave Grohl pulled Taylor Hawkins, the band’s heroic drummer out from behind the kit and took his spot to allow Taylor the honour of singing “Somebody to Love” by Queen. The track and its involved drum solo from Dave really put a stamp on the concert and solidified Taylor as the band’s secondary vocalist.

It was joined in the covers by Dave pulling out the band’s DeeGees side project in singing “You Should Be Dancing”. For those who didn’t know about the project, it was most likely going to be a surprise, but it was a great break from their songs and displayed the range of what both Dave Grohl and the band can produce.

“Big Me”, a track that wasn’t on the band’s setlist made a special appearance with Dave dedicating the track to Australia; the band’s, “home away from home”. Calling it the “first love song I ever wrote”, it was sung with a particular nostalgia that the crowd absolutely loved. This was quickly followed by big numbers, “All My Life”, “Best of You” and “Monkey Wrench”, but it was the final song of the night that really felt like music was back.

It felt like music was alive once again in Australia as 30,000 people came from across the country to see the performance. It’s a surreal feeling after everything that has happened, to see that many people coming together with purpose to sing ‘”Everlong”, the final track of the evening. It was dedicated by Dave Grohl and the rest of the band to Michael Gudinski, as a final goodbye from the group, which was especially poignant as his image was displayed on the face of the bass drum all night.

It was a beautiful moment that both fans and band alike wanted to last longer, but alas, the night had to come to an end, but it didn’t finish without a final bang having fireworks over the first major performance at the stadium to see the night out.

While it was only a one-night performance in Australia, Dave and the band promised they’ll be back later this year for what is guaranteed to be another five-star performance.