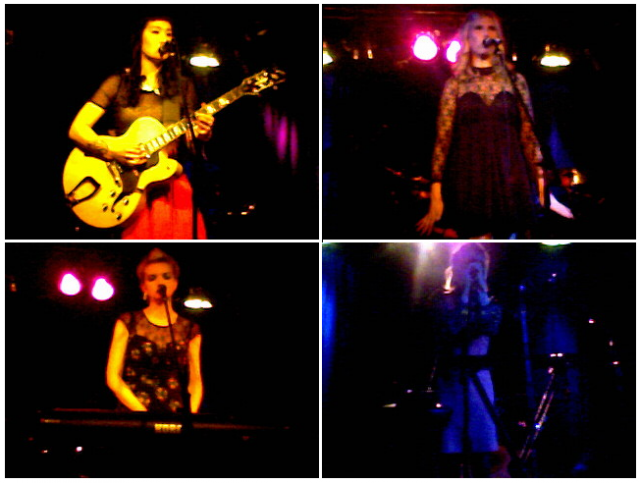 While I’ll admit that the pun in the title convinced me to go as much as the idea of a night of female talent did, the abundance of the latter was the reason I stayed. Lily So & Co, Lucy B, Miss Little, and Rainbow Chan might have only played six song sets, but together these skilled women provided a great night of entertainment and variety.

First onstage was Lily So & Co. Despite lacking one member, the group played a stellar set of heartfelt folky-rock tunes. Their natural presence on stage was definitely a positive, as was the band’s ability to bring every song to an organic crescendo without it feeling repetitive. Lily herself played guitar on five out of six songs, and displayed a powerful voice, though she sounded more comfortable in her lower register. The most notable song was their closing choice: a sultry bass-driven track called “Graveyard” which was described by Lily as being about ‘excess… but sorta liking it.’ The group themselves show a lot of promise, and said they planned to go into a studio soon, which, if their set is anything to go by, is certainly something to look forward to.

Next up was Lucy B, who did her best to channel Fiona Apple circa 1999, but minus the emotional contralto voice, and with added… awkward. Don’t be mistaken, Lucy can sing something fierce, but whenever she stepped back from the microphone (which she did often), her discomfort emerged in the standard self-conscious gestures: repeatedly fixing her hair and clothing, refusing to look at the audience, and that weird shoulder movement thing that so many do. They reveal how nervous an entertainer really is, and in turn, drastically reduce the quality of a show, regardless of talent.
And, Lucy and her band, The B Sides, are talented. In addition to the usual bass-drums-guitar, there was someone on keys, a saxophonist, two trumpets – and if you were able to get past the gratuitous instrumental solos that appeared after the second chorus in every song (accompanied by Lucy’s uncomfortable dancing), they were impressive. I might have found it predictable, but they were undoubtedly the most popular act to take to the stage that night; the place was packed during their 30 minutes, and nearly everybody filtered out when they finished.

Unfortunately for the departing audience members, this meant that they missed the next performer, whom I believe was the most impressive of the night: Miss Little. Her first song began with a serious acappella intro, which established two things. First, she’s got a really solid voice. Second, she was easily the best songwriter of the night. Once the music began, the mood changed and she was all animation, grinning at her bandmates during songs and joking easily with the audience between them. (‘Our next song is called “Trauma”… fun title.’) Even playing the keys couldn’t stop her from jumping around – all the while delivering pitch-perfect vocals. The highlights of her set were the aforementioned “Trauma” and upcoming single “Years”, which is being launched at the FBI Social on the 20th September.

Last up was the delightful Rainbow Chan, who lived up to her introduction as ‘the most adorable, adorable performer ever’ with her sweetheart stage presence. Unlike the other artists, she played her set entirely solo, forsaking band-type instruments for two microphones and an assortment of electronics. With these, she composed expressive soundscapes, layering both vocals and synthesizers – the process of her on-the-spot creation was fascinating to watch, and the music it produced was soothing yet enjoyable. She amused audiences with an unexpected reimagining (read: improvement) of Kelis’ song “Milkshake”, and enchanted them with her very own “Star Picking”; all while headbanging, clasping her hands over her heart, and singing with everything she had.

Overall, the night proved to be a success, demonstrating that there should be more events like this to showcase the understated female artists in the music industry. All of the artists were talented, likeable, and worth checking out.