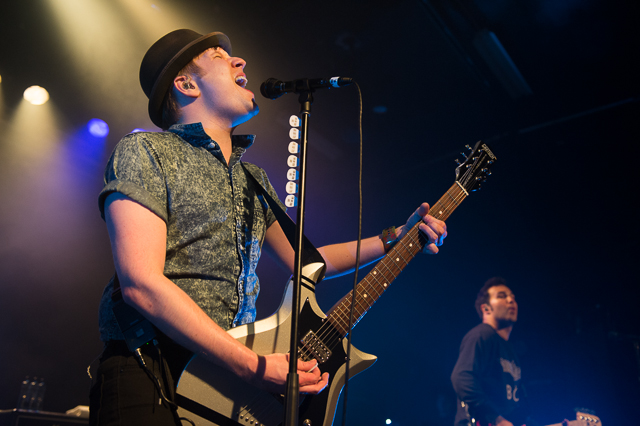 Fall Out Boy’s hiatus might have only lasted four years, but it was swarming with rumours: was it a permanent break? Or would they be back next week? When their official return was announced earlier this year, I assumed it was a joke. A few weeks later, when I turned up to the Metro Theatre an hour before doors and saw the huge crowd that had already formed, I was still convincing myself it was real. And then the boys appeared onstage, and ripped into their first song…

The shuddering instrumental and fan-loving lyrics of “Thriller” made it the obvious choice for opening the show (‘Crowds are won and lost and won again / but all our hearts beat for the diehards’). The crowd sang along with Patrick, raised the horns, moshed like mad — and screamed even louder when Pete introduced the next song by flirting with them. This was particularly appropriate, as it was the epically titled “I Slept With Someone In Fall Out Boy And All I Got Was This Stupid Song Written About Me”. Judging by the audience’s reaction, they didn’t think it stupid at all.

Impressively, the band held this level of control over the audience for the entire show. They’ve always had a wild presence, especially with Pete and Joe throwing themselves around the stage the way they do, but the break has definitely re-energised the band. Older hits like “Dead On Arrival” and “Grand Theft Autumn/Where Is Your Boy” felt tighter and tougher, while their latest single, “My Songs Know What You Did In The Dark (Light ‘Em Up)” was an exceptional showcase of Patrick’s soulful voice. Holding it all together was Andy, who didn’t say a word, but truly unleashed himself on the drums.

Beneath all the stage antics, the band were obviously aware of their audience’s wellbeing. At one point during the evening, they paused between songs to make sure the people at the front weren’t being crushed against the barriers. At another, Pete gave a brief speech about the importance of enjoying the ‘perfect moments’ that life can provide. And at the end of the gig, after the last note of “Saturday” had faded, each member ensured that all their spare picks and drum sticks were given to eager fans to take home.

It would have been easy for Fall Out Boy to spend the show gloating about the frenzy they were causing: three years of nothing, a sudden return to the music scene, and they were already selling out shows again. But the intensity of the show proved that they weren’t here to just pick up where they left off. Fall Out Boy are back, and this time, they won’t leave us high and dry.

Photo Credit to Johnny Au.
View the rest of the gallery here: https://www.theaureview.com/photos/fall-out-boy-metro-theatre-25-03-13