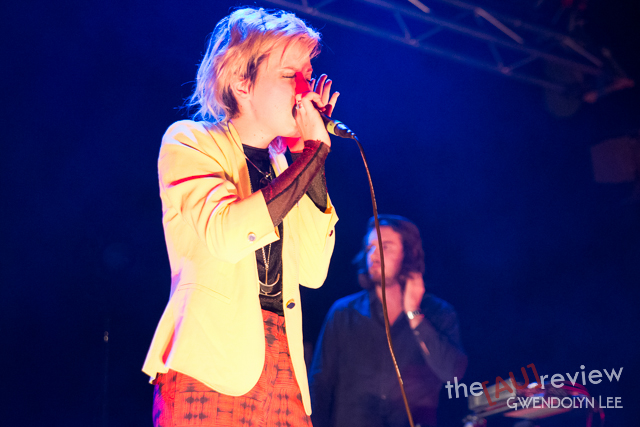 Emma Louise’s vs. Head vs. Heart is easily one of the most captivating records to be released this year, proving that the attention she found with 2011’s “Jungle” was more than luck — she is undeniably talented and utterly deserving of the success she’s having. I attended her show with high expectations, and was not disappointed.

First up was Patrick James. He stuck to the acoustic guitar for most songs, with the exception of “Brighter Lights”, which was played on keyboard. “All About To Change”, the title track for his current EP, was a standout song for me, mainly because of the more engaging instrumental. A set played purely on acoustic guitar can sometimes feel repetitive, but Patrick consciously tried to avoid it. He did this by inviting a friend on stage during the show several times, to play either the banjo or glockenspiel. This added a bit of variety, which I was very thankful for; and so I was able to enjoy his time on stage more.

Thelma Plum was one of the best support acts I’ve seen in a long time. Thirty seconds into her first song, she had stunned the crowd into silence with the emotional depth and range of her voice. The applause was thunderous, and even more impressively, she kept up this level of audience engagement throughout her entire set: when she asked everybody to clap the beat for “Dollar”, they did so for the entirety of the song. Thelma had a quiet confidence about her, and she kept the audience’s attention between songs with jokes or stories. She’ll be touring in July, but until then, I highly recommend picking up a copy of her debut EP, Rosie.

The moment Emma Louise stepped on stage, the atmosphere in the room changed. It wasn’t a “frenzied crowd” reaction, but something deeper; a connection that felt very personal, as though we’d been invited to step inside her mind and hear her thoughts. The intimacy of her performance was overwhelming at times, with “Cages” and “Atlas Eyes” being some of the most moving songs I’ve ever heard live. There were, of course, lighter moments in her set. “Boy” and “Freedom” were both very popular, while her cover of Alt-J’s “Tessellate” was one of the songs that had audience members dancing along.

When she left the stage, the audience began calling for an encore — as is to be expected. To my surprise, the house lights came up instead, and so people started filing out. I was thinking that it was a little odd that she hadn’t done an encore, when the lights went back down and she returned to the stage. As she picked up her guitar, she explained that she hadn’t planned anything for an encore, but in honour of her first night headlining the Metro Theatre, she’d decided to play us one more song.

Emma Louise’s music and live show is a very immersive experience. Unlike a lot of performers, she never established an artist/audience barrier, so her show felt less like something you watched, and more like an experience you were immersed in. This level of inclusivity was as vital as the music itself; and makes her show truly engaging.

Photo by Gwendolyn Lee. View the rest of the gallery here: https://www.theaureview.com/music/emma-louise-thelma-plum-patrick-james-metro-theatre-17-05-13