Local heavy juggernauts Deadlights and Mirrors crushed the final show of their six-date co-headline tour last night at Princess Theatre in Brisbane, celebrating their respective 2021 albums The Uncanny Valley and The Ego’s Weight. Supported by Inertia, Deadnerve and Sunbleached, the stacked lineup brought their all and treated fans to a night to remember.

This reviewer was a little late due to a few wrong turns and unfortunately missed emo openers Sunbleached, although Deadlights frontman Dylan Davidson – who was running the merch desk – said they were sick.

Next was Brisbane deathcore five-piece Deadnerve, who opened with their furious single “Spit”. The band cranked the energy and immediately got everyone’s attention as the pit opened up for a dangerous few to cut loose. Demonic gutturals and bone-shattering chugs held the audience captive as a fan in the front took the mic and bellowed a whole verse with some impressive lows.

Sydney melodic hardcore quartet Inertia took to the stage with an atmospheric presence before kicking things into gear again. The recent Resist Records signees had the crowd moving to big riffs and dark synths while frontman Julian Latouche flipped effortlessly between commanding cleans and harsh screams. Their set was complimented by a captivating lightshow and the pit opened again for helicopter kicks and baseball pitches to huge breakdowns.

Red curtains were drawn across the stage for the next interchange and punters buzzed in anticipation for the first headline act. Gippsland metalcore quartet Mirrors emerged after an eerie cinematic intro with frontman Patty Goodman donning a fur coat. Djent riffs, delayed guitar and syncopated breakdowns bolstered the delicate to soaring vocals and searing screams. A circle pit started before they even began playing “Beneath the Sand”, which goes to show how amped people were for this band.

It returned for heavy cut “Rebirth” and the epic chorus and brutal breakdown of “Leave Them Behind” demonstrated the power they hold over a crowd. Phone lights filled the room for emotional favourite “Damien” and Inertia’s Latouche joined them for guest vocals on album closer “Moral Decay”. When Goodman called upon fans to go hard for the final breakdown of the set, a large group dropped to the floor and began the famed rowing moves. A hilarious but killer end nonetheless. 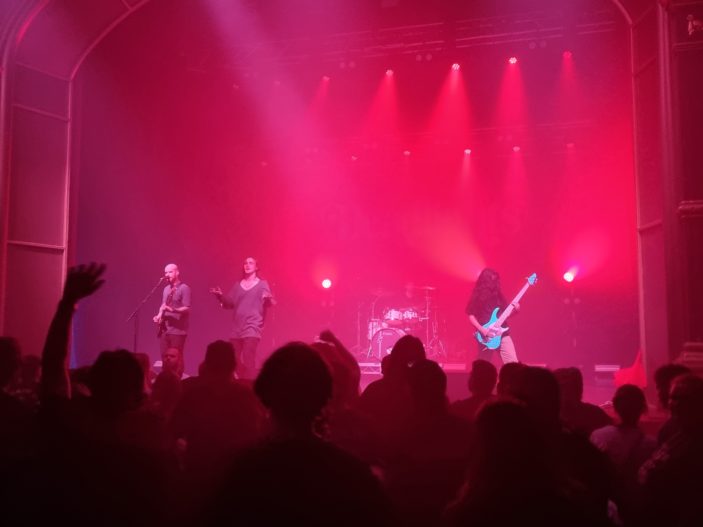 The curtains were drawn again and soon parted to reveal hometown heroes Deadlights under red lights in a thick fog, a fitting visual for gloomy opener “The Uncanny Valley”. Guitarist/vocalist Tynan Reibelt led the track before Davidson entered with blistering screams and the hardcore quartet transitioned seamlessly into “Schedule I”. Technical riffs and simmering synths created an eerie atmosphere spearheaded by syncopated chugs and sporadic breakdowns.

The band launched into deep cut “Electrodrome” with interlude “[I See the Future]”, then fan-favourite “Echo Chamber”. An unexpected inclusion was “Pythia” with added drops and inflections, showcasing Reibelt’s insane vocal range. Davidson gave a speech on live venues being a safe space for ‘beautiful madness’ before “Born of a Lie” and dedicated “Invisible Hands” to the ‘OGs’ in the house. Closing out the night was aggressive single “Bathed in Venom”, which saw a wall of death leave at least five on the ground before being helped up by those around them.

The fact that both of these headline bands only have one guitarist and can play the way they do is breathtaking. With relentless touring and enthralling stagecraft, it’s no wonder Deadlights and Mirrors are quickly becoming some of the best live acts in the scene.