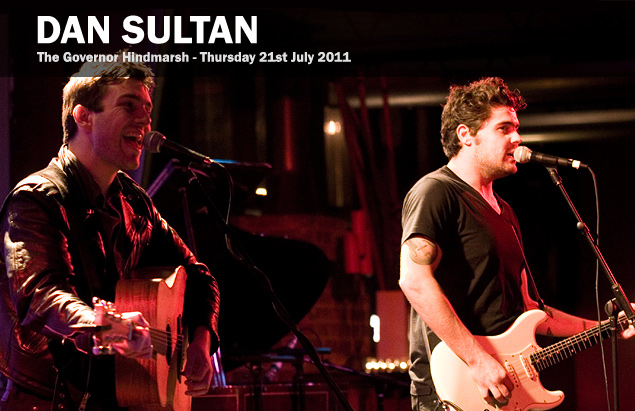 After having taken some time away from music, Dan Sultan was back in Adelaide performing over two nights, with Oh Mercy’s Alexander Gow. Sultan’s popularity is such that Thursday night’s gig sold out and a second show was added. These shows were more of a double bill, than a traditional support and main act gig, which shows the level of respect and friendship between the two performers. This arrangement also meant that many of us were introduced to a wonderful new talent in Alexander Gow.

The Gov had been filled with rows seats and the audience, both young and old (but mostly female) slowly filled the room. It was around 8:30pm when both Sultan and Gow entered the stage to began their set with a cover of Bob Dylan’s “I Shall Be Released”. They followed this up with another cover, the well known Australian classic, Icehouse’s “Great Southern Land”. Delivered simply and beautifully, these covers set a theme for the night of great songwriting delivered with a more casual, stripped back performance. The only instruments on the stage were guitar, piano and harmonica.

Sultan and Gow seem to have a similar sense of humour, both take little digs at themselves and each other in a playful way. Sultan tells a story that while he was on stage supporting Dave Graney, he saw Dave seated at the back of the venue. Assuming Graney was enjoying the performance, Sultan was happily giving it his all, when he realised Graney was actually reading the newspaper. Gow tops this by telling of a gig where he had a woman playing, and swearing at, a Daytona car racing game, just to the side of the stage. In her defense she apparently exclaimed that if they didn’t want her playing it they would have turned it off!

Gow also goes on to explains Sultan’s view on their next song of the set. Oh Mercy’s “Keith St”, apparently reminds him of “Bang A Gong (Get It On)” by T.Rex. Sultan then backs that up by saying he thinks its a cross between ‘Credence and T.Rex, which is a good thing’. About a minute into “Keith St”, the room laughs as Sultan plays the T.Rex riff rather loudly.

Sultan exits the stage after this number, and we spend nearly an hour with Alexander Gow. Tonight I definitely became a fan of Gow’s talent and personality from his performance. He has an endearing, reserved demeanor on stage – mumbling something about his dismay at who was voted off of Master Chef, and telling stories of men mistaking the sound of his footsteps in his new boots for that of a woman in high heels. “Today I felt pretty sexy, and I’ve never been able to say that before”, he said, smiling sheepishly as he tuned his guitar.

Gow played a set of wonderfully catchy folk rock music which the crowd enjoyed. Using his band, Oh Mercy’s back catalogue ‘We have had two albums, this song is from the first album, so I can say its from our back catalogue’ he introduces much of the audience to songs such as “Lay Everything On Me”, as well as songs from the bands latest album Great Barrier Grief such as “Stay Please Stay” and “Mercy Valley”. He also included an amazing cover of Leonard Cohen’s “The Future”, giving another nod to an amazing song writer and storyteller.

There was a short intermission between the end of Gow’s set and when Sultan emerged for his solo set. Sultan treats us, first up, to three songs on the piano which had so far been dormant at the back of the stage. While he continually plays down his piano skills, I am more than impressed by his talent on the keys, and one of the most memorable performances of the night was “Saints of Self Abuse”, which Sultan tell us is about a gentleman who had spent fifteen years in a Thai prison.

Sultan has recently taken a break from touring to do normal things like “take his cat to the vet”. Usually traveling with a seven or eight piece band, this tour is uncomplicated, with only guitar and piano arrangements for his songs, which usually are dominated by horns and percussion. He explains that after taking time off from the hectic touring schedules of the past he had decided a little solo tour might be good for him. “For some fans hoping to see his songs performed just the way they are on the record, they might be disappointed, but I say whats the fun in that?” The captivating, stripped back version of ‘Your Love is Like a Song’ which he then performed was a perfect example of how different the songs can sound reworked like this, but there was no way anyone in the audience could have been disappointed.

With Sultan we journey through a mix tracks including “Old Fiztroy” off of the album Get Out While You Can, and a new song with the working title of “Kimberley Calling” about the Kimberley region of the Northern Territory. After taking a moment to drop the hint that he is thirsty, ordering a vodka and tonic from the stage (a classy drink, for a classy guy) he launched into a beautiful, soulful rendition of “Forever”. Allowing the audience some insight into his songs, their lyrics and the motivation or inspiration behind them; Sultan introduced the next number, “Enemy” from his first album, Homemade Biscuits, by telling us it is a song about driving trucks and “…the things you gotta do to stay awake and get the job done.”

It was a the very end of his set that Sultan bought out the Elvis moves as he finished his set with “Lonesome Tears” off his most recent album, and it seemed a shame to end the night at this moment, on such a high level of energy after what was a relatively mellow set. Having not previously been lucky enough catch Sultan live, I had no comparison to go on in order to make a verdict as to whether the simplified and down-played set was successful. Dan Sultan makes the kind of music that forces toes to tap and hips to sway, yet the low key arrangements also allowed for lyrics and mood to become more central to the performance.

Sultan soon returns to the stage, jokingly acknowledging that encores are bullshit: “a nice bit of bullshit. You know i’m coming back,” he laughs before heading for the piano once more. He played the wonderfully fun and upbeat “Fear of Flying” off of Get Out While You Can,’ a version that included some fantastic Little Richard-esque rock’n’roll piano.

The night then ended as it began, with both Gow and Sultan on stage together. It is clear that the two artists would have been happy to play the whole night together, jamming and covering their favorite artists. There was a rare chemistry and camaraderie between the two that just fed into the music and allowed a precious opportunity for fans to experience such a casual and warm performance. They take this time to close the show with two more covers, Gow introduced the first number as a tribute to a man who made if possible for Indie music to exist, before they broke into an impassioned version of Tom Petty’s “I Wont Back Down”. And the evening wrapped up with a glorious cover of Paul Kelly’s “To Her Door” which left everyone singing and smiling, and there were heartfelt thank shared between audience and performers.