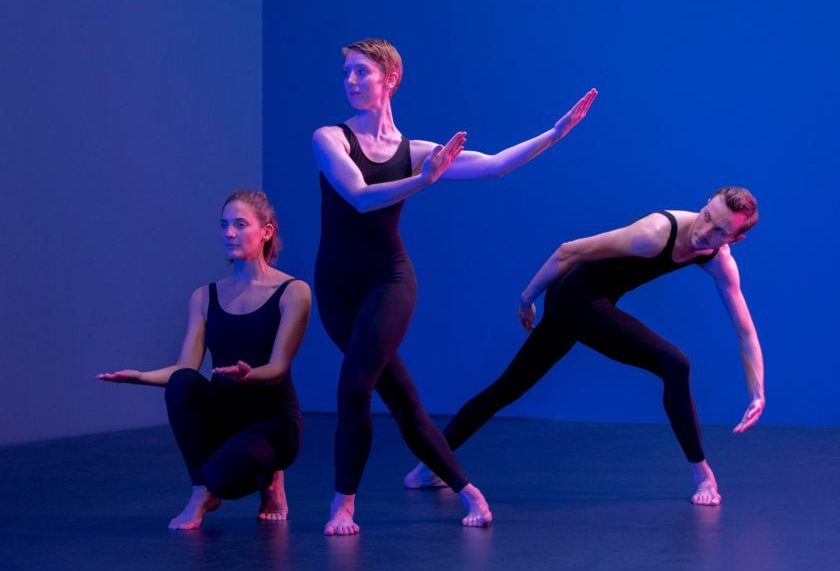 The exhibition primarily includes works from 20th Century America, across styles of Abstract Expressionism, Light, Minimalism and many of the other important artistic movements from that time period.  Included in the exhibition are a number of iconic pieces, such as Warhol’s famous Campbell’s Soup cans, a mixture of Jackson Pollock‘s popular and lesser known works, as well as Lichtenstein’s comic-inspired prints.

The evening’s main musical act was the Brass Knuckle Brass Band, a Canberra-based ensemble, and the Merce Cunningham Residency Dancers, who were supported by some trumpet and electronic instrumentation from Ben Marston, a local contemporary improvising musician. The Merce Cunningham performance was a very interesting and engaging start to the evening. The routine comprised of three dancers, all performing with Sol Lewitt‘s Wall Drawing No.380 as the backdrop. The performance meshed fluid and smooth movements with more jarring, repeated movements, which worked well to form a contrast between the different sections of the routine. Trumpets and some synthetic drums played as the backdrop, fitting beautifully with the feeling of the expressionistic art in the room that followed on from the first performance space.

The music played an important part in the exhibit. Used as a backdrop for the artwork at large, it was a way of setting a tone, and allowed visitors to become fully immersed in the period of American history many of the works were born from. Incorporating these music and dance-based elements into the consumption of the art was an interesting combination, but, one that worked extremely well. The tones of the music, and the overall mood it set really accentuated the experience that came with seeing the art – an odd form of synaesthesia that contributed strongly to the overall feeling of the night.

This is less a review of the live performance, and more an overall review of what the performance did for the exhibition as a whole. The Brass Knuckle Brass Band showcased a funky set of Americana-inspired jazz music that set a great rhythm from early on. Consisting primarily of brass, and a single member on drums, the band enlisted a number of great melody switches and chorus elements that instilled a palpable energy that proliferated throughout the gallery.

Original song “Double Three” was a huge standout from the set at large, with a dominant trombone section, and less instrumental density than many of the previous songs. Though it still set a strong danceable rhythm, setting the scene for all brass members to synchronise – forming a beautifully complex chorus section, as if it was pulled out of thin air. This slick track was the standout perpetuator of the Americana influence that was palpable throughout the set.

David Abkiewicz, the band’s sousaphone player, was vital in setting the pace of the set, using the deeper brass instrument to add syncopated or synchronised rhythms, adding a level of depth to many of the songs, whilst also acting similar to a synthetic bassline allowing the other elements of the band to structure themselves around the proverbial backbone.

Overall, both musically and artistically, this event was as unique as it was high quality. The choice to combine period-inspired works and music provided for a more immersive experience than simply touring a silent gallery, and is a testament to the level of care shown by the National Gallery of Australia in curating this events. This multi-discipline event will definitely spawn more for the gallery, and they are more than worth checking out.

American Masters: 1940-1980 runs until November 11th at The National Gallery of Australia. For more information about the exhibition and the works on display click HERE

The author attended the event on 14th September 2018.