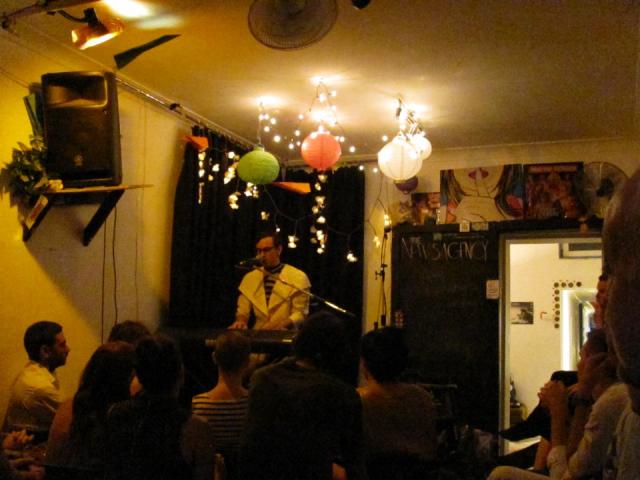 Tiny little streetside hole in the wall, The Newsagency, prides itself on being a venue for songwriters. A place where music fans can come and enjoy grassroots artists; performing in a lounge room style setting. Even the gig itself was touted as Brendan Maclean’s own personal birthday extravaganza; with a line-up consisting of Maclean’s own friends from the indie music community on the bill.

If you’re a Sydney music fan you may recognise Andrew Bennett. He was the frontman of the exquisite and difficult to categorise band The Dawn Collective. After the band parted ways in 2009, Bennett began working with Maclean as his guitarist and backing vocalist. However, the desire to work on his own music returned and he’s now out showing off his songwriting wares.

Bennett is a master lyricist, conjuring vivid narratives that are accompanied by his sensitive acoustic guitar. There is even the odd story about Bennett’s pet cat giving him flack for suffering through a scorching summer day, that is somehow intertwined into the lyrics of “Have You Seen My Friends”.

Single “Satellite” is loud and bombastic, even on a lone guitar and it’s obvious this track will be a feature, once Bennett gets his full band onstage with him. It can be difficult to imagine how these songs will sound once there are additional instruments in the mix. I look forward to hearing where these songs end up.

I was not familiar with Eirwen Skye but was immediately mesmerised by her interesting take on indie folk songs, created entirely using a bunch of random instruments fed through a loop pedal. Admittedly this can be a real hit and miss way of making music, and even Skye herself fell victim to a looper that went a bit glitchy at one point.

But overall her skills using a ukulele, a recorder, a melodica and even some beatboxing served her well on tracks like “Be My Carousel” and “Something Borrowed”. As Skye even put it, we were getting a recap of all her failed relationships at lightning speed during this set and it seems that breakups are truly songwriting fodder. Despite the depressing notion of singing about lovers past, it was obvious that Skye was having a lot of fun onstage, and it felt like we were just sitting there in her lounge, whilst she kicked out a few looped tracks for us.

Miss Little was another of Maclean’s musical associates. With beautifully sweet vocals and a dreamier approach to her lyrics; she reminded me a little of Kate Miller Heidke style wise, but with a more refined almost pure feel to her music. Her single “A Place Without Time” which features on her current LP When Things Fall Apart and Into Place was a definite stand out.

Despite flying solo; she manages to improvise a drumbeat using her own foot stomp for “The Overflow”, which works nicely in the intimate surroundings. Then to cap her set off Miss Little dedicates a magnificent cover of Rufus Wainwright’s “Poses” to our headlining main man.

Our birthday boy Brendan Maclean is a staple of the Sydney indie pop music scene. He even admitted outright that tonight was a self-indulgent affair, an opportunity to have musicians who he admired and respected performing to friends in an intimate setting. It’s inspiring to see the Sydney music community, both musicians and punters alike keeping this idea alive, and making it happen.

Maclean’s set is a remarkable mix of acerbic examinations of social interactions in such songs as “Cold And Happy” as well as the usual fare of relationship fuelled tracks like “OnlyOnly”. Switching things up from performing on the electric piano solo, to bringing his fellow musical comrade’s Andrew Bennett on guitar and Lee Carey on drums up to fill out the sound. It’s not quite the full band, but even if he wanted them all they wouldn’t fit on the tiny stage of The Newsagency.

A Maclean gig is incomplete without a song or two strummed on his ukulele aptly named Murphy Brown. Not to mention having a musical mash-up of Madonna’s “Express Yourself” with Laday GaGa’s “Born This Way” on aforementioned Murphy Brown. As testament to how fond his fans are of him (and how well they know his sense of humour) one even brought along shortbread cookies shaped like penises for the audience to share.

It’s all fun and games for a little while but it’s his more poignant and sombre tracks that allow emotional depth shine through. Brendan had Miss Little join him onstage for a touching duet, a song about growing up sad called “Where Do We Fall Now”. It seems that the simplest emotions and stories are the ones that are the most relatable, particularly in song form.

In show closer ballad “Beat Me To It” Maclean interweaves classic Muppets tune “Rainbow Connection” in, an homage to where Maclean’s own track started from but also a concurrence of the meaning behind both songs. Sometimes breakups can be stinging and torturous but sometimes this just makes you want to strive for more. The night was a fabulous demonstration of local Sydney talent, but also an example of a community that loves music coming together to showcase that talent. Here’s hoping that we can see more of that in the new year.