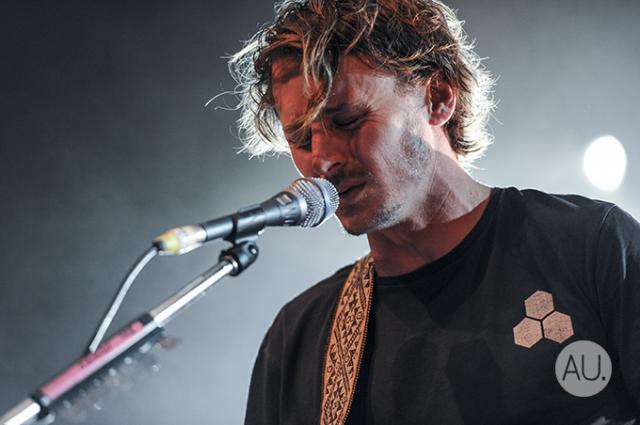 Friday night saw Ben Howard finally make it across west for a sold out show at Perth’s Astor Theatre, kicking off a run of dates that sees Howard also take to the stage at Splendour in the Grass. Yet this was a show, as Howard revealed, that came ever so close to being cancelled, with an injury to regular drummer Chris Bond leaving Howard and a newly assembled band just 48 hours to rehearse.

Kicking off proceedings was Nick Mulvey, former percussionist and founder of the Mercury Prize nominated Portico Quartet. First Mind, Mulvey’s debut solo album has been a favourite of mine since its release back in May, so it was great to finally hear these songs in a live setting. It was only a brief set, maybe 30 minutes at the most, but it was more than enough for Mulvey to charm and win over sizeable chunks of the crowd with his intricate guitar playing. “Fever to the Form” (maybe my favourite from the album) and “Cucurucu” were just two of the highlights.

Ben Howard has been one of my favourite musicians for a little while now, yet despite coming from the same part of the UK (Devon), I’d never gotten the chance to see him live. So naturally, with the announcement of a Splendour Sideshow in Perth, I jumped at the chance to get tickets and finally get to see him live. Thankfully I managed to snap up some tickets before they sold out, and he didn’t disappoint live either.

By the time Howard and co took to the stage, the Astor was packed, which made the slightly longer than usual wait between acts just that little bit more uncomfortable (the fact that they didn’t change the background music didn’t help). Despite a warm welcome from the crowd it was a bit of a subdued start, with much of the first song played in near darkness. Though it didn’t take long for Howard and the band to warm up.

With Every Kingdom, having been out for a while now, it was unsurprising that the songs from that album were greeted with the biggest cheers from the sold-out crowd, with “Keep Your Head Up”, “The Wolves” and “Only Love” among the highlights and drawing the biggest cheers. They were also the songs that had the most people reaching to their smart phones (something which didn’t go unnoticed by Howard). Howard also slipped a few new songs from his upcoming album into the set as well, including a ‘world premiere’ which, I’m sure if you look hard enough, you’ll find somewhere on YouTube. The new songs show a slight shift in Howard’s sound, with perhaps more of an indie rock-esque sound to them.

There were a number of highlights throughout the set, but two of the standout moments were a fantastic rendition of “The Wolves”, which featured some lovely call and response between Howard and the audience and a beautiful version of “Only Love”. I would have liked “Old Pine” to make it into the set-list, but on the whole I thought it was a well thought out and executed set that flowed well. That being said the lack of an encore (something we’ve come to take for granted) took much of the audience, myself included, by surprise.