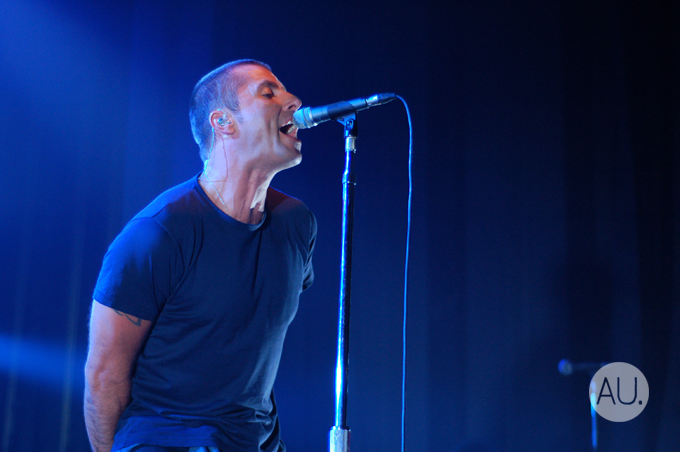 After releasing two albums Liam Gallagher finally brings his band Beady Eye to Australia as part of the 2014 Big Day Out tour for the first time since Oasis disbanded. For the faithful Oasis fans and for the British ex-pats it was an opportunity to finally get to see the notorious frontman and his bandmates in action again.

To open the night Melbournian Davey Lane warmed up the small crowd who were all clamouring for best positions on the barrier. Davey has been around the traps for many years as part of beloved rockers You Am I but now venturing out into the scene on his in-name-only-lonesome with his accompanying band. Opening with “Sinking May” off his debut ep The Good Borne Of Bad Tymes.

Lane’s entire set is reminiscent of the Brit-Pop wave of the 90’s dipping occasionally into soupy shoegaze or throwing in hints of electro. His band crank out some fantastic backing vocal harmonies and his drummer even gets dubbed Ringo by the fans down the front due to his snappy suit, ray bans, and sporting an impressive moustache. The 45 minute set feels very polished for material that’s so fresh, a testament to Lane’s experience and performing with adept musicians as part of his band. I’m certain that there will be plenty more to come from Lane’s camp in the coming months.

After a rather loud changeover interlude filled with The Beatles, the Rolling Stones, and the Sex Pistols blasting through the house speakers it was time for Beady Eye to take to the stage. Opener “Flick Of The Finger” sounds like something from the Oasis Don’t Believe The Truth era but immediately following this track is “Face The Crowd” which has lots of clapping along and Andy Bell whipping out a tambourine and the crowd is immediately riled up, and this song doesn’t feel remotely Brit-pop at all.

The slower tracks like “Soul Love”, “Second Bite Of The Apple”, and “Shine A Light” really seem to drag though, and don’t really resonate with me and it seems that crowd is tolerating these in anticipation of the more energetic tracks to come. The biggest cheers of course are reserved for Oasis hits “Wonderwall” and “Cigarettes And Alcohol” and even though Gallagher had in the past refuted ever playing these songs in a Beady Eye set, it’s obvious that his past is inescapable. I refuse to believe that Gallagher, and particularly his ex-Oasis bandmates Andy Bell, Gem Archer and Chris Sharrock miss the sound of a crowd of people screaming their song back to them and the rush you get from being in a room of excitable fans.

No matter how much you’d like to scrap the past, it’s the fans that want to hear those songs, and playing them makes them happy. As we near the back end of the set “The Roller” and “Bring The Light” both off the first record Different Gear, Still Speeding sound like interpretations of The Beatles with their fast paced peppiness but still have that rock authority with tinges of psychedelia. After an awkward encore where the house music blared a little too loudly and the lights stayed up a little too long the band returned to close the evening with one song, a cover of the Rolling Stones’ classic “Gimme Shelter”.

There’s no denying that Liam Gallagher is a quintessential frontman and executes the role perfectly. There’s a swagger and effortlessness in his performance, with his trademark pose of arms and hands crossed behind his back and leaning into the microphone he propels his lyrics out with a subtle power that coats the audience. Personally though I’ve always struggled with his vocals, they generally have a more nasally tone that can come across as a little whiney. It’s his style and part of his character, but it did make it difficult to appreciate the slower songs where the focus falls more on his voice than on the music, and I think the only song I found an exception to this was the ballad “Start Anew” off their current LP BE.

As a unit the band perform with the ease of a well-oiled machine, a lot of this is obviously due to the fact that they (mostly) were Oasis in another life, but it’s good to see that they maintain that calibre of musicianship. As I mentioned earlier the slower songs were definitely a bit of a buzzkill, and it just felt like the room had way more vitality during the faster energetic songs, this was emanating both onstage and offstage in the crowd.

This was a good show, but just not remarkable.