Everyone knows these days, “how Australian you are” comes down to how many Ball Park Music concerts you’ve seen. After five albums and a gazillion national tours it’s only fair that this Australian icon makes its way on to our $100 dollar note . Embodying everything we love about Australia and just being an all round bloody good time these guys are the ideal face of our country.

Joined by Perth royalty San Cisco on their co-headline tour, this match made in heaven is 2018’s cutest couple.  Of course every good couple has a loveable third wheel, so they’ve brought along Ruby Fields and put together a massive four hour show. This all ages event on Friday 21 September packed a sold out show in to Canberra’s UC Refectory. A bleak cloud dampening Canberra gigs year in year out, this venue has horrible acoustics and huge unavoidable pillars that ruin any chance of getting a good view. Needless to say these legends pulled it together and I’m going to go as far to say this was my… all time favourite concert.

Those prepared for the huge line to get in, saw grungy goddess Ruby Fields bound on stage with personality to match her 2018 garage rock, belter of a track “Ritalin.” Following with the more stripped back songs off her debut EP Your Dad’s Opinion For Dinner “Redneck Lullaby” and “Libby’s Pink Car,” hit us with a masterclass showcasing the depth and texture in her voice.  Ruby’s set told a narrative on stage with lines like “I wanna be the clean cut virgin every guy seeks at the bar, I wanna be more than my parents’ opinions and my ATAR,” becoming an anthem for all eye rolling teens.

A proud mum moment had me in a daze as she launched in to the whimsical “Dinosaurs” released only earlier this week, forcing me to clean up my Hottest 100 shortlist making room for this beauty. Plain and simple, Ruby’s heart-on-her-sleeve lyrics are spotlighted and no matter how many times you listen you can never be prepared for the explosion in the final chorus. The fact that only a few people knew the words didn’t stop all eyes from being transfixed on Ruby, while diehard fans lapped up this new tune, one guy congratulating himself, saying to his friend after the set “I only cried twice in Dinosaurs.”

Closing with debut single “I Want” Ruby Fields got the recognition she deserved with the whole room singing and cheeky grins and chuckles spreading as she sung relatable lyrics like “I don’t wanna smoke for a false sense of validation.” Under all her non-compliant pessimism her charm really comes to the forefront in her performances and Ruby Fields undoubtedly kidnapped some new fans after that simply stunning show.

From here on out, in cult like fashion every person passionately chanted every word to every song.  Goosebumps activated within seconds as San Cisco launched in to the fairy-like intro of “The Distance”, before pounding us with a conflicting heavy bass and the light and heavenly vocals of lead singer Jordi Davieson. Two songs in, it was clear San Cisco were not going to let anyone relax, actively putting together a packed setlist of songs that would make even a lizard want to dance, while Jordi reminded us “This is for everyone who just wants to have a good time.” The crowd in a homogeneous sway to sweet pop ballad “Beach”  lead in to funky, jazzy tunes “SloMo” and “Wash It All Away”, skyrocketing the intensity of the show similar to what I imagine a cross-fit class to be. (Not that I will ever find out what a cross-fit class is like, these concerts are enough exercise for me.) Bringing out the Rockstar in San Cisco, “Magic” highlighted ever so sweet but badass on the drums Scarlett Stevens, who impressed with her vocals, making the lyrics “chicky chicky ah ah chicky ah ah, chicky ohh ooh chickity oh ah” sound so much better than that weird mumble should.

“That Boy” was a highlight for me, the entire crowd with their hands in their air, suddenly appreciating the magnificence of Jordi’s vocals as our screechy, deafening singing was as piercingly terrible as the sound of a phone alarm. Most of the room knew the words to new single “When I Dream” and it was exciting to hear this live for the first time and get pumped for new San Cisco music, potentially heading in the optimistic stoner pop direction of this song. Finally, an overwhelming sense of sweet nostalgia swept through the room as they closed their set with hits “Snow,” “Did You Get What You Came For,” “RUN,” “Fred Astaire” and “Too Much Time Together.” 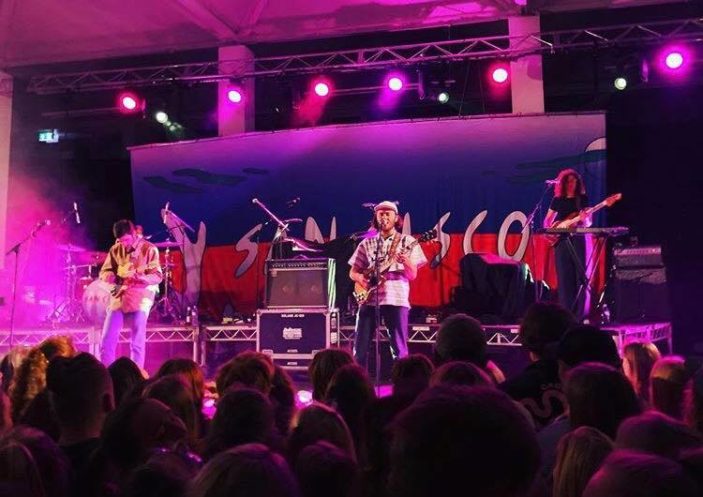 No awkward pointless banter, San Cisco are performance pros occasionally throwing out funny and cute one liners introducing “Wash It All Away” by saying “this it to all the fucked up couples out there.” Radiating happiness and care-free fun, if I had a dollar for every time someone said “I want to marry Jordi” I would… buy more San Cisco tickets.

Ball Park Music hit the stage, sweeping up all my emotions in a shotgun, blasting them round the room, leaving me with no choice but to take every spine tingling moment as it came.  Opening with “The End Times” off their most recent album Good Mood, this electronic base stuffed with memorable hooks encompasses all things Ball Park and ticks all the boxes of the ideal opener.

“Everything is Shit Except My Friendship With You” was born to be played live, the entire room fist pumping, and screaming like protestors (happy protestors who just want more good music- which of course Ball Park delivered.) Adapting their set list from recent shows, the strong melodies, groovy beat, driving guitars and thrashing drums of “Nihilist Party Anthem” and “All I Want Is You” highlighted the musicality of all five members.

Next we got fan favourite, “It’s Nice to Be Alive” taking it back to their first album in 2011, which is now always played acoustically by lead singer “Sam Cromack.”  Hearty and honest, Cromack beams warmth and passion, innocently serenading the entire crowd.  Playing “Bad Taste Blues Part 2” on this tour for the first time in two years was overwhelming for day one fans, showing their seemingly never-ending catalogue of hits. Perfectly positioned in the set slow harmonic and simply charming “Coming Down” and “Alligator” were perfectly executed and gave me butterflies, the same kind you get when you see the love of your life.  (I guess this makes Ball Park Music the love of my life?)

2017 Hottest 100 placed “Exactly How you Are” united the whole room like one giant group hug as everyone turned to their friends and cried “I love you exactly how you are” before doing a complete 180 and closing the set with energy driven jamming balls of fun “Sad Rude Future Dude,” Trippin the Lights Fantastic” and “Literally Baby.” Cruelly finishing on these high intensity songs we were left thinking what do we do now, this night is not ready to end.

Probably due to restrictions of the venue, unlike some of the other destinations on the tour Canberra remained confetti free (much to the cleaner’s delight I’m sure), and stage effects were kept simple, but it was captivating none the less.

Talented, sweet party starters, Ball Park Music are an Australian gem with the versatility that we can never get sick of.  50 year olds and 15 year olds alike come together at Ball Park Music sets to share a love for good music, good friends and a good time unmatched by any other band.  Not only that, they truly do fit their self proclaimed title “Australia’s loveliest band.”

The whole night dripping in self-deprecating honesty, care-free dancing, and joyful music, it’s confirmed Ball Park Music, San Cisco and Ruby Fields all do their bit to make the world a happier place.  I’m especially thrilled for Ruby Fields, who held her own against the industry heavy weights, and if Ball Park and San Cisco’s success is anything to go by, we will be seeing a lot more of Ruby in the future.

Dopamine draining, we need a few more doctors down here in Canberra because we are coming down with a bad case of post concert depression. Don’t mistake me for being easy, this night has earned itself five big sparkly golden stars!

To get tickets to the rest of the Ball Park Music + San Cisco tour click HERE.

The reviewer attended the performance at UC Refectory in Canberra on Friday, 21st September 2018.