It’s not always that bands manage to get the ideal opener for a tour, but headliners San Cisco and Ball Park Music hit the winning ticket with Ruby Fields. The pocket rocket of a musician had it all for her sadly short opening set, with failed jokes, rocking guitars and her usual Aussie charm. Ruby’s set began with her thrilling EP’s lead up single “Ritalin” which was introduced to raucous applause from the already built up crowd. The rock ‘n’ roll guitar line and Ruby’s quick active vocals left a mark and kicked off what looked to be an incredible tour. 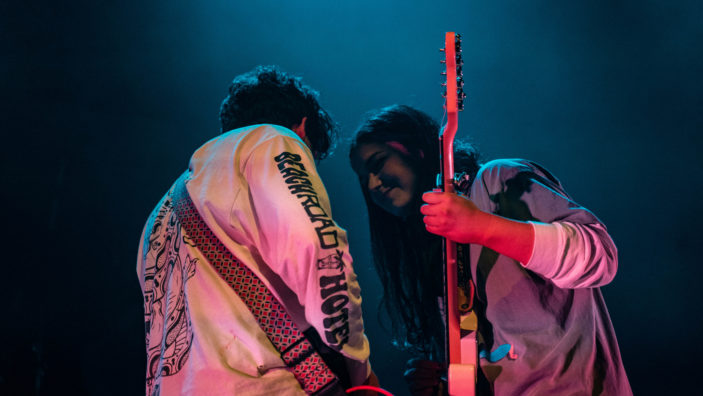 It was just the right amount of energy from the Sydney rocker and paired perfectly with the coming act San Cisco as Ruby’s rough indie rock kept the spirit alight. The set pumped and the stem of power through the set was only halted for a moment, coming in the form of her track written about her mother, “Red Neck Lullaby”. Stating it was the only “emotion” she was going to display through the set, ”Red Neck Lullaby” was a quiet highlight in a performance filled with distinct guitar lines and firey drum hits.

Her two career opening singles, “I Want” and “P Plates” closed out her set. While the tracks are still young in the scheme of things, they were easily well known by the party of people in the hall. Ruby’s dynamic and honest writing about growing up thoroughly entertained the crowd, but also contained an ounce of truth which was reflected through the young crowd of the all ages show.

The long standing indie rocking four-piece of Fremantle, San Cisco put on a show to be remembered owning the Festival Hall stage for over an hour. The set was clearly one meant for a party and they lit up the opening show of their country wide tour alongside Ball Park Music with style. 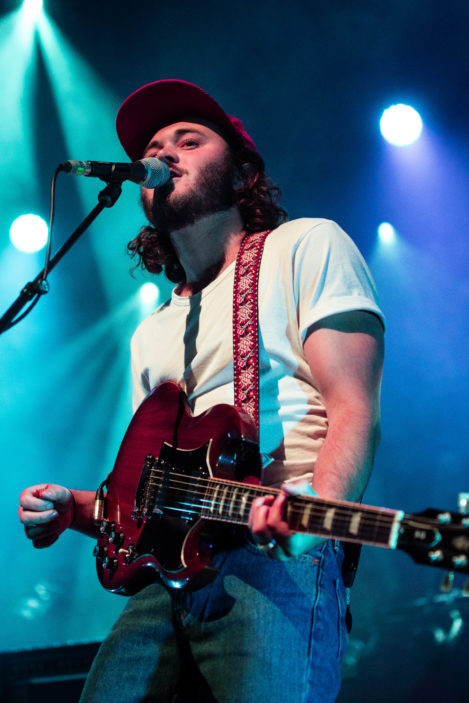 Firing into the hits immediately, San Cisco opened their tour account with “The Distance”, their lead up single to their third album The Water. The opening synths of the track sent the crowd overboard, with cheering so loud Festival Hall may have started to shake. The boppy, spirited number was the perfect opener for the enlivening band who has a history for fun and adventure up on stage.

The hits didn’t stop coming as the tunes came as thick and fast as the bass lines, the set containing fan favourites “Slo Mo”, Wash It All Away” and “Magic” leading through the early part of the San Cisco dance party. The bop of “Hey, Did I Do You Wrong?” with it’s jazzy guitar and punchy vocals set a perfect scene leading into San Cisco’s new single, “When I Dream”, released only a day before the performance, while it didn’t leave enough time to learn the lyrics for a sing-a-long with the crowd, the belting drum beats and hearty vocals from Jordi meant that the party went into meltdown.

After a long hiatus from the song while touring, San Cisco’s now famous Triple-J ‘Like A Version’ of beat-master duo; Daft Punk made a faithful appearance. “Get Lucky” again rose the atmosphere to an even higher level, being a song the whole crowd knew, they jovially sang and danced their way through the cover as San Cisco worked a little of their own buoyant charm into the track.

Time flew after “Get Lucky” as a slew of San Cisco fan favourites led to their big finish. The fanciful “Jealousy”, “Awkward” blasted through as the incredibly lively, “Fred Astaire” turned it up again before lead singer Jordi Davieson introduced San Cisco’s famous song about ‘spending too much time together’. San Cisco’s “Too Much Time Together” brilliantly ended the set as San Cisco sprinted to the end, the well known track, with its bluesy chords, jubilant group vocals and bouncing keys was exactly what was needed in the lead up to the Ball Park Music set, keeping the baying crowd content for that extra thirty minute wait.

Ball Park Music’s set stole the act; and while it would almost have been too easy to leave Festival Hall after San Cisco’s enticing, upbeat set the punters remained, surely ready to be rewarded for their time in the premiere venue. The band opened with three massive tracks – “The End Times”, accompanied by confetti cannons to start the show off with some real zest and excitement, “Everything Is Shit”, followed by “The Perfect Life Does Not Exist”. The three opening tracks helped Ball Park pick up where San Cisco left off, putting the simmering energy in the hall to an immediate use. “It’s Nice To Be Alive” caused the band to leave lead singer Sam Cromack for a solo acoustic rendition of the track. The crowd were behind it, singing along to the cheerful track.

The band’s set was a masterful combination of their new and old tracks, with Sam getting somewhat nostalgic as the Melbourne performance found itself almost ten years to the day that Ball Park Music set off on their journey to become one of Australia’s leading indie outfits. As such, it was only right that the band returned to their first album Happiness And Surrounding Suburbs and use it to play a string of hits not seen on their touring circuit for some years. This meant tracks such as “Bad Luck Blues Pt. 2” and “Alligator” where are selling point of the Melbourne setlist, using the heavier sounds of Ball Park Music’s early albums to thrill the crowd, some songs appearing back on tour after a long hiatus. 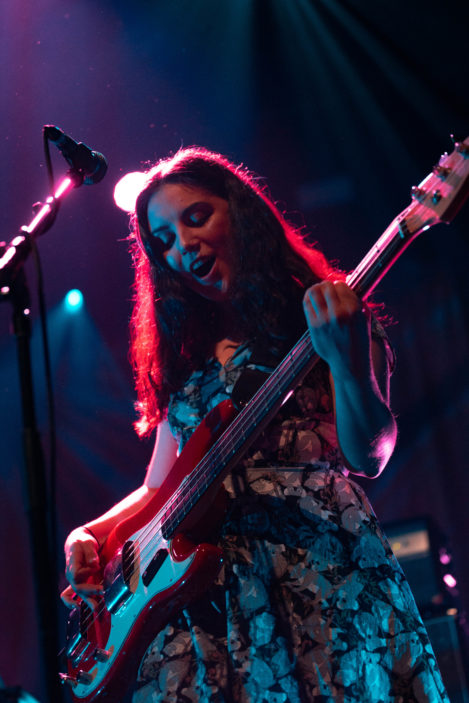 They kept their Brisbane sound abouts them, funnelling the magic of fellow Queensland band Custard through their cover of the band’s song “Apartment”. The grungy sound of the track with its thumping bass and shredding guitar; courtesy of bassist Jennifer Boyce and lead guitar Dean Hanson was a reminder of the talent Ball Park Music held over music, hurtling their sound deep into the cover while still having it remain a cover.

Ball Park Music’s sound was infectious and much like San Cisco before them, their music has taken a minor evolution over the years being in a band, yet their sound has been a happy one from the outset. Ball Park Music manages the joyous nature of their tracks, yet they’re still able to have a real sense of purpose behind their lyrics singing about the anxieties of real life with that enterprising charm the band has developed.

The final song for the bulk of Ball Park’s set was a mixture of “Sad Rude Future Dude” and “Pariah” with the elongated renditions of the tracks feature some instrumental magic from all of the band’s members. Both the twins, Dean and Daniel Hanson on guitar and drums respectively, produced some of the greatest solos of the evening. With shredding guitar lines and Dan’s thundering drum solos set the stage alight, highlighting the members individual talents within the respective whole of the band.

Ball Park Music closed up their encore with their first album’s opening track and a song that helped send them on their journey, “Literally Baby”. While it didn’t have the energetic impact of “Alligator” or “Sad Rude/Pariah,” the nostalgic nature and fun loving atmosphere it created up on the stage captured the sound Ball Park Music has been playing from the beginning and gave every punter in Festival Hall an excellent ending to a brilliant performance.

Ball Park Music and San Cisco continue their tour around Australia through the month ahead. For dates and more details head HERE.

The reviewer attended the performance at Festival Hall in Melbourne on 7th September 2018. Photos by the author.