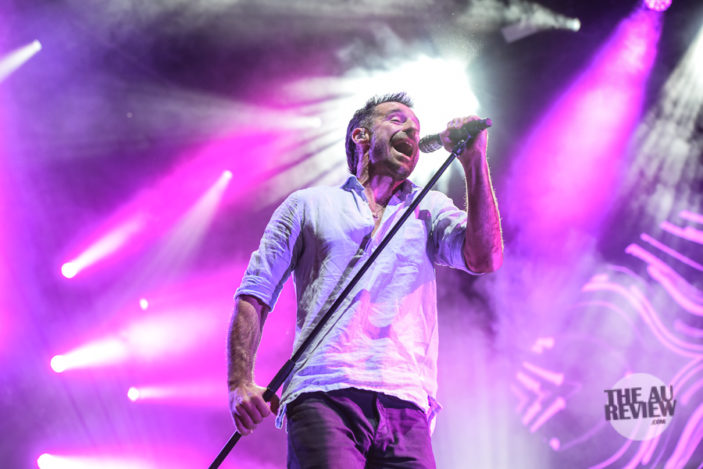 The weather slowly warmed up over the Adelaide Cup long weekend, making Sunday a perfect day at Womadelaide. Rugs marked meeting spots under the trees. Lines formed at the free water stations. Some visitors discovered artist workshops and Planet Talks. Kids had plenty of zones and activities to keep them busy. The lifting of some COVID restrictions meant that dancing was now permitted.

Sunday is also a day where stories of previous acts worth seeing are told. One such act was San Francisco-born alt-pop sensation Reb Fountain. After playing an evening set on Friday. Fountain and her band were scheduled for mid-afternoon on Stage 3. With comparisons to Patti Smith, Kate Bush and Florence and the Machine, the set captivated the assembled crowd. Understandably, as her latest album Iris, debuted in October at #1 on the NZ Album charts.

To mix things up completely, Yiddish collective YID! presented their unique style of electronic dance, Weimar cabaret and indie-pop. The infectious music was delivered by a rag-tag crew of characters. This was the first of two main performances for WOMAD and I’m sure many went back for more.

Like a ray of sunshine on an equally dappled Zoo stage, Elsy Wameeyo was an enchanting sight. Growing up in Adelaide with Gospel music influences, the Nairobi-an born songstress captivated the audience with her radiant smile and uplifting songs.

As the sun settled over Stage 2, Emma Donovan and the Putbacks were equally enthusiastic presenting their soul-funk and Indigenous protest music. The WOMAD message is one of peace and love and this attracts artists who share that vision. The language of healing and positivity is a powerful force in this sometimes-harsh world.

Celebrating 40 years since the release of debut album Spirit of Place, Goanna were confident and happy to front the main stage. Original members Shane Howard, Marcia Howard and Roslyn Bygrave are embarking on a yearlong celebration tour, and it was fitting that the journey starts with WOMAD. They were by several special guests including John Schumann and Emma Donovan.

Over on a blood red stage, beneath the screeching of the bat colony, a demented harlequin, Carla Lippis, presented Mondo Psycho. Purring, screeching, contorting and entrancing, Lippis and her band evoked dark European cabaret. The driving guitars and screaming keyboard painted an image of decadence and wrath. Maybe not all the messages at WOMAD were meant to be positive and uplifting.

At the opposite end of the park, Electric Fields were presenting their own haunting electronic music. Zaachariaha Fielding has the voice of an angel, and the keyboard sounds of Michael Ross create an intriguing ambience of electronic music. Featured special guests Antara singers and Tjautja First Nations Dance Collective were equally captivating. Simply a divine moment.

Meanwhile, back over at Stage 2, Sorong Samarai, from the extremes of Papua New Guinea, created an epic soundscape of drums and electronic music. Combining traditional sounds of the jungle with modern samples, beats and noise, this new genre of music must be heard to be believed. It’s almost overload, with an equally impressive lighting set making it a visual and aural feast.

Closing off on the main stage, The Cat Empire have long been WOMAD favorites. However, after twenty years together, they have announced that they will close the original line-up. This made it all the more poignant, but the enthusiasm and energy that they exuded had everyone dancing. Front man Felix Riebl knows how to work an audience and his enthusiasm is infectious. A beautiful way to end the day as DJ Jayda G played her brand of dance music on Stage 7 on the way out.