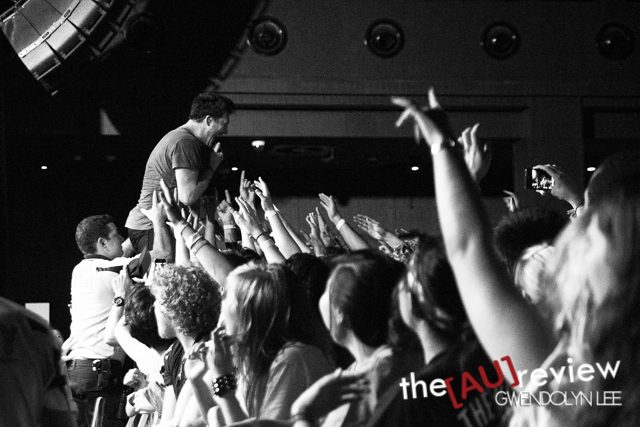 Having only become an Anberlin fan in the past year thanks to the recommendation of a close friend, I wasn’t sure what to expect from their live show. Yes, they made rock music, but how would the energy transfer to the stage? However, with such a strong line up, it wasn’t hard for my friend to convince me to attend. And I’m so glad she did.

The night began with Masketta Fall — the only Aussie band on the bill, and they played a solid set. The catchy simplicity of “Parachute” was a standout, yet the band’s strength clearly lay in their more slow-burning songs, like the excellent “If Today Could Last Forever”. Ultimately, it was the vocals of Braden Daniel (AKA ‘Faybanger’) that appeared to impress the audience the most; particularly during their cover of “Teenage Dirtbag”. While I wouldn’t go out of my way to see them again, their set was plenty enjoyable.

Next up was William Beckett, the former frontman of The Academy Is… Equipped with two acoustic guitars, and his laptop to play the background instrumentals to his music, Beckett played an excellent set. He combined his older solo material, like “Just You Wait”, with standouts such as “By Your Side”, taken from his recently released debut record Genuine and Counterfeit, but unsurprisingly, there were no TAI… songs. The peak was the soaring final number, “Benny & Joon”, which had the entire room cheering along, satisfying the old fans, and undoubtedly earning him some new ones.

The Maine were the final support act for the night, and hit the stage with a set that was straight-up spectacular. Their song selections were balanced between all four of their records, including older numbers like “We All Roll Along” and “Misery” — a personal favourite of mine, from their most recent record Forever Halloween. The highlight of their set was easily their classic “Into Your Arms”. In the red-green light, with the audience singing along, and John taking a moment to banter with the crowd, the feeling was euphoric. I confess I was somewhat stunned when their set finished; already planning when I could see them perform again.

From the moment Anberlin took to the stage, there was a noticeable change in the crowd. Maybe it was the way they pressed themselves towards the barrier, maybe it was the passion with which they sang along; but the intensity of the connection between the audience and the band was a truly beautiful sight. Combined with the electrifying atmosphere and the deep-coloured lighting, I couldn’t help but wonder why a band with such presence weren’t performing in a larger venue. Their energy was far more aggressive than I’d anticipated: pure rock star.

Their setlist was predominantly comprised of songs from Cities, and their most recent release, Vital, although some older music did thread its way through. Stephen had impressive control of his vocals, transitioning easily from his rougher growl to the smoother, wider notes. It would be impossible to select what songs were standouts, due to the overall strength of the set, but my favourite moment was easily the encore, which featured the emotional “Dismantle.Repair.”, played on piano, and “(*Fin)”, performed with the full band, and the voices of the crowd.

Anberlin’s entire show was outstanding, from their choice of support acts to their own hour-and-a-half long set. For those who are yet to catch them live, I highly recommend buying tickets now so you don’t miss out. It’s an experience you won’t forget.

Photograph by Gwendolyn Lee. View the rest of the gallery here: https://www.theaureview.com/photos/anberlin-the-maine-william-beckett-masketta-fall-the-hi-fi-07-09-13