Australia has always been known for folksy storytelling and our love of music. We’ve seen it through countless generations from Slim Dusty, Paul Kelly and now again in Alex The Astronaut. It’s the connective power of these stories and how relatable they are that makes these artists people to look up to and celebrate.

Thursday night kicked off Alex’s latest “Space Tour”, joined on stage by Emily Soon and Hatchiku, both wonderful storytellers in their own right, to build a subtle intrigue into the evening.

Emily Soon was the enigmatic opener for the tour, and much like Alex herself Emily was a soloist that excelled in the use of the acoustic guitar. Her opening set was well placed as her smooth vocal work and happy banter settled as a well choiced introduction for the evening’s affair.

With the sounds of her slender voice and the synth keys hanging in the air, Hachiku wowed the growing crowd at the Corner Hotel next. Her music was a heavenly mix of sleepy synths, guitar and simmering vocals. Her set wasn’t long, but she easily lulled the crowd into her music with many of her current releases, “Moon Face”, “Zombie Slayer” and “Polar Bears”, playing a large role in her set.

The sound floated through the bandroom and brought a different atmosphere than may have been expected at an Alex the Astronaut show, but it was a welcome change of pace that kept the night fresh as Hachiku displayed a different side of songwriting and storytelling in music.

And then it was time for the star of the show; Alex The Astronaut delivering an unforgettable night filled her her signature pep, whimsical musings about merchandise, the songs with Paul Kelly and her life, all filtering through between her music.

Her set still held heavy focus though and included a swath of her now beloved recordings nearly all coupled with a story about their meanings. “Rockstar CIty”, “Happy Song”, “Already Home” and “What Sydney Looks Like In June” were all apart of the wonderful set started off by a song dedicated to all those called “William and Georgia”. 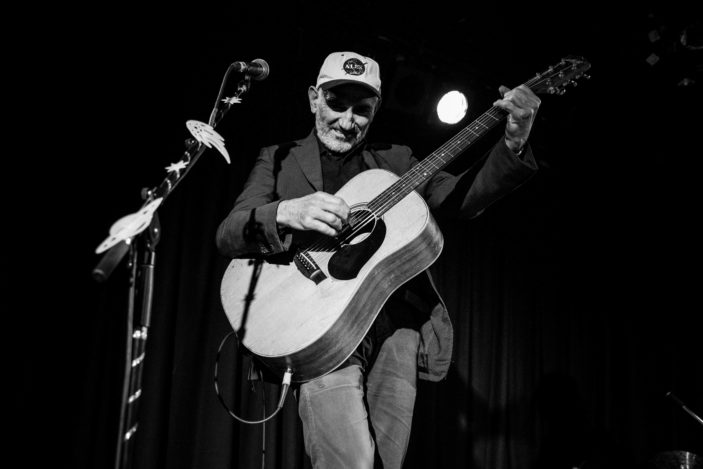 As Alex regaled the crowd on the lead up to the release of “Not Worth Hiding”, a cheer arose from the crowd as the room swelled with a sense of anticipation, it was a beautiful moment seeing hundreds of strangers all get behind a cause and artist because of music.

The biggest surprise of the evening was the addition of Paul Kelly to the ledger, popping his head out on stage to sing two songs alongside his fan and friend, Alex The Astronaut. Their combination was a powerful one, with most of the crowd already floundering at the fact Paul Kelly was there at all. Having Paul there was also a wonderful call back to one of Alex’s earlier works, “I Believe In Music”, as Paul and Alex played the late David Bowie’s “Space Oddity” to the adoring crowd. Together, their music highlighted the evening as the faithful twang of their worn guitars and the familiar humming of Paul Kelly’s harmonica worked as a harmonised duo well versed in their respective music style.

Her close was a stirring rendition of “I Believe In Music”, as Alex’s guitar glistened with the markings of a wonderful life. Alex weaved the lyrics alongside the chords as she had dozens of times before, but it was too great effect as the crowd, for one last time tonight, sang along with the songwriter. As happily as she had arrived on the stage, sadly Alex the Astronaut departed, but the buzz created around the artist’s oft-cheerful tunes was kept alive by the crowd well into the night.

Alex The Astronaut continues her Space tour in Sydney this Friday night, and then heads onto Perth over the weekend. For full dates and ticket information, head to her official website.

The reviewer attended the show at the Corner Hotel in Melbourne on 22nd November 2018.