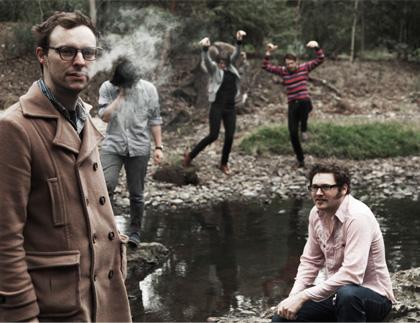 Heading through the strange venue that is The Buffalo Club, I felt I was in some sort of strange vortex of time between war-time Australia and a fashion palace that was dimly lit for an accidental hippie. Regardless, the venue provided an unusual backdrop for some slightly unusual music (maybe not too unusual if you’ve seen some of the gigs that I’ve seen). First up was Seagull, who wowed the sparse crowd with a serene almost drone-like noise which could only be described as Thom Yorke mixing his voice with Bon Iver and adding a Casio keyboard in there. It was wonderful to hear some of these songs raw as opposed to their more rebellious debut record.

Near Myth were a little more straight up and down with their music. Playing some pretty buoyant pop songs, but entertaining with a lead singer who likes to banter with some intriguing stories behind song titles – one of them being an anecdote about how washing the bathroom inspired the aura of one particular track. I loved how the band were also teetering between being playful and serious. The revelation later in the set that this was their third gig ever probably explained that, but for some reason, I loved how unsure they were. Maybe it’s that element of bands wanting to impress audiences so much live that we see some of them dwell into a sameness on stage over time. Therefore the new-ness of this Near Myth was refreshing to see.

One band that certainly has not fallen into the trap of dwelling into sameness is Aleks & The Ramps. The troupe of quirky musicians jumped on stage and performed their life out to a half filled room. It was interestingly awkward, but also very amazing to see a band play and not give a crap that there were huge bright squares flickering on and clunky banjo noises coming from somewhere. The lyrics to their latest single ‘Middle Aged Unicorn On Beach With Sunset’ refers to Shakespeare, crystal meth and other random words, and they were sung without a blink of an eye. They also played the peculiar pop of ‘Antique Limb’ and many other old songs that made you think more so than dance (and I’m pretty sure there was a bit of that happening in this venue). For some reason it was engaging to witness these strange happenings going on stage and in the audience. I weirdly loved every moment of it.