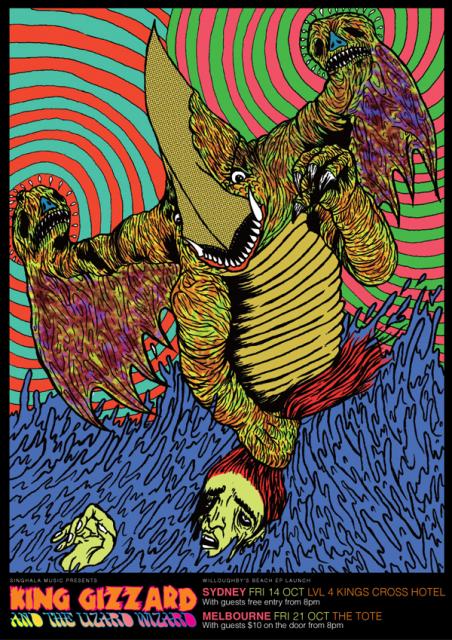 We said that ‘Black Tooth’ was music to rob banks to, well, King Gizzard and the Lizard Wizard‘s next single, ‘Dead Beat’ is the soundtrack to the pre-heist party.

The second single to be taken from the band’s forthcoming EP, Willoughby’s Beach, ‘Dead Beat’ is as subtle as an uppercut and equally affronting (albeit in an only slightly less bloody manner). Unparalleled for sheer fury, ‘Dead Beat’ is an incendiary proposition from the get go, pulsating with manic energy and dive bomber runs delivered at breakneck pace before settling into a suspenseful and visceral groove.

King Gizzard and the Lizard Wizard will bring their horrorshow to the good people of Melbourne and Sydney when they launch Willoughby’s Beach this October. Look out for the nifty 10″ EP available at both launches.
For more details head to www.facebook.com/kinggizzardandthelizardwizard