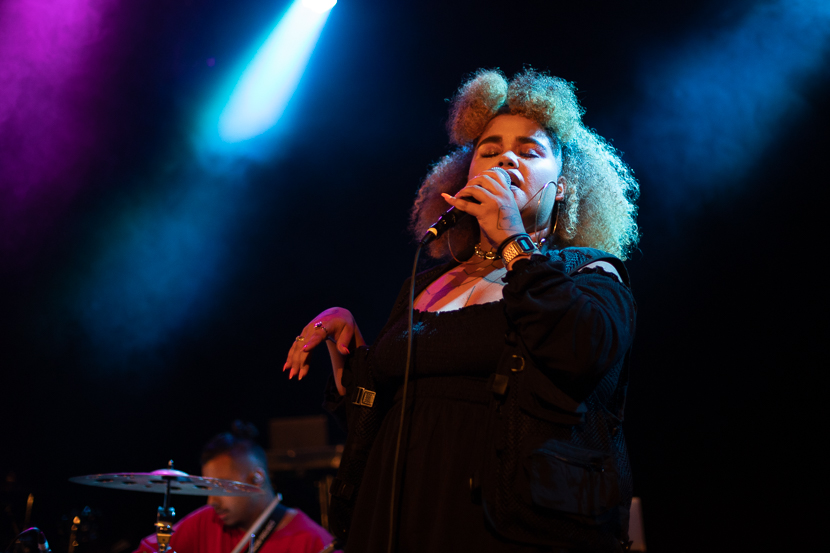 KAIIT is a 21-year-old R&B protegé currently based in Melbourne, but making some serious waves across the nation. Her debut EP Live From Her Room has garnered her an incredible amount of attention and even landed her the Unpublished award at the 2019 Vanda & Young Global Songwriting Competition.

At such a young age, this performer appears well beyond her years, with an incredibly polished live performance that had the audience questioning whether her Splendour set was actually her debut.

We caught up with her straight after her performance to debrief, and even got a little surprise appearance from Genesis Owusu.

KAIIT, you’ve just gotten off the stage of your debut Splendour set. How are you feeling right now?

You kind of just kicked it back in. I was like chilling, yeah but, so special. It literally just felt like a show that I’d have, like of my own. Every one is singing, what! And all their hands up, that killed me, that killed me.

It was such a special set and particularly you had your mum do a welcome to country, I got goosebumps. I’m a Wathaurong woman myself and that was like the most seamless way to do it and having your family there and it was so nice.

It is so important. Very, very important to me and having my friend made me realise, because I had my mum do an acknowledgment at my Melbourne show. I remember hearing that, like my mom is usually quite a shy person so it was really huge for her to just do that alone. I was like, “You can speak behind the curtain you don’t have to go out.” But she was like, “No. I’m going to do this.” And just representing and welcoming people especially people of colour and people that may not usually get acknowledged, we see you and we see that you’re here and we’re thanking you. So thankful to be on this land, I cannot stress that enough. All of these shows, especially the tour, it’s just spirit, that’s the only way. That’s how I felt up on stage. My mum gave birth to me, literally gave birth to me, brought me into this world, and she brought me up on stage to be here and it’s so crazy.

I think spirit is such a quintessential word to your performances. You are such an impassioned person and you can really tell, like for me I was blown away by the fact that in my mind you’re pretty new to the scene, right? But your performance looks like you’re a veteran. You are so comfortable on the stage, you know how to work an audience, you are born to do this.

Thank you so much. Yeah I find it bizarre when people ask right before I go up to perform or whatever. They’re just like, “Are you nervous, are you feeling anxiety?” Like, no, like I’m excited to do this. People are wanting me to be here, people are there for me, people are there to listen to good music and I’m thankful that I can be a part of that. None of us need a trip, It’s all good.

That’s so right when it comes to the craft. This is what you love and you want to share it, so why be nervous about it? And you’ve got your tour coming up, the Miss Shiney Tour. Are you excited, what’s planned for it, anything special?

I’m super hype. We literally just did the Melbourne and Sydney show and those sold out thankfully. That was so beautiful. It was crazy and the people that come through to the shows literally reflections of me, we are literally reflections of each other, you know. It’s crazy how looking into the crowd and seeing how similar certain things are, physically-wise the amount of beautiful… Just everyone coming through. It’s been so special, we’ve had all these visuals, we’ve had these crazy blue lights and I didn’t realise but the blue lights make…

Your eyebrows like insane, because the orange will pop!

And I did not even realise that until when I was seeing the footage after, I’m like, “What the fuck.” And then I got told later because I don’t know, singing may look or rapping may look easy and you’re just jumping but noooo, no, no.

That is a workout I imagine. 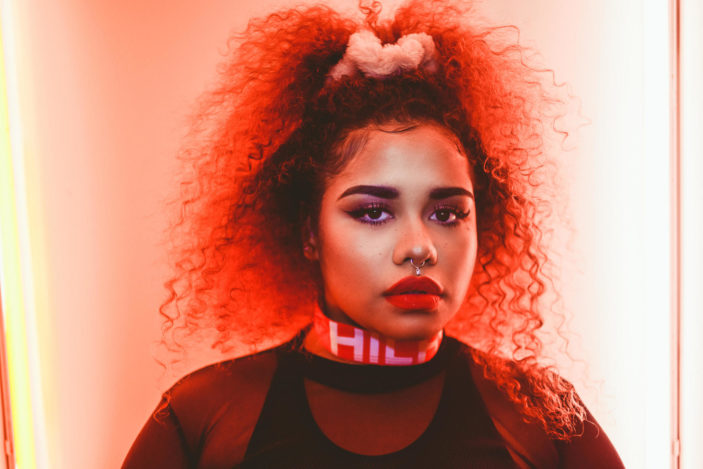 That would be so cool though. I reckon that’s a vibe. Also, another big exciting thing, you’re going to be supporting SZA at her Melbourne show. In a Vogue interview last year you said you’ve always wanted to collaborate with her. This is a milestone, this is massive for you.

Literally speechless. I’ve most definitely been manifesting this shit. I’m thankful it has come to fruition and I am so hype. I’m tripping to see her in person.

Have you ever met her?

I have not. Maybe we have met before?

Maybe, I mean so you’ll meet her at Splendour for the first time I imagine. Will you get to link up with her here or just on her side show?

You know what I’m really funny about coming up to people. As artists do and everyone you get in your head heaps and I’m just like these people just want to do their own thing, I totally understand. I’m just going to let them do their thing and if it happens, it happens. I always trust the process, so yeah I’m super hype to interact and pick up rain, and I don’t know give her some crystals.

That’d be so cute and just to know that she knows you exist is wild. Talk to me about, I’m curious about manifesting. What’s your process in manifestation? Because I’m quite a pragmatic manifester in the sense that I don’t believe in manifesting unless there’s action behind it, not just wishing upon a star, you know what I mean? But I have a lot of friends who are like, “I’ll say it, it’ll happen.” Tell me about your manifesting.

You know it was just a full moon. Like two nights ago. The moon last night was crazy too but the full moon it was super special like being under the full moons lights and just speaking some shit into existence, things that you wanted to happen or wanting to change but like you said you need to put action behind that and you need to acknowledge and change or whatever. I love to write things down too because if I find somewhere and I’m like, “Yo, that’s trippy. I did that. I was able to do that.”  But I think it’s a beautiful balance between hard work and… beautiful universing and you put shit out there.

Yeah, and I think there’s such power in knowing the abundance of what can happen to you. Just being like, “That can happen to me. I deserve that, I’ll make it happen.” But a lot of people don’t even think that, that it can happen.

Another thing I wanted to quickly chat to you about before I let you go, and my research might be completely wrong but speaking of obsessions. Alex Wolff? Was that a thing?

I’m actually dead, I was obsessed with the Naked Brothers Band. Yeah, on Nickelodeon. They turned out cute.

Yeah they did and they all have great acting careers going on, both.

Oh my god that’s right. But I messed with Alex a little more. I think it was the curly hair that did it.

I think I was more of an Alex fan, not that I was a big Nickelodeon fan. Do you dress yourself, do you style yourself?

I do, yes. I just really enjoy it, I didn’t even think of it as that until people were like, “Do you style yourself?” I don’t know I just really enjoy just finding pieces and putting things together. Savers and op shops are my jam – this was $20 from Savers, this dress. This was like $6.

You look way more expensive than that.

That’s what I love though. Op shops are literally the best and it’s like you’re not buying something new, something that’s being recreated, it’s already on this earth.

And also nine times out of ten better quality than whatever is in the stores at the moment, right? [Genesis Owusu walks past] Yo, he’s got grills.

GO: Yo, what’s up? Yeah, I got these teeth for free two days ago and they give me a lisp.

K: Shout out to Chesire The Grin though, hooks me up with my teeth.

GO: This was like a Uni student who did like metal work and he loves making jewellery and he’d never made a grill before and he’s like if you modelled this for my video, you can just have them. So, now I’m out here shining, shiny. You know what I’m saying.

They are actually so dope though, like they light up a room.

Guys, I’m just going to want to wrap this up now and I just want to hang out. Is that chill? Can we just do that? Awesome. Well thank you KAIIT and Genesis Owusu, thanking you for gate-crashing.

Catch KAIIT on the rest of her Miss Shiney Tour. For more information and tickets, head here.