It’s Summer Up There! The Final Day of Glastonbury Festival 2010 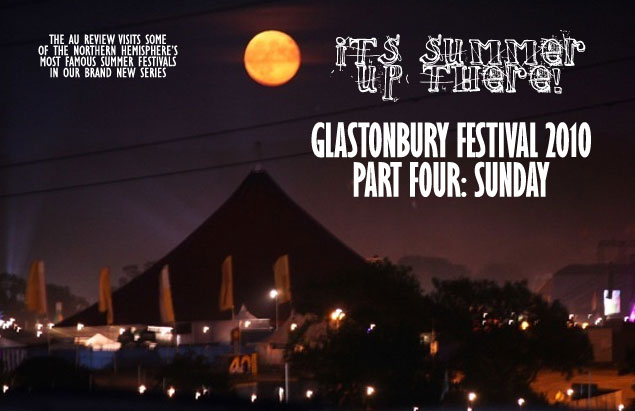 All good things must come to an end, even Glastonbury. So now we are onto the last day of Glastonbury, all that’s left after this is a wasteland of tents, and trip back to home comforts. The day started off well, with Frightened Rabbit on the Other Stage. They played a strong set, and showed great energy and spirit, considering it was still quite early in the day. There was some great interaction with the crowd; including an attempt at one-to-one conversation for a brief moment. The sheer quality of their live sound really is a testament to the quality of their records. That they translate their songs with such ease is great – leaving them instantly recognisable and singalong-able. Highlights of the set were multiple, simply too many to mention. The leader singer broke into a little Hold Steady homage in the midst of the last song, in honour of the band that would be following them on stage.

So up next, as revealed, were The Hold Steady fresh from the release of their new album. I had forgotten how much of an energetic and downright crazy performer Craig Finn actually is. He barely stood still for the whole set, leaping and jumping around the stage preaching to the crowd. Yet his delivery was spot on, though they could perhaps have done with turning his mic up a little, it did occasionally get lost in the mix. One thing I would notice is that now that former keyboardist and accordionist Franz Nicolay has left, there is less flair on the keys – though Finn does a good job at bringing the flair and intensity back all by himself. I suppose I am just nostalgic for the days of a moustachioed man swigging whole bottles of wine, whilst playing some rather fancy piano riffs. They dedicated ‘Stuck between Stations’ to Frightened Rabbit, which was a nice touch.

Next on were, Melbourne’s The Temper Trap, so understandably the Australian flags were out in force amongst certain members of the crowd. They put on a good set, but it wasn’t stand out. Some of their set began to get a tad repetitive, and it seemed that many were there simply to hear one song. But then ‘Sweet Disposition’ did turn out to be a real highlight, one of those moments where everyone, even the casual observer, can sing along. That song alone managed to make up for the rest of the set, and really was the perfect song for a sunny Sunday afternoon. At the end of The Temper Trap’s set there was a mass exodus with a sizeable number of people going to one of two fields set aside for what would ultimately be England’s final world cup match against Germany. Those that stayed were treated to an assured set from Brooklyn’s Grizzly Bear, who put on a great show. However, I would perhaps argue that their brand of music doesn’t come across best in a festival setting – saying that I found it to be a good solid performance that highlighted a range of their work. I would have liked to see some more audience interaction, but I suppose there is only so much you can do when you have a limited time frame and want to play as much as you can.

After Grizzly Bear, I decided to uproot myself from the Other Stage and head across to the Acoustic Tent. As I arrived a Gospel Choir was just finishing up, and they certainly had the crowd eating out of their palms; they were swaying and shouting. The first act I saw on this new stage were the imaginatively titled The Blues Band, an odd inclusion in the acoustic tent, seeing as none of them were playing an acoustic. They were an ‘aging’ group of blues men, who by the sounds of it have worked with a number of the greats, like Eric Clapton. They played a strong set, and benefited greatly from some great harmonies and some supreme blues riffs. Not a bad find for a spur of the moment decision.

The next two acts were the ones who I had come across to see, first up was Loudon Wainwright III – with a name like that you’d be a fool for thinking he was anything other than an American folk singer. The patriarch of the Wainwright musical dynasty was nothing like what I was expecting. I was expecting him to be a more mellowed version of Rufus. But instead he was lively and funny. Indeed he was every bit a comic as he was acoustic troubadour. He put out a set which he described as being all about death and decay; but despite their themes, they were brimming with sardonic wit strong enough to counteract even the most depressing of lyrics. There were some great sing along moments that involved the strangest of lyrics. He played a number of tracks from albums across his career, plus a few from his forthcoming album Songs for the New Depression.

Next on the stage was Richard Thompson, well known for both his solo work and for his work as guitarist with Fairport Convention. He was also fresh from his job as curator of this year’s Meltdown Festival in London. It was a wonderful set, full of crowd favourites and personal favourites. There was some great crowd interaction, including a few requests (of which most were played). His guitar work was flawless throughout, and really validated his high ranking on the list compiled by Rolling Stone. Some of the highlights of the set were “Beeswing”, “Vincent Black Lightning” as well as new song, “The Money Shuffle” taken from his forthcoming album. The song was dedicated to the financial sector, and it seems that even at Glastonbury we can’t get away from the recession talk. The new song follows much in the same vein as his previous album, and bodes well for the new album. The real highlight however was the impromptu duet with his son Teddy Thompson on song “Persuasion”. It’s a beautiful song made all the better by the setting and the singer, and really was my festival moment I suppose.

To close out the festival I went to see Rodrigo Y Gabriela, having previously seen Stevie Wonder on his most recent Australian tour. The crowd were fully behind the duo, the energy from the stage being magnified by the band. As you would expect, the guitar work was astounding – both of them were marching around the stage beating, strumming and thrashing their guitars. Despite not speaking a huge amount on stage, they still managed to get some great crowd interaction, with Rodrigo directing some great synchronised clapping. Much of their set was dominated by tracks from their latest album 11:11, but despite this it certainly seemed to go down well with the crowd. It was a nice end to a great weekend of music.

Following them, I went and had a wander around some of the nightlife areas; through Shangri-la, Aradia etc, stopping off in Shangri-la for a cold pint of the local delicacy – Cider. I then headed off to a rather great little area called Strummerville; which is essentially a gazebo like structure and campfire where band’s can book in to play impromptu sets. I saw some band (whose name eludes me) who played a sort of quasi folk punk which seemed to go down reasonably well.

Ray Davies lead the Pyramid Stage crowd in sing along, backed with a band and a choir, Lola and Sunny Afternoon got an outing. Dr John brought the spirit of New Orleans to the West Holts Stage. The Middle East played the Queens Head, whilst later fellow Australians Empire of the Sun headlined the Park Stage. Stevie Wonder closed out the festival with a hit laden set, and was joined on stage by organiser Michael Eavis for the song Happy Birthday to celebrate Glastonbury’s 40th Anniversary. Other Stage headliners Orbital were joined by the latest incarnation of the Doctor (Matt Smith) for a rendition of the Doctor Who theme tune, replete with lasers.