Is this the most affordable festival in the world? Meet the event where Lady Gaga and Billy Joel play for less than $8 a day.

When it comes to festivals in Australia, if it’s not a rare free event, it’s expensive. Though sold out, Splendour in the Grass this weekend, including camping, was over $450 for the three day (and a bit) event. Not including flights, transport and day-to-day costs, like $8 beers (I can only assume).

Finding a single day event under $100 once you include booking fees is a rarity, even when it’s a mostly local affair. But we’re used to it. Our dollar is strong, minimum wages are higher than most other comparable countries and the music industry relies on these events to make money for their artists – so the costs are always going to be inflated compared to what we experienced ten years ago.

Looking to the USA, what we pay for one day here can often get you into two or even three days at events like this weekend’s Lollapalooza, Coachella and Austin City Limits. All of which have been total sell outs for 2014. And then there’s the $50 a day gem that is the New Orleans Jazz Festival. In the UK, things are slightly more comparable to Australia – though based on current exchange rates an equivalent to Splendour – say a T in the Park in Scotland – will be about 20% cheaper. And then there’s Canada. While you’d expect most of its festivals to be roughly the same cost as the USA, they seem to have found new ways to create festivals that are so affordable it makes the rest of us look like chumps.

Take the Montreal Jazz Festival, which we brought you coverage of earlier this month, an event which mixes a multitude of outdoor free stages with paid indoor events. It’s what we’ve come to know from an event like the Sydney Festival, except instead of the odd free event here and there, you have 11 days of some 10 stages, bringing the public a taste of music from around the world – this year that included Diana Krall, Deltron 3030, The London Souls and our very own Melbourne Ska Orchestra and Wagons – the former of whom delivered two incredible sets, headlining the main stage on one of the nights. It was a sight to behold, in front of what must have been tens of thousands of people – all seeing a band they’d likely never heard of. It’s the power of “free” – sure – but moreso, it’s the power of a 35 year old festival who has garnered the trust and respect of its public.

The indoor events range in price from $10 all the way to some $160 – a top tier ticket to Aretha Franklin would have set you back about that – and combine the biggest names with some of the festival’s favourites, like Matt Andersen, who is relatively unknown here in Australia (though he performed at Bluesfest last year), but regularly fills up rooms here in Montreal. Seeing the city’s centre transformed in the way it is is nothing short of extraordinary; there’s no wonder it’s one of the year’s most anticipated events. But it’s fair to say that for the big names, you are generally going to fork out the cash, unless it’s a freebie. Not too different to Australia. But then we went to Quebec City and experienced the other side of the proverbial coin… 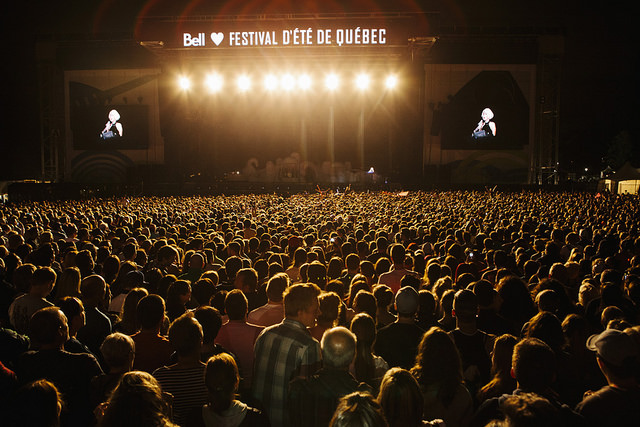 Kicking off around the same time as the Montreal Jazz Festival this year – running July 3rd to the 13th, with the Jazz Fest running from June 26th to July 6th – is L’Festival d’ete de Quebec. Or, as it’s more simply known to us Anglophones, the Quebec City Summer Festival. Running a similar 11 days as the Jazz Festival, the event brings together a mix of bands who play the Jazz Festival, alongside groups who are enjoying headlining runs across the USA, and some carefully curated groups for all ages and languages (French and English, anyway). Though there are free outdoor stages to be found (such as the Hydro-Quebec Stage where we caught Gary Clark Jr. and Trombone Shorty), the two main outdoor stages, as well as a series of indoor clubs, require a wristband. The wristband’s cost? $78. Yes, $78. And it’s even $10 cheaper at early bird rates (which accounts for almost 50% of the passes allocated). For less than $80 – less than $8 a day – you get access to the two main stages of the festival and the indoor venues for the entire run of the event.

This year – the 47th year of the event – saw the main stages feature the likes of Lady Gaga, The Killers, Queens of the Stone Age, The Steve Miller Band, Journey, Billy Joel, The Bloody Beetroots… the list goes on, and also features a mix of Francophone artists. And then there are the clubs that also feature as part of the festival, where we featured our review of Phantogram earlier in the month. So how is this possible? How is this so affordable? By any standard and all matters of comparison – even events in developing nations – this is incomparable by anything I’ve ever come across.

Firstly, there is the city itself, who allow the event to completely take over its city in a way not too dissimilar from the Montreal Jazz Festival. According to an article in Billboard, Government makes up 15% of the budget. Sponsorship is also very present, with local brands naming each of the stages, such as the main stage, which is simply known as the “Bell Stage”, after the Telco of the same name. All in all, sponsorship accounts for 35% of their budget.

Then they follow a model similar to the Jazz Fest in New Orleans where they operate as a non-profit and though the main event ticket is affordable, there are other offerings to give a more “VIP” experience, where for over $500, you can but a limited release pass (just 3,000 of the some 150,000 available) that gives you access to the front of the main stage – a D-barrier as it were – as well as other benefits.

And though it’s an 11 day event, they don’t assume everyone will attend every day – and the cost is so affordable that some will just come for the one day and the one artist, and still leave with more money in their pocket than had they seen the same band at their own show in Montreal or another city. So, with the main “Bell” stage fitting some 80,000 people on an incredible natural ampitheatre in the Plains of Abraham, they are able to comfortably sell at least double that in passes.

The event ends up bringing in people from all over Quebec, around Canada and from across the world. Great for tourism. But also great for locals. Increased tourism means more money ingested into the local economy. And it also brings locals the sorts of artists who would never have played the city otherwise. With a population of less than 500,000, it’s only through major events like this that a big artist can be seduced. But when they hit the stage and see 80,000 pins flashing in the distance (these serve as part of your passes), it’s surely something they’ll never forget.

As a place for festivals, the Provence of Quebec in Canada seems unmatched. They allow their cities to be transformed for the sake of music and the arts – for weeks at a time – and subsidize the cost in such a way that allows them to be accessible for everyone. And these festivals aren’t the only ones that deliver this sort of result. In Montreal alone, there are some 300 festivals a year, with 25 of them bringing in over a million people. This in turn promotes tourism to the region, and brings in money to local business.

VIVID has proven that we can do the same in Sydney and no doubt the MONA events in Tasmania are reaching for similar results. And though we’ll never get a festival down here quite so affordable as the Summer Festival in Quebec City, due to the reasons at the start of this article, it’s no doubt a model that should be looked at for what is possible to help keep our festivals in Australia from becoming too expensive, and hopefully remind our governments that they shouldn’t become too restrictive towards the arts. But perhaps given the current group in charge, that’s a bit of a pipe dream…

For more details about the festival head to: http://www.infofestival.com/

The writer attended the festival courtesy of Tourisme Québec, Québec City Tourism and with thanks to the kind support of the Summer Festival. Photo of the crowd at Billy Joel by André-Olivier Lyra. Photo of Gaga provided by the festival.

It'll make it much more affordable to own an LG OLED

To launch a new menu, @GrilldBurgers is offering up discounts in exchange for exercise

And it's opening this weekend! #sydney