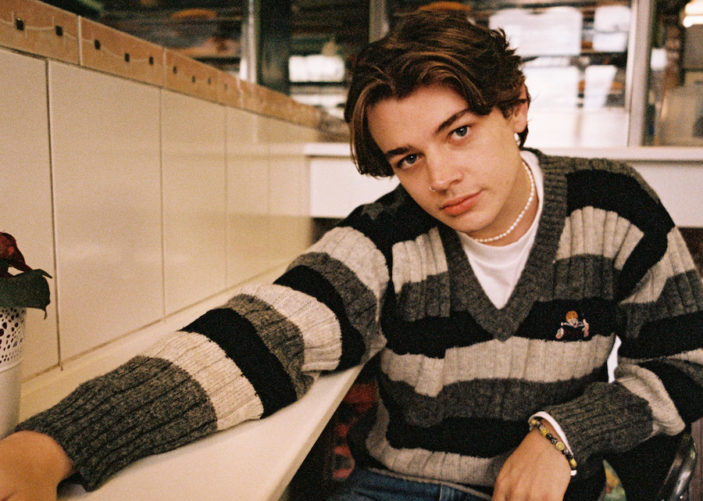 Thomas Headon is one of TikTok’s rising stars, going viral on the platform with tracks “Grace” and “Clean Me Up“, all while a life-size cutout of Harry Styles strategically lurked in the background.

It’s easy to see that Thomas draws inspiration from Styles, from his pearl-wearing aesthetics to boyish charm, though sonically it’s a little more The 1975, as he sings candidly about his dating life, from not making it past second dates to making out on sofas.

His most recent offering, EP Victoria, sees Thomas dive into his past six months, living in Australia and the UK while experiencing his first real love – though, as Thomas tells us, Victoria is just a pseudonym.

In fact, that original move overseas was a prompt from his mum, who set a deadline of a year for Thomas to give music a crack.

“It wasn’t like we shook hands and was like, ‘Okay, go out.’ And I turned around and got on a plane,” he said.

“It was more of just like… she’s a mother. So she wanted me to have a loose plan… And so she was like, ‘Go do it, like go to London, you have a passport, go get a job. Just do it. See if it works out.'”

With a push from his manager to jump on TikTok early, Thomas has since amassed 432k followers, with over 16 million likes on the short-form video platform, and over 1 million monthly Spotify listeners.

With features alongside the likes of Alfie Templeman, G Flip and Chloe Moriondo under his belt, a Groovin’ The Moo slot and Australian sideshows locked in, PLUS dates supporting Sigrid on the horizon, it’s safe to say Victoria is just the beginning for Thomas.

Tait caught up with Thomas to chat about his bright future – watch the full interview below!

Victoria by Thomas Headon is OUT NOW