Interview: Sports Team (UK) discuss their debut album and what it’s like to be Deep Down Happy 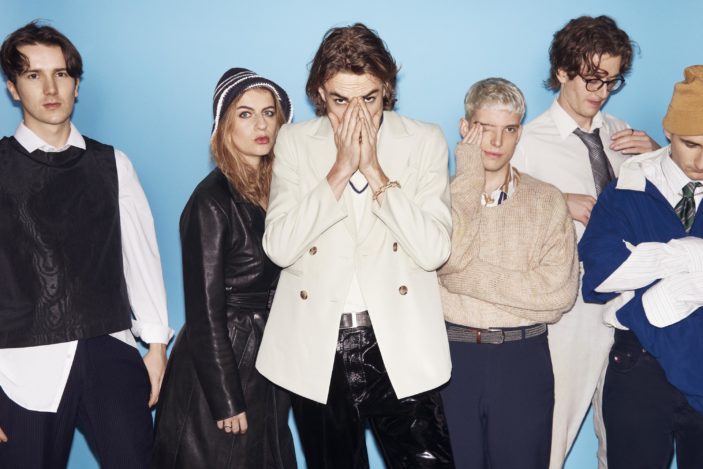 English band Sports Team are on the verge of releasing their debut album, Deep Down Happy, in June. Having postponed its release and all tours on the back of COVID-19, we asked lead singer Alex Rice a few questions about the album, what growing up in England was like, how his lockdown experience has been, and what he’d buy a 60yr old woman for her birthday.

Hey Alex, thanks for sitting with us. Your album, Deep Down Happy, is due for release in June. Was there any part of the recording process or a specific song that made you think “yeah, we’re onto something pretty special here”?

It’d be great to say there were all these one take moments with not a dry eye in the room. It was all more bitty than that though, with tinkering, gruelling late nights and mornings where we’d change everything. We’re really proud of it though. I think you hear all the fights and amateurism in there still, which is what we wanted.

Talk us through the recording process for the album. How did it differentiate from anything you’ve recorded previously?

We played 150 something dates last year so it was always trying to squeeze recording time in when we could. You know, getting back on a flight or a ferry at 4am and being in the studio by 8am. It always felt like a strange segment of a constant tour that crept into the album. Generally, we’d try the songs on stage the night before. That’s the point though really. They’re songs meant to be played live, or heard with your mates over a weekend at a festival; that’s all it is.

The band has spoken previously about growing up in ‘middle England’, which has in turn influenced what your songs are about. Do you think this has been a good or bad thing regarding the evolution and progression of the band?

We’re all from different backgrounds so I wouldn’t want to generalise too much. One of the best bits about touring though is you see every cranny of the country and I think we always get really into the minutiae of the places we visit. Like, why are villages so proud of their roundabouts?

We do less of the suburban mundanity stuff now, “Beverley Rose” (an early Sports Team song) was probably peak that era, but I’m not sure the current crop of songs really sound like that. You could say I think we’re evolving. We’ve just moved back into London to share a house together, so there’s a lot of that in the album. It’s bookended with the lines ‘if you wanna find love you can always go to London’. We’ve got the same kind of yearning, sense of insecurity about it that I think a lot of people our age have.

There’s both overt and covert politically based lyrics throughout the album. Do you think there’s a place for political commentary in music, or should they be kept independent from each other?

Yeah for sure. I think we’ve always been keen to pick holes in and be quite sardonic about the world around us whilst recognising how much a part of the system we are ourselves. I hope it strikes a tone that feels a bit less blunt or patronising than just telling our fans what they should think about things.

The really important bit for us though is getting involved locally. We tried to canvass for Labour as much as we could on the last tour and got quite a few fans involved, which was great.

What’s the COVID experience been like for the band? Obviously not being able to tour or pushing back the release of the album isn’t ideal. Has it given you more time to work together and progress ideas for a follow-up release, or are you just trying to enjoy self-isolation?

We’ve been busy finishing album 2, which is odd not having released our first yet. I think we’re healthier off tour too. Definitely have started to repair a few years of damage. But I think I’d still prefer to be in Mexico City for the final night of our US tour today though…

You’ve managed to develop a pretty loyal following in England and the UK, selling out pretty sizeable venues at the same time. Is there a dream venue or location domestically and internationally that you’d want to play?

Definitely keen to get to Australia. The Netherlands is always a favourite too. Post COVID I can see it being reduced to sweaty small venues for a bit which suits us fine. We’ve always wanted to do a residency like all the old bands used to.

Ashton Kutcher gets a song named after him on the album. Are there any celebrities you’d be stoked to have listen to the album?

If Kutcher finally gets back to us that’d be nice. I’d quite like Angus Young to hear it or Liam Gallagher to quickly dismiss us; that feels like a right of passage. We’ll be pretty happy if our mates get round to listening to it, to be honest.

The English press regularly hail any new guitar bands as the saviours of rock. If Sports Team are not it, what would you want to be the saviour of?

We’re the saviours of rock for sure.

My Mum’s birthday is pretty soon. Are there any albums you’re listening to currently that a 60yr old woman may want to receive for her birthday?

I think the new Fiona Apple album is beautiful. That’d suit her I think.

Deep Down Happy is out Friday 5th June.