Interview: Murph from The Wombats chats about their fifth album Fix Yourself, Not the World, Hottest 100 & eBoy

The Wombats are kicking off the new year in style, about to release their fifth studio album Fix Yourself, Not The World. Lead singer Murph caught up with The AU Review’s John Goodridge about the making of the album; out tomorrow through Warner Music Australia.

Would you say this album is the most challenging one you’ve done so far?

No wouldn’t even come close really.

So, the fact that you’re in different countries recording was OK?

I mean it was it was a shit show, but it wasn’t as challenging an album to write and record and release as maybe our second or third albums. But then the entire recording process of it was a bit bizarre due to you know the world going to hell in a handbasket… but it wasn’t the most challenging.

The album title Fix Yourself, Not the World, is that a reflection on what’s happening in the world now?

A little bit. When I suggested this title to Dan and Tord and to our management label it automatically provoked a huge conversation about it and whether it was appropriate or whether it wasn’t or whatever. Even that was the reason why we should have had to call it the album. It’s not like I’m trying to say that activism is pointless but the ideas and theories that I’ve found people espousing outside of their own homes often contradict when they’re behind closed doors.

Even the last song on the album is “Fix Yourself, Then the World (reach beyond your fingertips)”.

To be honest we called it that to kind of take the edge off, or the perceived edge off, the album title.

Songs like “Everything I Love Is Going to Die” and then you’re saying “Icarus is my best friend” feels like you’re reaching out for something beyond.

To me it’s kind of like the title is grim as hell but you know it should be a liberating song about being present and maybe being a bit more grateful than you are. But then I obviously had to kind of sour it a little bit by throwing the Icarus line. You know if you’re always living in the moment then you can really damage your future self or selves, so yeah, had to throw that one in.

So, there is there a little bit of absurdism and existentialism in there about life.

I think so. Well, it’s certainly pretty absurd at the moment, and then I just like pop songs with a kind of weird, hopefully introspective and profound, lyrics… but I’m always just happy with weird as well.

The song “If You Ever Leave, I’m Coming with You” feels like an ultimate love song.

Yeah, it’s something that my wife said to me at the beginning of our relationship. It lived in my phone for a long time, and I was trying to use it on the 4th album. She was just like you know I think you’re never getting away basically, and there’s something kind of darkly humorous and very sweet in the fact that you’re giving yourself so much that you’re committing to that relationship. It’s a difficult path but it’s the most rewarding one.

Then we have “People Don’t Change People, Time Does”; that’s an interesting one as well. Over time we change but being influenced by other people doesn’t affect us?

It’s more about people trying to change other people from the inside out, and I’m sure it obviously is possible, but it’s quite futile and if people want to change, they’ve gotta figure that out within themselves. I guess figuring that out is something to do with time, but yeah that’s kind of an odd song. In my head it was about this aspiring actor arriving in Los Angeles the first time, with all these hopes and dreams, and then just seeing them just slowly, slowly being ripped apart.

Now with 270 million listens on Spotify, when you see those sorts of numbers what do you think inside your head? Is it just a number or when you look out over an audience and you can see let’s say 10,000 thousand people you can see them, they’re real, but when you see a number on the screen it seems bizarre?

Honesty we’re thankful. It’s obviously an amazing feeling I’d say it’s starting to look a little bit overwhelming… sometimes I don’t think we can quite wrap our heads around it. We just know we’re really happy.

You know you have a big following here in Australia with the Triple J Hot 100, four of your songs are up for grabs. In a way I guess they’re fighting against each other. Someone might put all four songs up; someone might pick their favourite song.

Let’s say three of them are fighting for each other. I’m sure that “If You Ever Leave, I’m Coming With You” might kind of move away from the pack a little bit, as it was the main single. Triple J’s Hottest 100 is amazing you know that’s kind of cool that it’s voted by the listeners and you know it’s really cool whenever we get in. Not many stations do stuff like that and they probably should.

I see also that you’ve got cassettes as one of the options that people can buy, I mean that the whole marketing with the artwork and the NFTs and the cassette you know it’s really gone super digital.

We’re honestly just trying to capitalise on how cool the artwork is. I’ve always wanted to work with eBoy ever since I saw their Groove Armada cover, it was just so engaging. I was really happy that they said yes, and I love it so much. 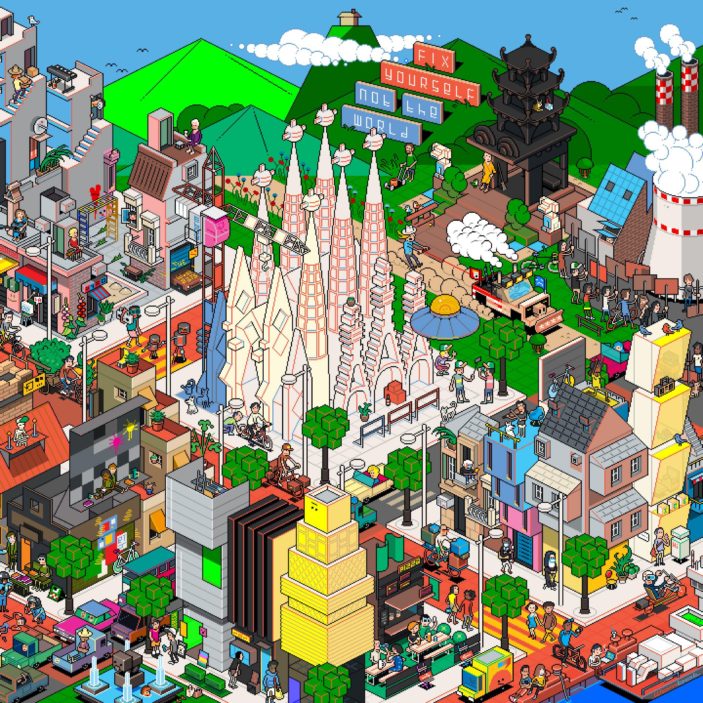 We’ve got the original at the framers ready to go up on our walls. I had an idea of what I wanted the album cover to be, inspired by their earlier work and I just wanted this political kind of mess of the metropolis going on, maybe the odd thing that we’ve seen over the last few years. He loved the idea and we bounced a lot of ideas off each other and the first thing they sent was great, then we edged it up a little bit.

He was involved in the video clip as well.

I’m not sure what they do I think they send all the little images to the people who made the video and then they do the rest. I’m not too sure how that works but it’s cool that that video kind of delves into the city and what’s happening more so than maybe the artwork does.

Which song is your favourite out of the album?

“This Car Drives All by Itself” – I can’t remember who I was talking to, but someone said this phrase, “We row but the universe steers” and I think that’s a common theme throughout the album. This idea of letting go of the idea that you are in control of things as you think you are and be OK with accepting that. I was searching for a less heavy way of saying that. I was walking my dogs and a Prius drove past and I couldn’t see anyone driving it. I was like OK right yeah so, it’s like a take on “we row but the universe steers”. To me, it’s just about letting go and getting out of your head and not listening to every single thought that bounces in there.

Overall, it’s a very self-reflective sort of album which I think it reflects the times we’re in now. It’s great album and I’m sure it will do well and I’m looking forward to seeing you down in Australia live next year.