Interview: Moon Duo (USA) talk Stars Are The Light and bringing the Lightship to Australia 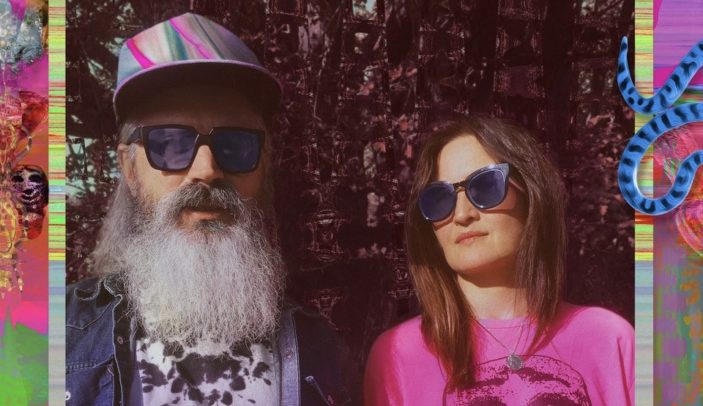 This week the band bring the record down to Australia. Kicking off on February 9th in Hobart the tour will take in the East Coast capitals, before finishing at Perth Festival’s Chevron Lighthouse on February 15th. But, this won’t be any ordinary tour. Instead, the duo will be performing inside a perception-shifting, visual environment light box inspired by ’70s discotheques and the psychedelic experience.

Ahead of the tour we caught up with Moon Duo’s guitarist and vocalist Ripley Johnson to find out more about Stars Are The Light and what audiences can expect from their new live show.

How would you describe Moon Duo to the uninitiated?

We‘re usually called psychedelic rock, which is probably just vague enough to describe all that we do.

What was the inspiration behind your new album, Stars Are The Light?

We were inspired in large part by classic disco. But being a psychedelic rock band, our version of that is really its own thing. We wanted to make something that was inspired by positive vibes, inclusivity, and groovy rhythms.

Was there a particular sound or song that kicked off the new direction?

It was more a desire to do something positive, after being drowned by the negativity in American culture right now. But for a sonic touchstone, I guess it started with our 12” sessions with Sonic Boom the previous year. We did covers of “Jukebox Babe” by Alan Vega and “No Fun” by the Stooges, but with floaty grooves and sparkles on top. It was a limited thing, so we felt really free to try something different.

You’ve mentioned in press materials that the nature of your collaboration has changed. How has your practice changed over the course of seven album cycles?

When we started out I think I had more influence, just from having experience in bands. It was really Sanae’s first musical endeavor. That has changed over the years, and a lot of the sound revolves around her amazing synth work. I was really inspired by her Vive la Void project.

Stars Are the Light is an eminently danceable record, how important a feature was that for you as a band?

That has been important from the very beginning. We started with the idea of using repetition to inspire movement (and trance), which seems obvious now. At the time that was less common in rock ’n’ roll. And of course people don’t usually dance at rock shows. If you play a record they’ll dance. But that’s always been something that we were into.

Place is hugely important. Not so much any particular scene but how a place makes you feel while you’re working. We’ve mixed most of our records in Berlin, which has a very particular vibe.

Mixing this one with Sonic Boom in Sintra, surrounded by mountains and beaches and lush succulents —it felt like we were on another planet. A beautiful jungle planet! That influenced the mixes right away. Early on we listened to some mixes back in the city and we were like, what is this? What are we doing? It’s good to have that strong influence I think.

You’re just about to head to Australia on tour, what can audiences (who might not have caught a show before) expect from a Moon Duo gig?

We’ve been doing our latest shows in what we call ‘The Lightship.’ It’s a multidimensional, multimedia experience. It is hard to explain and even video doesn’t really capture it. It’s an immersive sound and light experience that’s fully psychedelic. A really fun night out.

The album’s been out a couple of months now, how have the new songs been going over live?

They’ve been going over very well. It’s always interesting to see which new songs work in a set. Often you end up adding two, maybe three songs, the ones that fit best with the old stuff. But these new ones are quite different, so it really colors the entire set, and creates a really special vibe. It will be fun to bring down to Australia, which I always think of having such beautiful light and warmth.

Stars Are The Light is available now. The Lightship hits Australian shores later this week, kicking off in Tasmania on Sunday. Full dates below, for more information and tickets head HERE. Keep up to date with Moon Duo via Facebook.