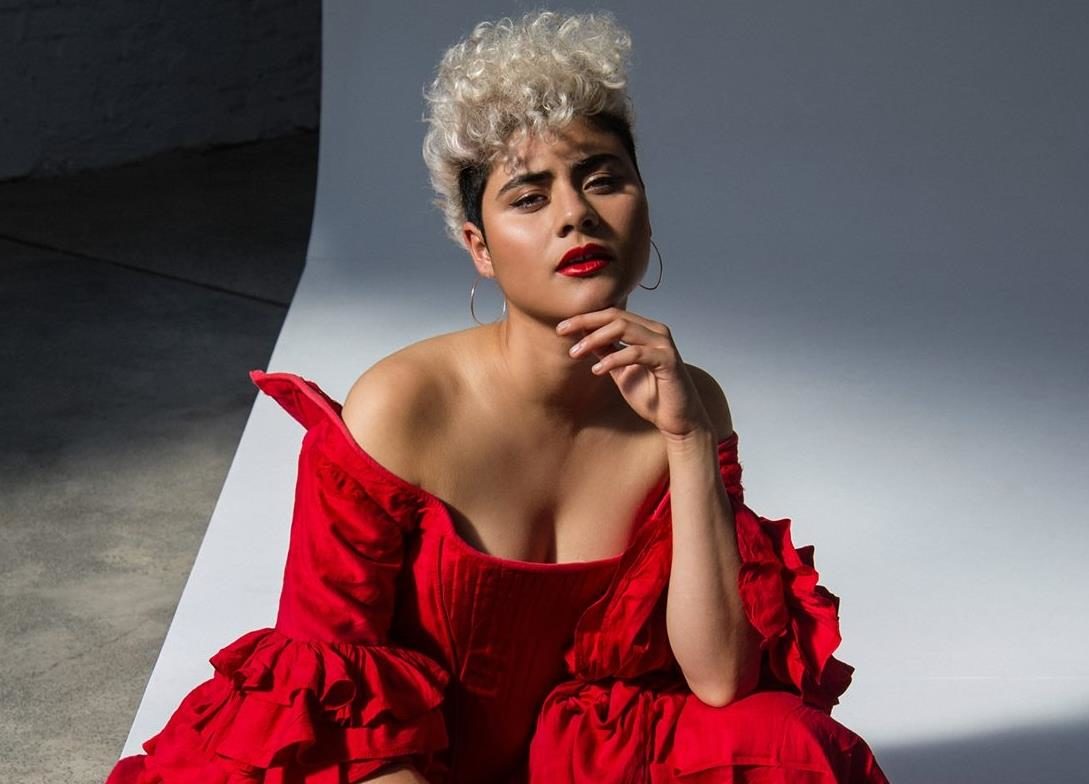 With some of the themes that Montaigne portrays lyrically, it is hard to believe this Sydney singer is just twenty three years old. Then once you hear how in touch she is with her sense of self, the world around her and educating others and you’ll instantly be in awe.

After finding roaring success with her debut album Glorious Heights in 2016 and taking home the ARIA for Breakthrough Artist the same year, she’s now following it up with Complex – an equally as impressive body of work that bridges the past three years for Montaigne.

We got to chat to her ahead of the album’s release on August 30th and pick her mind about her inspired experiences, her thirst for knowledge and being an ‘over-doer’.

How are you doing, Montaigne? Where are you right now?

I’m in my room in Sydney.

Oh nice, it’s such a nice day in Sydney today!

Yeah, I haven’t been out because I’m sick, so I’m just watching The Gilmore Girls and listening to The Roaches.

That’s so dreamy! Straight off the bat, congrats on your sophomore album Complex which is out August 30th. I had a sneaky listen to it already, and I am just so shocked that you’re twenty three and writing these thematically diverse and empowering stories. I’m twenty two and listening to you is like, “Oh my goodness, I have not lived.”

I’m sure you’ve lived! It’s funny that you say that because I wrote “I’m A Fantastic Wreck” when I was sixteen with the feeling that nothing in my life was happening and wanting something to happen so that I’d be more interesting. And the thing is, at the time, heaps were happening to me, I just wasn’t cognisant of it. So, I’m sure you’ve got some stuff – maybe you’re just not paying attention.

I mean even in saying that, Montaigne, you’re named after the philosopher Michel Le Montaigne and he asks, “What do I know?” and that was literally what I was asking myself the whole time listening to your album. So, if anything, you’ve transcended. You’ve become your muse.

That’s a good thing, I guess! He’s a very wise human being.

It’s an excellent thing. So, let’s talk about it: Glorious Heights came out back in 2016 and was largely inspired by a tumultuous ex-boyfriend, and Complex is an extension of that experience in some songs – has following it up helped you to heal at all?

I guess… I think so. I feel like music is only partly responsible for that. Healing isn’t usually a unilateral process; it’s something with a lot of intersecting points. You know, friends and time and journaling, meditation and therapy. All that stuff also helps.

I agree, it’s not as though you can bang out one song and go, “Oh wow. I can put that to rest now.” Do you know if he listens to your music? I read that he’s in Israel trying to reach enlightenment, right?

I don’t think so. He doesn’t listen to pop music and he’s never really listened to mine, so I don’t think that’s changed.

Interesting, and Complex, for a lack of a better word, is more complex than just that relationship. You tackle loneliness, body image, burn out, environmental issues… Is there a certain song on the album that you’re most keen to share with your audience that they haven’t heard yet?

I guess “Is this all I am good for?”, which is towards the back-end of the tracks, but it feels like the linchpin of the whole thing. Even though it’s not the middle, it still feels like the paragon of the entire album. And also the most vulnerable and tender moment… because I feel a lot of my songs are like loud and trying to obfuscate the actual darkness of vulnerability with their sonics, but that song I think is like one of the few, and one of the best at just taking that all away. Just being honest in still a very frenetic and troubled way but there’s like a gentleness to it – I think that’s quite beautiful.

You’ve got some great diversity across the album. I feel like you, personally, have such a thirst for knowledge. Is there an influence in your life where that has stemmed from? Did your upbringing or something else make you prioritise your self-actualisation?

That’s the billion-dollar question! If people could answer this question, there would be science programs on it right now.

Oh God, you know… I feel like there was always an innate curiosity for me going through the world since I was a little, little, little baby. But, I don’t know, my parents always encouraged me to do well in school and to be focused and read a lot, and to do and try everything, and they always believe that I could do everything and anything.

So, I kind of tried to and in that trying, I guess I sort of built this playbook for myself where I could open it up and be like, “Oh yeah, I’ve had a taste test of this and this and this before, so I could try all those things again and maybe add something else that has a transferable skill later.” So, I think it’s partly my parents, partly school, partly personal brain chemistry… I don’t know! A weird cross-section of those things.

They’ve built you an incredibly broad foundation of skills that you can build up from there – there are so many different hats you can put on!

You’ve talked about it in the past that you’ve suffered from burn out. What tip would you give to people who are ‘over-doers’?

There’s no simple answer. I had to go deep into my childhood and my psyche and my relationship and the values that I adhere to, and then recalibrate all of those values and re-engineering my philosophies. I think becoming purpose and meaning driven rather than result-oriented really helped. I now do things which are meaningful to me and I now have an understanding of what is meaningful to me rather than saying, “Oh I can achieve this, so I will do it.” Now, instead of wanting to be good at everything, I just want to be good at the things I want to be good at. It’s about finding that transition between the things you want to be good at versus everything.

The thing is, no one really in their soul wants to be good at everything because it’s impossible. So, for me, it was figuring out why I wanted to be good at everything, what my childhood event or patterns or whatever added up to that, and so many other things as well. What my expectations I had for myself were, the value I put on my body and my energy and just being able to reassess all of that comes to a newer, healthier place.

For me it was, “My life is driven by purpose and meaning and putting my energy… That’s my most valuable currency, and my relationships are absolutely crucial, having connections to other people are also crucial so I need to be able to contort myself and give myself in such a way that will allow me to forge those connections with other people.” And I think that whole transformation psychologically is what’s put me in a good place now.

That’s such a big realisation! I guess that’s loosely related to focusing on the journey and not the destination, in that you focus on what’s along the way and not the result at the end, right?

Yeah, think about it this way. When you play a video game or a role-playing game and you’re the protagonist, a lot of the games nowadays – there’s obviously like a big Boss Battle thing to achieve at the end – but throughout the game, you have these side quests that you can do, and often the side quests involving helping someone in some way, right. And the reason why you, as the protagonist, do those side quests is because you think it’s important to help people and you find value and fulfilment in helping people in that way. What you’re doing at the end of the final Boss Battle is also helping people in some way – they’re all the same tasks, just on a different magnitude. Instead of thinking of those things as individual tasks, you think about the one united purpose which is helping people, then you have a sense of constant fulfilment because you do that all the way throughout the journey, even to the end point you’re doing the thing you set out to do. You know what I mean?

Yeah, absolutely! A constant level of fulfilment. Montaigne, before I let you go, we should mention you’re hitting the road in November on a 13-date tour of Complex. Do you love the touring life? Do you find it easy to keep balanced along the way?

Uh no, I hate it. I love performing. Being on stage is the most euphoric experience one could possibly have. Singing people your songs and being able to connect with people who love your music… everything else is dog shit.

Everything else is a challenge, and that in itself is good, but sleep deprivation, never eating a home-cooked meal, being far away from your friends and family, and waiting around a lot in periods that don’t really allow you to focus so it’s hard to stay attentive to a book or to writing or to any kind of productive or constructive activity is almost rendered impossible. It’s just the worst possible… I just think it’s such an annoying way to spend one’s time but at the same time, for me, it’s just the cost for the huge pay off which is performance.

That’s it. Living transiently is the price you have to pay.

It’s fine for some people. Some people love it, but I personally hate it. It’s not for me.

I don’t think it’d be for me either. But hey, congrats on Complex, it’s amazing. Good luck with the tour and hopefully I can catch you in November.

Complex is out August 30 and is available for pre-order HERE.