Interview: Middle Kids talk touring the US in a pandemic, ARIA win and Jameson House of Rounds 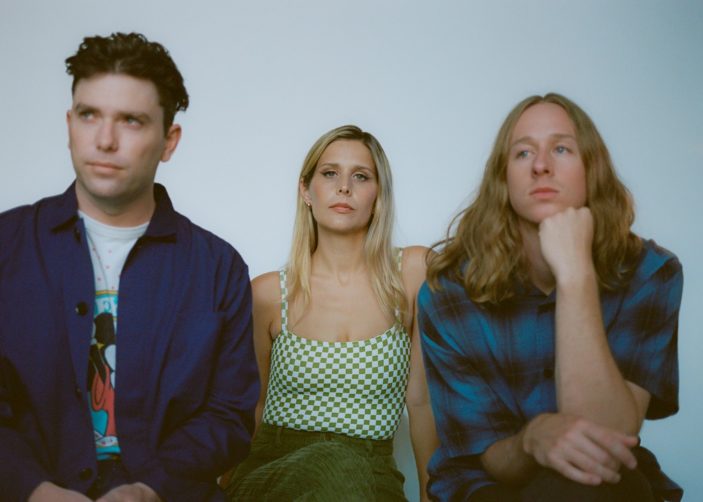 Sydney indie-rock trio Middle Kids have quickly become one of the country’s most prominent and adored bands, capturing hearts worldwide with their gritty pop anthems and unparalleled storytelling. And it’s been another another huge year for the band, with the release of their new album Today We’re The Greatest in March, a national tour in May, a US tour in September and October, before coming home to claim Best Rock Album at this year’s ARIA Awards.

We sat down with Middle Kids before their set at The Rails in Byron Bay for the Jameson House of Rounds to talk tours, awards and whiskey.

“We stopped for a fair while there with the old global pandemic,” Tim (bass) laughs when addressing the band’s extraordinary efforts. “We just had an amazing time in the States, so it was just awesome playing shows again and being in some of those cities that we love.”

“Before that, we kind of just always said yes to everything,” Hannah (vocals, guitar) explains. “We were just kind of like little road doggies, so it was definitely a challenging time to shift in that way. We’re really trying to get back to it. It was so fun, we almost forgot!”

Middle Kids embarked on a 20-date tour of the US during September and October while their hometown was still emerging from crippling restrictions. They are no strangers to the US, with appearances on international festival stages and late-night television shows keeping fans eager for the trio’s return.

Jameson House of Rounds in Byron Bay is one of many festival slots the band has lined up, as well as supporting Crowded House on their Dreamers Are Waiting Tour next April and Vance Joy on his The Long Way Home Tour in October and November. Middle Kids covered the classic hit ‘Don’t Dream It’s Over’ for triple j’s Like A Version in 2017, which has clocked over 700k views.

“We were stoked,” Tim says about the band supporting Crowded House. “They’re like a legendary status band. That’s a type of band you would never think that you would be able to meet and chat to,” he explains. “We’ll probably have some tears when we’re playing.”

“Their songwriting is quite inspirational to us,” Hannah adds.

As if coming off the back of a national tour and a lap of the US wasn’t enough, Middle Kids also won Best Rock Album at the ARIAs for their sophomore record Today We’re The Greatest.  The band were in some great company on the night, with fellow nominees including huge local acts such as AC/DC and Midnight Oil.

“I think we were delightfully surprised,” Hannah says of the win. “We were just happy to be there to be honest, and the other records in that category were by such wonderful artists that we were really honoured. It felt like a cool moment for us to get that after these two years and touring the US.”

We asked the band what it was like to perform in Byron Bay after such a busy year and spending time abroad. They love the area and play shows there but don’t get to stay long due to the nature of their visits, although it’s a place that encourages you to slow down.

“We’re just grateful to be back in those spaces with fans and people who like live music,” Harry (drummer) explains. “Even just when we were in the US, it was a lot of people’s first show back since the pandemic, so it’s quite a special time for people to be reconnecting. I feel like we’re all appreciating it on a new level.”

Keeping it close to home gives the band a chance to wind down from the high of touring and winning an ARIA without losing momentum. So, to wrap things up, we asked them what each of their drink of choice is for such an occasion.

“I remember I took some Jameson camping once and it was a good thing to just sip out of a Jameson flask,” Tim says. “I found it was quite smooth to drink next to the fire.”

“I don’t really drink that kind of stuff,” Hannah says. “I like different things – a negroni is probably my drink right now.”

And for one final treat, here’s their cover of Olivia Rodrigo’s ‘Drivers License’, from earlier this year: