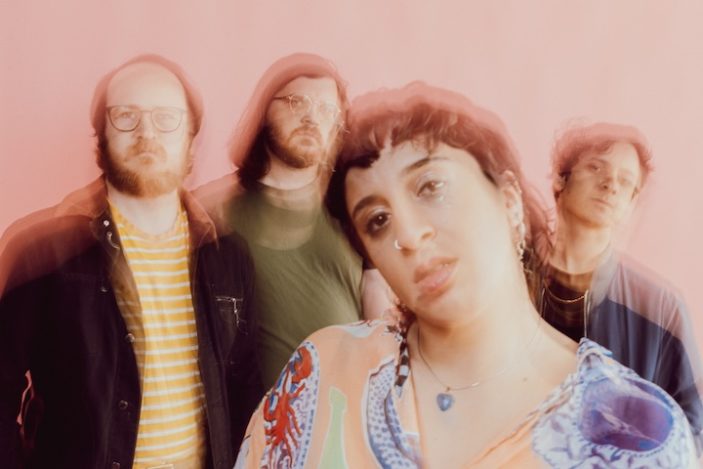 Let’s start with the history of the band. How did you get together and what made you like the same sort of music?

It’s funny we all met at university together and we kind of all started in 2013, so just coming up to 10 years since we all first met. The band started while we were all in our studies studying jazz. Anyway, a couple of bands that existed throughout the first few years of uni kind of fell apart. Out of that, there were a couple of people who still really liked playing together and that’s where we started. It kicked off with Maddie Mallis, our lead singer. She said she had a couple of songs and would really love to throw something together. Here we are nearly eight years later, still playing.

So, with Maddie as the songwriter; does she write the songs herself or is it more of a collaborative process?

Through the history of us playing together, it’s really grown. When we first started it was very much like Maddie wrote a couple of songs and we worked arrangements out together. We have this kind of structure where someone will come in with a riff or someone will come up with an idea and it’s just by sitting and playing in the practice room together that so many of our songs come together. It’s a much more collaborative process that I’ve come across than in a lot of other bands I’ve played in, which is really a lot of fun.

You have a very happy upbeat sound; who are your influences?

Even though we all share this jazz study background, we all have different playing influences. A lot of us bond over a strong love of like the indie sound of bands like Ballpark Music and Vampire Weekend. That’s something which I think is crucial to us. Our bassist Gideon Traurig is super into bass-playing people like James Jamerson and Motown bass lines. Rhyan our drummer has an amazing profile as MC Dobby. I’m working in hip-hop, so between the two of them, there’s this really driving rhythm section that’s just crucial to how we all field time together.

What about yourself – who’s your favourite artist?

I grew up really listening to a lot of like 2000’s alt and Indy bands like Radiohead and Bloc Party. Those jangly guitar lines that soar over a rip-roaring bass and drum section, to me will always be so exciting and so infectious. I think you get that in some parts, particularly the second verse of “Who’s Gonna Know.” There was this breakdown and I just wanted to hear gradually building echoes of jangly guitar sounds. The second verse emerged.

Was this song written over COVID or post-COVID?

It came about just before COVID and was just about ready to go. All the tour strategy and release plans were there and then 2020 was what 2020 was. This EP that this is gonna be off is a bunch of music we’ve had in the pipeline for quite a while, but we finally got the time and space in context to put it out and give it the space it needs. “Who’s Gonna Know” is a song that’s really grown a lot on us over the past few years of playing it. To be able to finally put it out in a proper release with a video that we’ve put together. It was put together with a couple of people that Maddie has met through her studying afters.

Can you tell me more about the video?

Every release coming up from this EP has a paired video release. That’s an important thing for how we want to tackle this EP. This was interesting ’cause a lot of our other videos have had this strong clear following in narrative where the band is not necessarily so present in the actual run of the video. For us, it was a cool idea to see how we could use a minimal setup to create something that was exciting from start to finish. Luckily a close friend of the band had access to a recently abandoned warehouse that we could shoot a video in. We thought we’d go right into that early noughties warehouse live band aesthetic and just rock out in a warehouse with projections.

The idea of the song is reckoning with nostalgia and the nostalgia we have for places that we associate with ourselves. Over time there’s almost this decaying factor to it. We were in this rustic space, all rocking out and over the top of us we have these projections of actual childhood memories of ours. We all went back and raided our childhood bedrooms and photos. We tried to find things about homes and there’s just a lot of little Easter eggs that have a lot of personal meaning to us, but all set inside this dilapidated warehouse.

It sounds like that for you guys, the video is part of the whole experience.

Maddie is currently studying a masters in screen composition and she’s always being heavily involved in film. Rhyan similarly has been involved in a couple of First Nations film composition workshops recently. There’s always been this desire to make whatever we put out in visual or film to be strongly connected to whatever artistic narrative for that release is.

Your next step is going on tour?

That’s in the pipeline. This is the third release from our upcoming EP, so we have our single launch on the 18th of November, at Vic on the Park in Sydney. That’s going to be fun. We’ve also got Safety First touring, an exciting Sydney act led by this amazing songwriter Lexie Green. They have this awesome kind of awkward onstage dynamic that’s just infectious. They’re also releasing a single the same day, so we’re doing a double bill, where they’re support. Then heading into 2020/2023 there will be the EP to come.

What’s the best way for people to follow you? What’s your favourite social media?

We keep active on Instagram, and we also use our Facebook page regularly. We haven’t quite jumped the Tik Tok boat yet. That’s probably our main two avenues to lookout for us. We try always keep across that stuff whenever we’ve got tours or gigs coming up.

Jackie Brown Jr will launch ‘Who’s Gonna Know; on Friday November 18, at the Vic on the Park Hotel, Sydney.